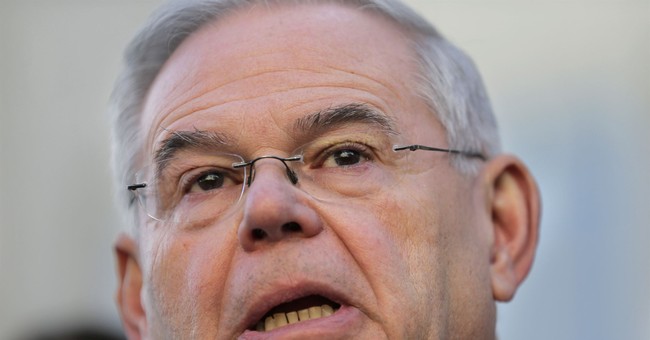 It's a mirage, right?  I still cannot bring myself to believe that the New Jersey Senate race is actually in play for Republicans, but consider a few factors: (1) Dropping one seven-figure October ad buy in the Garden State might be dismissed asa cash-flush party acting out of an abundance of caution.  But dropping a second tranche?  That's not easily spinnable.  In fact, this very much looks like genuine concern:

.@MajorityPAC, is making an $2.8M ad buy in the NJ Senate race, reports @DavidWright_CNN. That is on top of the $3M buy they placed last week, putting their total spend on that race at around $5.8M.

CNN moved the race from Likely to Lean Democratic earlier this month.

Nearly six million bucks in the last few weeks of the campaign feels like a brewing emergency that Democrats are desperate to stave off.  What are they seeing that prompted this deluge of cash?  (2) Maybe some more internal polls that resemble this one?

The latest Rutgers-Eagleton poll has Menendez leading Hugin 51 percent to 46 percent. But Menendez’s 2017 federal corruption trial- which ended in a mistrial- weighs him down with independents. https://t.co/7Jw1BPUauI

Hugin is a self-funder who's been hammering Menendez hard and building late momentum.  (3) He's even made history with a somewhat unlikely endorsement:

I cannot imagine that Chuck Schumer's 'Senate Majority PAC' is pleased to be bailing out a deep blue state Democratic incumbent with corruption issues, but that's where we are.  And speaking of Menendez's ethical woes, one twisted irony in all of this should not get lost in the shuffle: "When the feds came after Menendez and his buddy Salomon Melgen for bribery, they flagged $600,000 that Melgen had donated to a Democratic group as part of the quid pro quo on Melgen’s end. That group? The Senate Majority PAC, of course. What a sweet deal for Menendez: Not only was his party willing to overlook all that courtroom unpleasantness and offer him another term in the Senate but the PAC his crooked friend Sal “invested” in is now repaying Menendez with a fivefold expenditure to his reelection campaign."

I'll reiterate that I fully expect Menendez to pull this one out, but the stench emanating from his campaign is worrisome enough that national Democrats are diverting precious resources to save him.  There's political blood in the water; if the cycle were slightly more favorable to Republicans, this one might be a bona fide toss-up.  What do you say, New Jerseyans?  On the subject of bona fide toss-ups, one Senate race that's been essentially deadlocked for months is the Nevada contest, which just saw some movement:

Again, count me as skeptical on this one. A few recent polls have shown Republican Dean Heller opening up a lead in the mid-single digits, but some of the internals look suspect. Yes, two other surveys taken this month also give Heller an edge, but well within the margin of error. I can buy that the needle has moved toward Heller a little bit, but this race still looks and feels like a jump ball. I should add that a jump ball is pretty damn impressive for Team Heller, considering that Democrats had been telling anyone who would listen for more than a year that he was toast. Many media types ingested the Democratic assertion that he was the most vulnerable Senate incumbent in America. It's now pretty clear that he's not. That title belongs solidly to this person.  My midterm analysis has always been pretty cautious, but it's worth pointing out that even mainstream outlets like the Associated Press are starting to report that things may not be looking quite so hot for Democrats over the home stretch:

In the closing stretch of the 2018 campaign, the question is no longer the size of the Democratic wave. It’s whether there will be a wave at all. Top operatives in both political parties concede that Democrats’ narrow path to the Senate majority has essentially disappeared, a casualty of surging Republican enthusiasm across GOP strongholds. At the same time, leading Democrats now fear the battle for the House majority will be decided by just a handful of seats...While the trend may be troubling for Democrats, the evolving political landscape remains unsettled two weeks before Election Day, even with millions of votes already cast across 20 states. There are signs that the Democrats’ position in the expanding House battlefield may actually be improving. Yet Republican candidates locked in tight races from New York to Nevada find themselves in stronger-than-expected positions because of a bump in President Donald Trump’s popularity, the aftermath of a divisive Supreme Court fight and the sudden focus on a caravan of Latin American migrants making an arduous trek toward the U.S. border.

The president's improved approval rating isn't merely reflected in an "outlier" poll or two. It's a real trend:

The mid-40's is exactly where many Republican strategists have been hoping Trump might end up by early November. I'll leave you with 'wow' updates from two more key Senate races.  If Republicans can't beat either of these two, it's going to be a long election night:

WOW. Less than two weeks until the election and some MO Dems are attacking *their own* nominee after she attacked some of them. https://t.co/b8GElD9zKw

UPDATE - The New Jersey race has been shifted to "toss-up" status by the Cook Political Report.