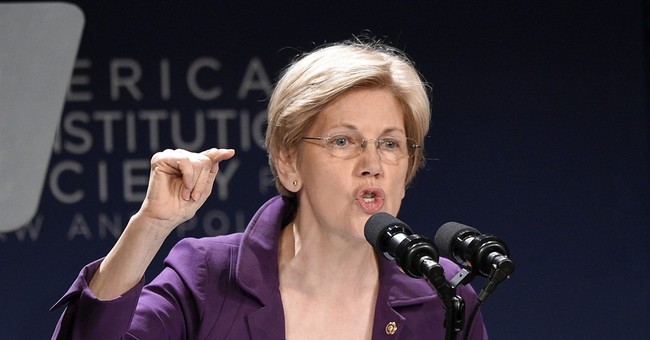 Like many conservatives, I've been a critic of Sen. Elizabeth Warren for years.  She's a hardcore statist and collectivist whose views on nearly every major issues are, in my view, deeply wrong-headed.  I've also been writing about her dubious-to-fraudulent "Native American" gambit for quite some time, having featured the matter during an examination of the Left's obsession with "privilege" in my 2015 book, End of Discussion.  Warren is not a Native American, yet there's strong circumstantial evidence that she identified as one for a very discrete period of time in order to advance her career.  It is therefore unsurprising that I greeted her latest, ludicrous endeavor to justify her so-called 'heritage' with scorn.  So did many others who generally share my worldview.  What may be slightly more surprising is that a fair number of leftists are also heaping criticism upon her.  Some are bemoaning her tactics and timing (why now, a question I took a stab at in my previous post), but others are flaying her on substance, too.  Here's one such offering, published by a Native American at the left-wing site Think Progress:

Warren’s insistence at defending her claims to Cherokee heritage at all costs is dangerous, self-serving, and harmful. In response to Warren’s highly orchestrated media roll out, the Cherokee Nation released a statement that her use of the DNA test was “inappropriate and wrong” and that her continued claim to Cherokee heritage is “undermining tribal interests.”...It’s important that non-Native people walk away from this mess with the correct conclusion that Native people are the authority on who is and who isn’t Native...The science behind Warren’s specific DNA test used examples of Indigenous people from Mexico, Peru, and Colombia, and included no sample from anyone who is Cherokee or even another Native American tribe from the Southeast (Cherokee traditional homelands). The test only shows that Warren may have an ancestor who was from North, Central, or South America...DNA tests have no way to determine tribal heritage and it’s a gross misinterpretation of both the science and tribal sovereignty to claim that they do...Warren could have put this issue to rest years ago by simply apologizing for listing herself as a minority during her academic career and for touting her supposed Native American heritage over the years, and by admitting she made a mistake, which she still refuses to do.

Some of Warren's defenders emphasize that she's not identifying as a Cherokee -- but they fail to add the important qualifier, "anymore."  For years, Warren said she was a Cherokee (though she only formally listed herself as a racial minority in a professional directory used by law school deans for hiring purposes over a period of nine years, during which she was coincidentally hired into the Ivy League.  She promptly 'de-listed' herself upon receiving tenure at Harvard).  The Cherokees have repeatedly rejected this claim, doing so again this week following her pseudo-scientific DNA test stunt.  Under their rules and traditions, Warren is not a Cherokee.  She never was.  Even under the genetic analysis Warren presented, she may have a lone relative six-to-ten generations ago with Mexican, Peruvian or Colombian blood.  Zero real Native American DNA was used in the test she's now touting.  It's possible that the average white person in America is more "Native American" than she is, though genetics experts say that claim isn't as clear cut as some have made it out to be.  It's impossible to tell in her case anyway because -- again -- even her own DNA results (decried as irrelevant by her supposed tribe) did not identify any ancestor with Native American DNA because the geneticist who conducted it admits he lacked access to Native American DNA.  He was therefore forced him to use the aforementioned 'stand-ins.'

When people ask what should "count" as being "Native American enough" (or black enough, or Latino enough, etc.) in the realms of professional hiring and university admissions, I'm not sure there are easy or clean-cut answers.  Crafting such policies can be a fraught adventure, in which complicated interests must be weighed.  I suspect many Americans would draw a line to exclude applicants who are more than a few generations removed from an ancestor of a certain race or ethnicity.  For instance, should an overwhelmingly white person be permitted to gain academic or career advantages by claiming to be "African American," based on a fractional and distant piece of his family tree, or a DNA test?  Or would that be cynical exploitation?  At some point, such machinations look like transparent and self-interested abuses of race-based affirmative action (to which I'm generally opposed anyway).  Warren falls into this category.  Under this scenario, unfortunately for her, the "what counts?" and "who decides?" questions actually have a straightforward reply: The Native American tribes decide what 'counts.'  On this score, writing at Current Affairs, a liberal who describes himself as an admirer of Warren's politics takes apart her "indefensible claim:"

These are things Warren should not have done, because she is not a Native American. It would have been easy to apologize. To say that, like many white Americans, she has a family story about being part Native American, and she got carried away with it. Instead, however, Warren has reaffirmed her claim...Warren has reinforced incorrect conceptions of what it means to be Native American, saying at one point that she “knew her grandfather was ‘part’ Cherokee because ‘he had high cheekbones like all of the Indians.'” ...Now, Warren has released the results of a DNA test that she claims proves her claim to be part Native American, thereby justifying actions such as listing herself as a racial minority, allowing Harvard Law to claim her as its first woman of color, and calling herself Cherokee...If the test proved anything, it proved the opposite of what Warren said it proved, showing that her claimed ancestry is almost negligible at best. The test showed Warren to have between 1/64 and 1/1024 Native ancestry, with one ancestor six to ten generations ago, meaning one person probably in the 18th century and possibly as far back as 1700. By this standard, a very, very large number of white Americans could list themselves as being “Cherokee” in the tribal cookbook. More importantly, though, the use of the DNA test was itself both questionable and insulting to Native Americans...I don’t understand why Warren would go to the trouble of taking the test and having a sleek professional video made if she hadn’t first consulted with the Cherokee Nation itself to see what she ought to do. That, to me, suggests a disregard for the interests and opinions of Native people.

He may not understand why Warren would do this, but I have a hunch: She doesn't really care about the Cherokee Nation or Native Americans.  They've complained previously that she hasn't engaged with them in her various capacities as a public official, and she also ignored her supposed cultural 'in group' while in the Ivy League (blowing up her preposterous explanation for why she ceased self-identifying as a Native American shortly after attaining the job security of a tenured position at one of the nation's most prestigious institutions).  She ran the test and produced the slick video to try to defuse the issue for a political audience.  And she released it three weeks before a major election because she selfishly wants this question to feel played-out and old by late 2019; there was no time to spare.  The essay concludes with the author, who counts Warren as among his top two favorite elected officials in the country, asserting that this problem remains a "massive political liability." If she runs for president, he says, Warren "has shown that she would handle it badly," and is therefore not a "serious presidential contender."  I'll leave you with this, in case you missed it earlier:

Nikki Haley: "So this year you wanted to spice things up again, right? I get it. You wanted an Indian woman, but Elizabeth Warren failed her DNA test?" https://t.co/kJnUl9xg2j pic.twitter.com/a5l1LDL4B1