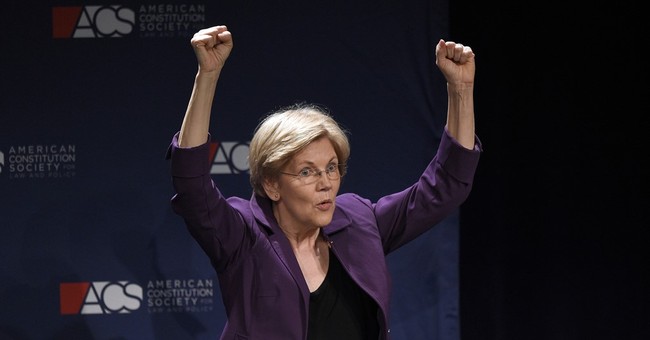 Katie mentioned this story earlier -- but having written about Sen. Warren's stolen privilege in my book, I wanted to take a crack at this new information, too.  In case you missed it, Warren has released a new "fact" sheet about her supposed Native American heritage, along with an online video:

Conspicuously absent from this mini-film? Any actual Native Americans.  The clip does, however, show (a) various members of her family confirming that there was "Indian" folklore in their history, (b) various faculty and officials from law schools where she taught praising her skill and denying any knowledge of her claimed ethnicity playing a role in her hiring, and (c) a genealogist concluding that she has Native American blood in her heritage.  All of this content is interspersed with snippets of President Trump ridiculing Warren as "Pocahontas," setting up an obvious dichotomy aimed at Democratic primary voters: Ingest my spin, or side with Trump.  What to make of this?  These two top takeaways strike me as correct:

Elizabeth Warren releases a DNA test that confirms she’s between 1/32 and 1/512 Native American.

By the way, the Boston Globe has since corrected its math: The test found that she might be somewhere between 1/64th and 1/1,024th (!) "Native American," the definition of which included Mexican, Colombian and Peruvian DNA as a "stand in." Yes, really.  Science says that she may actually be less Native American than the average white American:

“The researchers found that European-Americans had genomes that were on average 98.6 percent European, .19 percent African, and .18 Native American.”

This very much leaves open the wildly entertaining possibility that Donald Trump is, in fact, more  "Native American" than Elizabeth Warren. But anyway, yes, she's obviously running for president, and she knows that this issue will cause headaches among not only right-leaning voters who already oppose her, but also among progressive voters who might hold certain Identity Politics infractions against her.  Keep in mind that Warren had previously claimed to be part Cherokee, an assertion hotly refuted by real Cherokees, including a young woman writing at a far-left website:

She is not from us. She does not represent us. She is not Cherokee...In defending her supposed Native identity, Warren has drawn from both racist stereotypes and easily refutable stories about her family. At a 2012 press conference Warren stated that her family knew her grandfather was “part” Cherokee because “he had high cheekbones like all of the Indians.” Cherokee genealogists have pored through her family history to find that “None of her direct line ancestors are ever shown to be anything other than white, dating back to long before the Trail of Tears.” To add insult to injury, despite Warren’s public claims of Native American heritage, she has decidedly avoided talking with Native leaders...

Warren seems to have dropped the "Cherokee" piece of her story, apparently hoping that we'll all forget about that chapter of this ongoing embarrassment.  Because identity is a central element of how the modern Left operates, the 'Native American' controversy could be a problem for Warren, and she knows it.  She feels like she has no choice but to tackle the issue head-on, even if her defenses are weak.  And they're exceedingly, risibly weak.  Nobody is going to hold some family whispers against Warren, and it appears clear that at least some members of her family heard and internalized the same rumors. But that doesn't explain Warren's actions.  According to the Boston Globe, Warren listed herself as "white" and a non-minority early in her career, then made a significant shift around a significant date:

The Globe has also obtained a portion of Warren’s 1973 application to Rutgers, where she attended law school. That document specifically asks: “Are you interested in applying for admission under the Program for Minority Group Students?’’ Warren answered “no.’’ In addition, a newly unearthed University of Texas personnel document shows that Warren listed herself as “white’’ when she taught at the law school there from 1981 to 1991. The undated document, obtained by the Globe through a public records request, supports Warren’s statement that she did not present herself as a Native American when hired for the job. But it leaves open the question of why she later listed herself as a minority in a legal directory that is often consulted by hiring deans. Warren’s employment document at the University of Texas allowed her to check multiple boxes specifying “the racial category or categories with which you most closely identify.’’ The options included “American Indian or Alaskan Native,’’ but she chose only white.

The emergence of the University of Texas form does not explain why Warren listed herself as a minority in a widely used Association of American law Schools directory from 1986 through 1995. Warren has said she was proud of her Native American heritage and that she was hoping to connect with “people like me.’’ The directory, however, did not list her as someone with Native American heritage. It simply said “minority.’’ Harvard Law School also touted Warren as a Native American in the Harvard Crimson when it was under fire for a lack of diversity on its faculty. Leonard P. Strickman, founding dean at Florida International University, one of the nation’s most diverse law schools, said deans often consult the Association of American Law Schools directory when seeking out minority applicants, but look more rigorously at scholarship before making hires.

She chose to list herself as a minority in this influential professional publication ("often consulted by hiring deans") in 1986.  She was offered a teaching position Penn, an Ivy League institution, in early 1987.  Imagine that.  She then continued to 'check the box' through 1995, which happened to be the year that she received a tenured position at Harvard Law School.  Warren and her defenders insist that this timing is coincidental and that her formalized self-description as a racial minority played no role in her jump into the Ivies -- even though both Penn and Harvard were under immense pressure to enhance faculty diversity at the time, and each subsequently touted her in literature as a minority.  She has claimed she didn't even know they were celebrating her as a minority, but her story has evolved.  That strains credulity.  It becomes even more dubious when you consider her ludicrous explanation for why she suddenly dropped the "minority" posture after reaching the pinnacle of her career path at Harvard:

Warren's explanation to the Boston Herald was that she listed herself as a minority in the hopes that she would be invited to a luncheon so she could meet "people who are like I am" and she stopped checking the box when that didn't happen. Perhaps it "didn't happen" because at no point, at any of the schools she attended or worked at, is there any evidence that Warren ever joined any Native American organizations on campus or in any way interacted with anyone in the Native American community.

This is insulting. She listed herself as a minority in hopes of getting invited to luncheons -- then, after not even attempting to join any Native American groups -- she de-listed herself the very same year that she attained tenure at Harvard?  And she supposedly did so because no such invitations had arrived over the previous near-decade?  Only the most credulous Warren supporter (several of the professors and administrator defending her have donated to her campaigns) could advance that line with a straight face. But wait, it turns out some invitations did arrive after she arrived at HLS, where she was hailed as a Native American faculty member...and she rejected them:

Dr. Gavin Clarkson, a citizen of the Choctaw Nation who received both a doctorate and a law degree from Harvard while Warren was a professor, says he "personally invited" her three times to visit with Harvard's Native American Law Student Association (NALSA), which he headed while attaining his dual degree. Warren, who had identified as a minority in law professor directories and was touted by Harvard as a Native American hire, never accepted his invites. "I was on campus at Harvard for five years, from 1998 to 2003," Clarkson said. "Warren was identified in the AALS law teacher directory as an American Indian faculty member." "Hi, we're the Native American students on campus and it would be nice to meet the only Native American professor on the faculty," was the message Clarkson was attempting to get across, but he says he was dismissed by Warren every time.

Warren can trot out as many supportive colleagues from her various law schools as she likes (misleadingly, a number of those featured in the video were from universities where she taught before she decided to classify herself as a minority), but this simple fact pattern remains: Several Ivy League schools were beset with faculty diversity crises in the 1980's and 1990's. Warren started checking the minority box just prior to getting hired into the Ivy League, then ceased checking the box just after she got tenure at Harvard, nine years later. Her explanation for this timeline is patently absurd. And the publication in which she self-identified as a minority was known to be a "tip sheet" for administrators looking to hire minority professors. It very much looks like her little gambit worked.  And now she's trying to frame all of this as a nasty attack by Donald Trump.  Relatedly, notice her jab at Fox News in the original tweet.  She's trying to power through this mess with naked appeals to, um, tribal politics.  It's humiliating.  Also, Allahpundit asks a good question.  How does this nonsense interact with the new Left's various identity-driven 'social justice' pieties?

If Warren is Native American because she might have had a single native ancestor hundreds of years ago, various Republican pols who might have remote native or black or Latino or Arab ancestors should logically be able to claim membership in those groups by dint of their own faint genetic link. And if 1/1024th is enough to make Warren Native American, progressives will have to rethink about their views on “cultural appropriation.” If one ancestor 300 years ago is enough to entitle you to “appropriate” a particular culture, there’ll be very few cultures that can’t properly be appropriated by the average white American.

I'll leave you with Barack Obama's 2012 campaign manager venting frustration about the timing of this roll-out:

This isn't much of a riddle, really.  She's a lock for re-election in Massachusetts, and the sooner she can get the media to yawn at her racial fraud controversy as "old news," the better it is for her presidential bid.  So she's trying to shove the story out into the open as early as possible, while daring Democratic voters to side with Trump over her.