Insulting Spin: No, Republicans Aren't 'Bullying' or 'Silencing' Kavanaugh's Accuser By Inviting Her to Testify 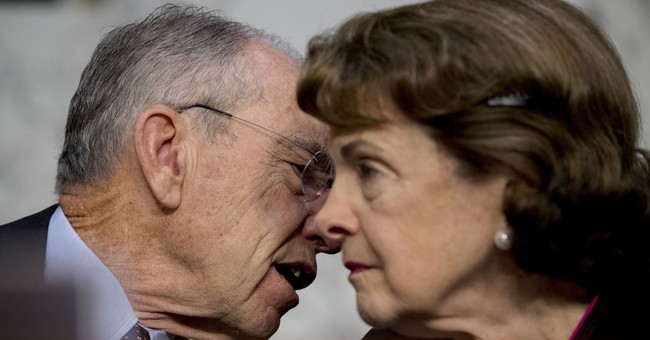 The goalposts shifted -- cynically and immediately -- as soon as Senate Judiciary Committee Republicans did the right thing by offering Brett Kavanaugh's accuser an opportunity to testify before their committee, in the manner in which she'd feel most comfortable.  Rather than ram-rodding the process forward or casting aspersions on the alleged victim, Republicans appear to have frustrated Democrats' messaging by pausing the vote, scheduling a new hearing, and discussing the situation with respect and care.  The timeline and plan Chairman Grassley and company have laid out is reasonable overall (here are a few of my expanded thoughts), yet lefty partisans and biased media sources are engaging in bizarre Orwellian spin, flailing to frame this offer to testify as somehow problematic:

CNN chyron: GOP “pushing” Ford to attend hearing. Didn’t her lawyer say on national television that her client was willing to testify? R’s have offered open or closed session.

That was on Tuesday, literally one day after Prof. Ford's attorney went on national television and vowed that her client was prepared to testify and do "whatever it takes" to get her story into the official record.  That interview came the morning after the Washington Post published a piece in which Ford identified herself and detailed her allegation.  The committee has rightly offered Ford three options: Testify in public, testify in closed session, or share her testimony with the committee from California, her home state.  The latter idea is a fair accommodation that could eliminate any claim that a 'last minute' trip to Washington would be too burdensome on her schedule.  It would also ameliorate security concerns, given the disgraceful threats (check out this side drama) she and her family have endured.  Nevertheless, this is how Democrats are positioning all of this:

Republicans: Where is your humanity and decency? Stop bullying a woman who has already been traumatized. Slow down and do right by the American people. pic.twitter.com/Vf3mBpK9SD

Presenting Ford with multiple scenarios to testify and tell her story under oath is not "silencing" her.  It's the opposite.  Taking the accuser's attorney at her word (that her client was ready and willing to do "whatever it takes" to appear before the committee), and acting accordingly, is not "bullying."  This is preposterous and embarrassing stuff.  It doesn't help that some journalists -- in this case, an Obama administration alum turned reporter -- are butchering the facts to fit Democrats' inaccurate narrative.  Here's a Republican member of the judiciary panel correcting Sciutto's original sloppiness:

This is not close to the offer to #ChristinaBlaseyFord.

Chairman Grassley offered an open or closed hearing, reached out to discuss timing that would work for Dr. Ford, has even offered to send staff to California.

As for the latest talking point about the necessity of an FBI probe, the Bureau has no jurisdiction, no mission to investigate, and has explicitly said they aren't launching an investigation.  Even local authorities looking into the matter would have no alleged crime scene to visit, or even a month in which the attempted assault is said to have taken place, roughly 36 years ago.  We already have public statements from the accused, the accuser, an alleged eyewitness, and another potentially-relevant witness, identified by the accuser.  We have a detailed letter laying out the allegation, and additional context offered by the accuser to the Post.  In other words, we have everything we need in advance of a hearing.  Demands for an "investigation" prior to testimony seem unserious, and look very much like a political delay tactic.  Meanwhile, Sen. Feinstein is absurdly blaming the media for 'outing' Prof. Ford.  Pray tell, Senator, how ever did the media get wind of Ford, her allegations, her identity, and her contact information?

.@SenFeinstein says “the media outed” Judge Kavanaugh’s accuser. But only Democrats & their aides had access to the letter. So what she really means is Democrats leaked the letter. Either @SenFeinstein approved the leak or she can’t control her own committee. Neither good. https://t.co/YE3evvknMV

Who was in possession of Ford’s letter?

Boy it sure is a mystery how it leaked. https://t.co/mlhPsLXh8i

Nobody is buying the notion that Senate Democrats, led by their Judiciary ranking member, have handled this properly.  At best, they've badly botched the timing.  At worst, the timing was deliberately "botched," for maximum political impact.  This exchange on MSNBC illustrates the mess Democrats have -- again -- created for themselves:

I still suspect Ford is going to testify, and probably in public.  It's hard to imagine a woman writing and sending that letter to Democrats, hiring an attorney, scrubbing her social media, taking a polygraph test, and sharing her account with a major newspaper...then not appearing under oath.  But who knows?  Maybe she never really wanted to come forward at all.  Or maybe she and her lawyers are spooked by rumors that Kavanaugh's supporters are in the process of nailing down strong exculpatory evidence:

But three people who have spoke to Whelan and Federalist Society’s Leonard Leo in recent days say they are “100 percent confident” they’ve obtained information that will exonerate Kavanaugh - https://t.co/C6xlnGXOZL

"100 percent confident"?  How?  All the factors we've mentioned -- distant history, no known time or place, hazy details, etc -- cut in both directions, right?  If you're inclined to believe that Team Kav has got the goods, it would have to be some sort of proof that Ford is withholding some key information, or a convincing indication that she's fingered the wrong guy.  If you're inclined to be cynical, and this whole process has bred cynicism, you might wonder if this is a bluff designed to convince Ford not to testify (thus likely securing Kavanaugh's confirmation).  I've gotten to know Ed Whelan and Leonard Leo a little bit, and I'd be surprised if they were leaking and over-promising unethically.  The rest of us will have to stay tuned and find out, I suppose.  Will she testify?  What, if anything, do Kavanaugh's allies have?  Such suspense.