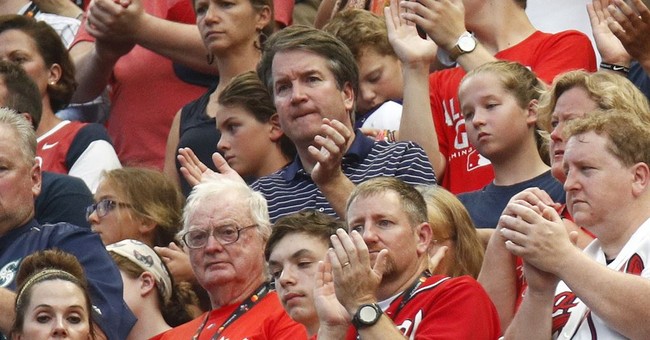 Read on for the baseball-related punchline, but first consider the shambolic state in which the Kavanaugh resistance finds itself a few weeks prior to his scheduled Senate hearings. Two major newspapers reviewed the available evidence, quizzed their sources, and reached nearly identical verdicts over the weekend: The organized Left's opposition to Supreme Court nominee Brett Kavanaugh is flagging, unfocused, and perfunctory -- and even some the activists and partisans who've set out to derail his confirmation are privately conceding that their efforts will likely prove futile.  The Washington Post reports that internecine blame games are already underway, as liberal activists grapple with the realities that are starting to set in.  If you're passionately anti-Kavanaugh, every line of this lede is pretty bleak:

Democrats have all but acknowledged that they are unable to stop the Senate from confirming Trump nominee Brett M. Kavanaugh for the Supreme Court this fall. Moderate Republican senators such as Susan Collins of Maine, the most closely watched GOP swing vote, are sending strong signals that they will back Kavanaugh. Several Democrats facing difficult reelections this year have indicated they are open to voting for the judge. And leaders of the resistance are already delivering post-mortem assessments and blaming fellow Democrats for a looming failure. Barring a major revelation, the Senate is poised to install the 53-year-old Kavanaugh on the high court and take the next step toward fulfilling President Trump’s pledge to remake the Supreme Court — and the wider federal judiciary, potentially for decades.

The piece tracks GOP moderate Sen. Susan Collins' apparent journey toward a 'yes' vote, noting that she's voted to confirm every single SCOTUS pick to make it to a floor vote during her tenure in office, regardless of the president's partisan affiliation. It quotes Chuck Schumer lamenting the difficult dynamics of the fight ("we always maintained it was an uphill fight") and defending his decision not to pressure his caucus by intensely whipping votes against Kavanaugh ("punishment is not how this place works").  And it chronicles the frustration of activists who stew over what they see as Democrats' lack of resolve: Schumer "speaks and acts in contradictions," one complains.  Brian Fallon, a spokesman for Hillary Clinton's failed presidential campaign, also blasts Senate Democrats for determining "out of the gate that this was an unwinnable fight."  Fallon has been reduced to impotent, furious pronouncements on Twitter:

This is such a sham. This nomination process is illegitimate and so will be any Supreme Court with Brett Kavanaugh on it.https://t.co/o4yGsKgv0Z

Fallon still does not seem to be handling Mrs. Clinton's loss very well.  If confirmed, Justice Kavanaugh will join Justice Gorsuch and the other justices to carry out the entirely legitimate work of the US Supreme Court.  The Post story also points out how little power minority Democrats have at their disposal: "The fizzling of the campaign to block Kavanaugh underscores the relative weakness of the Democrats, who had promised their political base a pitched battle...Democrats are likely to watch helplessly as the Senate confirms Trump’s second Supreme Court pick after Justice Neil M. Gorsuch. In addition, Republicans have pushed through 24 circuit court judges, a record number for a president in his first two years in office, and two more are in the queue when the Senate returns next week."  And why do they appear doomed to "helpless" onlooking?  Because of Harry Reid's short-sighted 2013 power grab, assisted by nearly every member of his caucus.  They did this to themselves, a fact that is undoubtedly fueling part of their frustration. Over at the New York Times, it's the same old song:

“The Campaign to Stop Brett Kavanaugh Struggles for Liftoff” https://t.co/cNyaQZVCEP

Members of the hardcore anti-Kavanaugh grassroots dejectedly observe that their "jaded" friends and neighbors aren't willing to join their crusade.  The Times matter-of-factly assesses, "in Washington, Democrats have struggled to score points against Judge Kavanaugh," with "court-focused organizers...struggl[ing] to sustain pressure through the summer doldrums."  Thus far, their only sustained talking point (amid lots of shouting, silliness, and straw-grasping) has been to insist upon the release of even more documents from Kavanaugh's past, against which Republicans are pushing back with context like this:

The Senate Judiciary Committee this weekend released more than 87,000 records from Brett Kavanaugh’s tenure in the George W. Bush White House. To date, more than 103,000 pages of materials from the Supreme Court nominee’s past work have been made public. They are part of a record million-plus pages of legal opinions and emails from his career as a federal judge, White House lawyer and assistant to the prosecutor who investigated President Bill Clinton. The sheer number of documents is at least five times more than the past two nominees to the high court to be confirmed, and Judiciary Committee Chairman Chuck Grassley, R-Iowa, has said it’s more than any high court nominee in history.  Senators reviewed about 182,000 pages of documents on Neil Gorsuch and about 170,000 pages on Elena Kagan. Despite that, Democrats and Republicans still have battled over whether they should have access to more as they consider President Donald Trump’s nominee...Grassley said there's "plenty of time" to review the materials.

Kavanaugh's hearings are slated to start September 4, commencing 57 days after he was selected by President Trump. That's roughly a week longer than the (nearly identical) announcement-to-hearings time frames for Justices Sotomayor, Kagan, and Gorsuch.  As red state GOP challengers continue to use this battle as a pressure point against vulnerable Democrats up for re-election, and as promised, I'll leave you with this (real, non-parody) appeal for the public's help in digging up potential dirt on Kavanaugh by...identifying friends with whom he attended baseball games, or something.  Tweets like this originate from the intersection of desperation and humiliation:

Did you attend a Washington Nationals game in 2017?

You might be able to help us. Really. https://t.co/LAhGBWiI6u pic.twitter.com/Y2Xhkx6ir0