No, Democrats, Brett Kavanaugh Doesn't Believe Presidents Are 'Above the Law' 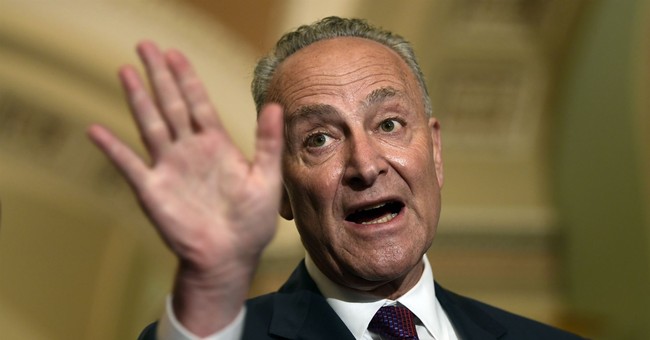 After fumbling about for compelling lines of argument against the nomination of Brett Kavanaugh to the US Supreme Court, the Left is confronting the harsh reality that they have precious little of substance to use against him.  With the pre-hearings cupboard appearing quite bare, the talking point many Democrats have settled on is that Kavanaugh believes sitting presidents are "above the law" and "can't be investigated" while in office.  This is nonsense, designed to whip up their febrile base by implying or outright stating that Kavanaugh would protect Trump by ruling against Bob Mueller.  We've dealt with these claims before, but since they keep getting repeated, they merit additional fact-checking.  Here's the latest iteration of the false attack, advanced by Hillary Clinton's former spokesman:

New @WeDemandJustice ad: Brett Kavanaugh thinks the President should be above the law and would side with Trump in a Watergate-style showdown before the Supreme Court. pic.twitter.com/P5G2Tri5Q6

Kavanaugh -- who worked for on Kenneth Starr's team investigating President Clinton -- has never, ever suggested that the law doesn't apply to presidents.  In fact, he stated precisely the opposite in a scholarly article published in 2009: "No one is above the law in our system of government. I strongly agree with that principle," he wrote.  What he has done is argue that a now-expired independent counsel statute should be abolished, a stance he shared with the likes of Dick Durbin and numerous Congressional Democrats.  On that front, Kavanaugh has applauded a 1988 dissenting opinion written by the late Justice Antonin Scalia, which has been generously praised by liberal Justice Elena Kagan and positively cited by the Clinton Justice Department.  The old law, as written, was eventually seen as a travesty by members of both parties, and was not renewed.  Rather than making that case that presidents shouldn't face scrutiny, Kavanaugh's article sketched out an alternative framework for how future special counsels could be structured.  Trump critic and close friend to James Comey, Benjamin Wittes, explains:

Kavanaugh’s writings on the subject of special counsel investigations did not begin with the 2009 Minnesota Law Review article. In 1998, he published in the Georgetown Law Journal an article he had written after leaving his job with Kenneth Starr’s investigation but before returning to the office to help write what became the Starr Report...This was a period in which a consensus had developed that the old independent counsel statute had to go. Conservatives had always hated it. Liberals had come to hate it. And, in fact, Congress would allow it to lapse in 2000 after everyone from Starr himself to the Justice Department urged its end. Kavanaugh, by contrast, made the then-unpopular case that some independent counsel law remained necessary: “future debates,” he wrote, “should not focus on whether a special counsel statute is necessary, but rather on the more pertinent questions of by whom and under what conditions a special counsel should be appointed.” He went on to sketch out what a healthier independent counsel law might look like—healthier as a matter of constitutional law, as a matter of policy and as a matter of democratic governance...the structure [Kavanaugh] describes looks a great deal like the regulatory structure under which Robert Mueller serves.

Kavanaugh has also written that presidents should not (which is not the same thing as "cannot") face indictments or lawsuits while in office, urging Congress to pass a law to that effect.  That a sitting president can't be indicted is the longstanding opinion of the Justice Department, but Kavanaugh wrote that the people's branch should essentially formalize that view through legislative action (note: not the judicial branch imposing this through judicial action), opining that impeachment is the proper political recourse for gross misconduct.  His argument was not that presidents cannot be investigated and prosecuted; it was that they ought not face the criminal and civil justice system until after they have left, or been removed from, office.  Liberal Harvard Law professor Noah Feldman wrote a devastating column powerfully rebutting Democrats' lazy, dishonest characterization of Kavanaugh's views:

Properly understood, Kavanaugh’s expressed views actually support the opposite conclusion: that the president can be investigated and maybe even indicted unless Congress passes a law saying he can’t — which Congress has not done...From a legal and constitutional perspective, Kavanaugh wasn’t saying that the courts should find that the president shouldn’t be investigated or indicted. To the contrary. He was saying that Congress should pass a law ensuring that result, because without it, the president was open to being investigated — and maybe even indicted. Pause to take that in. If a law by Congress is necessary to fix the problem, it follows that without such a law, it is perfectly permissible under the Constitution to investigate a sitting president, as Starr did. Although Kavanaugh didn’t expressly say that a sitting president may constitutionally be indicted, it is a plausible implication of his article. Otherwise, there would be no pressing need for Congress to pass a law saying that he could not be. The courts could intervene and save the president from indictment. In the 1998 article, Kavanaugh avoided taking a position on whether a sitting president can be indicted, calling it “debatable.” That’s actually a pretty strong pro-indictment view, because many, probably most constitutional scholars think a sitting president can’t be indicted.

Judge Kavanaugh patently does not believe the president is above the law; nor does he believe that the judiciary is empowered to insulate the president from lawsuits, indictments, or investigations. He correctly argues that the Constitution’s main check against presidential law-breaking is Congress’s impeachment power; in addition, he observes that it is for Congress to determine whether the president should receive any protection from civil or criminal proceedings. To maintain our system in which no one, including the president, is above the law, any such protections would involve delaying proceedings during the pendency of the presidency, not granting immunity from them. And to the extent Kavanaugh endorses such delays, it is completely in keeping with current, longstanding policy, which prevents sitting presidents from being indicted and which accommodates delays in countless contexts that involve concerns far less weighty than the chief executive’s responsibilities.

In summary, Kavanaugh very explicitly does not claim that presidents are above the law, he does not believe they shouldn't be investigated, and he does not believe special counsels are unconstitutional or shouldn't exist. He has written that Congress should take steps to shield actively serving presidents from criminal and civil prosecution, using the constitutional prerogative of impeachment as the tool for punishing high crimes or misdemeanors -- thus delaying the adjudication of potential indictments or suits until he or she no longer occupies the office.  He also sharply criticized an over-broad statute of dubious constitutionality, which became such a consensus view that it was ended by both parties.  If this is among the "best" intellectual ammo Kavanaugh opponents can marshal against him, Dan McLaughlin is right: They've got nothing.  I'll leave you with a highlight reel of shrill, knee-jerk resistance reaction to Kavanaugh's nomination (oppose immediately and hysterically, find reasons later), followed by a progress report on the exceptionally effective Trump/McConnell partnership on reshaping the federal bench -- which wouldn't be possible, if not for the short-sighted, power-hungry overreach of Harry Reid:

We looked at every president and their judicial appointments. No president in American history has had more success putting appellate judges on the bench than President Trump at this juncture of his presidency. https://t.co/RyFznJhGpc pic.twitter.com/by4asy11Ea