Unpleasant Questions: Are 'N-Word' Tape Rumors Remotely Credible? If So, Then What? 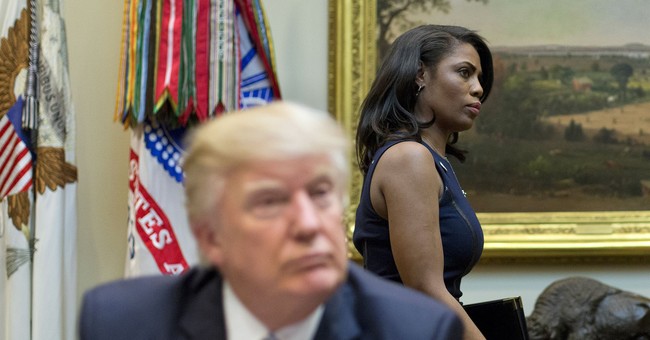 Let's review: During the 2016 presidential campaign, rumors persisted regarding the existence of a tape featuring an Apprentice-era Donald Trump uttering the N-word.  People whispered and speculated about it -- but unlike the infamous Access Hollywood recording, it never emerged.  Perhaps it's completely made up.  It's entirely reasonable to suspect that Trump's critics would shamelessly peddle smeary innuendo to further toxify him on racial matters, a vulnerability that is at least partially of his own making.  Perhaps it truly is out there, but its possessor is committed to keeping it under wraps.  Such political favors, ahem, aren't unheard of.  Or perhaps the renewed focus on this subject will result in the tape's release.  The president has issued a categorical denial, tweeting that he's never used the N-word.  Taken together, are there clues as to whether this is all a product of fact or fiction?  Consider some of the messy and conflicting evidence:

Disgruntled former employee and noted pathological liar Omarosa Manigault Newman now claims that she's personally heard the tape, contradicting previous statements (and her own book). Now that she's in the process of selling that book, she's conveniently advancing all sorts of claims, some bootstrapped from a series of surreptitious recordings she made while working at the White House -- including, disgracefully and outrageously, from inside the Situation Room.  On the credibility scale, she ranks exceptionally low.  She's as conniving, self-serving and dishonorable as they come; indeed, that's her whole brand.  You might point out that this is an indictment of President Trump's decision to hire her as a senior White House adviser, and you'd be right.  But that observation doesn't improve her believability one iota.  For what it's worth, a handful of other Apprentice alums insist either that the tape is real, or that Trump said enough deeply insensitive things as to make its existence plausible.  Actor Tom Arnold says the former; magician Penn Jillette says the latter:

Penn Jillette says Trump said bad things, but won't go into it because he's not sure he'd get all the facts right, which is a genuinely interesting way to look at it. pic.twitter.com/wjj1lKO60q

One of Omarosa's secret recordings features a handful of campaign aides discussing the possibility of an 'N-word' tape leaking, and gaming out how they'd spin it.  Former campaign flack Katrina Pierson, for instance, appears to believe that her boss probably had used the racial slur at some point and was "embarrassed" about it.  (She appeared to deny ever discussing the issue, but then the tape came out).  In the recording, Pierson wonders about the context in which the word was allegedly used, if it was at all.  But campaign officials kicking around potential damage control ideas based on a rumor is hardly proof that the rumor itself was true.  Another major Omarosa contention is that she'd been informed that political pollster Frank Luntz had also heard the supposed 'N-word' tape.  Luntz is angrily denying this, delivering another blow to her credibility:

More pieces of Omarosa's version of events are also being challenged:

Lynne Patton, a former assistant to Eric Trump and now a Department of Housing and Urban Development official [and one of the campaign officials featured on Omarosa's recording mentioned above], pushed back on Manigault Newman's claims.  In a statement, Patton said she got a call from her on the day she was fired, “informing me that she had personally heard a second-hand recording of President Trump using the ‘N-word’ in a derogatory fashion.” In that call, she said, Manigault Newman claimed she voluntarily “submitted her resignation” to Kelly and  recommended that Patton “should promptly do the same before the audio surfaced.”  Manigault Newman claimed this week that the original source of the alleged tape was former “Apprentice” producer Bill Pruitt. But Patton said she spoke to Pruitt, and he has “NEVER had an audio tape” of Trump using the slur.

Omarosa's own Situation Room tape seems to prove that she did not "voluntarily submit her resignation" out of moral disgust; instead, she was fired for "integrity violations." And Ms. Patton strongly disputes the bit about a former Apprentice producer, Bill Pruitt, allegedly being the source of the much-discussed tape (Pruitt had dropped hints and teases to this effect in the past).  According to her, Pruitt now says he never had it at all.  All of these strands of information -- plus the fact that is has never leaked, in spite of Trump's long list of detractors and enemies -- add up to fairly strong circumstantial case that the N-word tape is an ugly legend.  Is it conceivable that it's real, though?  Unfortunately yes, which presumably is why the White House Press Secretary refused to 'guarantee' that it's not.  That answer touched off even more spectulative debate.  For the sake of this discussion, let's pretend that the tape exists and it makes its way into the public sphere (again, I'm dubious that this is the case).  Then what?  This cynical statement caught my attention earlier in the week:

I think deep down we know an n-word tape wouldn't move Trump's numbers one way or the other.

Others seem to agree:

I don't want the tape to exist for two reasons:

1) I don't want the POTUS to have used that language; and

2) I don't want to see what further depravity that tape would reveal on the right-as once again all too many of his defenders would rally to defend the indefensible.

The Weekly Standard's John McCormack points out that many Republican voters were willing to shrug off the audio recording of Trump bragging about grabbing women's genitals against their will as mere "locker room talk," later dismissing numerous corresponding allegations from multiple women as lies.  In light of that episode, wouldn't Trump's defenders once again do and say virtually anything to defend, downplay, and counter-attack?  Some certainly would, but my guess is that actual proof of the president using the N-word would break through and have an impact.  It may not shake the confidence of Trump's hardcore fan base, but it would likely hurt his standing in other ways:

(1) A number of polls show Trump's job approval rating on the rise among African-American voters.  If those voters literally hear him employing the worst anti-black slur imaginable, simultaneously proving that he lied about it, any burgeoning good will among that demographic would almost certainly vanish.  (2) Even more independents, whose views of Trump are relatively dim overall, but not catastrophically bad, would abandon the president.  Maybe I'm naive, but I still believe that even in our present, norm-eroding political environment, certain cultural red lines do exist.  And solid evidence of the President of the United States using the N-word -- in a clearly derogatory context, as an adult -- is one of them. (3) For that same reason, some critical mass of Trump-skeptical conservatives, including some who've warmed to him ahead of 2020, would once again walk away.  Consider these sentiments from Ben Shapiro, who just last week told me why he's grown increasingly inclined to support Trump's re-election -- and who made the case that a primary challenge of Trump was an unwise idea:

There comes a point when the downside of a primary run (namely, the massive backlash against conservatives that would follow) is dramatically outweighed by the downside of another Trump top-of-the-ticket run. An n-word tape would shift that math.

(4) A significant number of Republican lawmakers would strongly (and rightly) condemn Trump, re-opening a schism within the party.  Trump loyalists would be furious at those who "pile on" over their "disloyalty," brewing deep resentment among Trump-averse conservatives.

None of this is to say that the combination of these four factors would push Trump out of office, or would necessarily even depress his approval numbers into the 20s or teens.  But they would represent politically-damaging consequences that, in my view, would significantly hamper Trump's chances of winning a second term.  For the third time, I'll stipulate that I do not believe the tape exists. And for the reasons articulated by David French in his tweet above, I sincerely hope that it does not.  I don't want Trump to have said it, I don't want Trump to have lied about saying it, and I don't want Jonathan V. Last to be right about the resulting fallout:

Do you think he’d lose support from his base? Do you think he’d pay a price for lying about the tape’s existence? Or for using the N-word? I do not. Everything we know about the president's base supporters suggests that there is no straw that will break the camel's back—only goalposts, receding constantly to the horizon. And if the last two years are any guide...then Trump is already resting on his [public opinion] foundation...Let’s pretend that Trump could hollow out, that an N-word tape would finally be the straw that breaks the camel’s back. Let’s pretend that Trump’s approval collapsed among Republicans. What then? He’s not going to resign. He’s not going to be impeached and removed from office. The #Resistance fantasy is that some deus ex machina will make Trump disappear. This is not going to happen. The only way Trump leaves is if he loses re-election in 2020. For both good and ill, President Trump is our reality and he will continue to affect the world around him...If you look at the Trump administration and think it can’t get worse, then you haven’t contemplated what a scorched-earth Trump might be like.

For all sorts of reasons, let's hope Omarosa is completely full of it on this, as she seems to be on any number of matters -- and that her appalling say-anything, self-promotional sideshow proves to be a fleeting media fascination that quickly fades from the spotlight.

Parting throught, via Allahpundit: This situation feels like a prime opportunity to unleash the disorienting chaos of "DeepFakes," doesn't it?