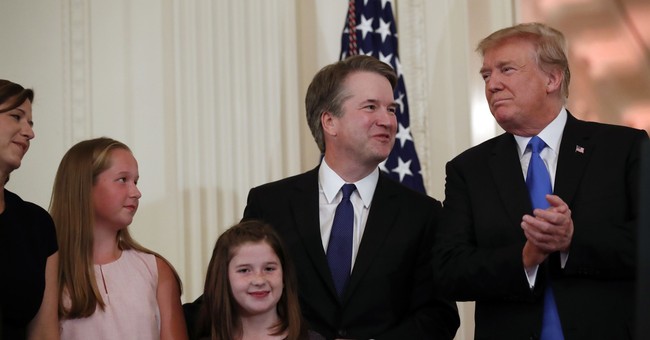 As our reporting suggested, President Trump announced his nomination of Judge Brett Kavanaugh to the United States Supreme Court Monday night, following a process of extraordinarily leak-free secrecy.  Kavanaugh has been a member of the powerful DC Circuit Court of Appeals since 2006, to which he was appointed by President George W. Bush.  His record on the bench would be even more substantial, in fact, if not for a lengthy Democratic filibuster (part of this relevant history of confirmation escalations) against his nomination.  After a deal was finally reached, Kavanaugh (now 53 years old) was at last confirmed with 57 assenting votes, having waited roughly three years for a vote.  He has long sat near the top of many conservatives' potential Supreme Court vacancy rosters, including -- crucially -- President Trump's.  Kavanaugh has been a highly influential and respected (and conservative) judge for a dozen years, and now he's on the brink of joining the Supreme Court, to which he has sent a consistent stream of clerks.

The judge is beginning his rounds on Capitol Hill today, shepherded by the Vice President.  Moving forward, his Hill sherpa will be former Arizona Senator Jon Kyl.  While various center-right factions were pulling for different candidates among Trump's 'final four,' the announcement of Kavanaugh as the pick was met with fairly robust praise among most conservatives:

Kavanaugh nomination shows Trump Administration is serious about taming the administrative state. His opinions on AdLaw issues already get SCOTUS attention. Now he'll be at the table.

Even many of the less-than-exuberant seemed satisfied:

This. Trump made the best safe pick he could make. This is a no-risk nomination (barring something unforeseen.) https://t.co/Hls2Ty4iP7

He may not necessarily have been my first choice, but he's more than acceptable. I'd like to highlight and address a number of criticisms of Kavanaugh, from both the Left and Right.  (1) Some Trumpist conservatives aren't happy about the nominee's deep connections to the Bush administration -- a drawback that reportedly gave Trump pause, too.  But this is silly for reasons that Allahpundit lays out:

The Bush criticism strikes me as particularly stupid. Bushes 41 and 43 controlled the party for the better part of 20 years; if you were an ambitious conservative legal up-and-comer, naturally you’d make nice with them and go to work for them. Not only were they the only conservative game in town, they were the only Republican game in town. Who was Kavanaugh supposed to align with circa 2003, when Trump was still more than a decade away from politics? Pat Buchanan? He’s been a conservative judicial star at the appellate level for more than 10 years.

Exactly. That part of his CV shouldn't be held against him at all, especially by Republicans.  Mitch McConnell had reportedly raised concerns about the sheer extent of paper trail that could bog down the Senate process, but I think most Souter-paranoid conservatives would much rather have too much paper trail than too little.  And hey, the Senate was already going to be working through August anyway, so there will be time to pore over the documents.  In fact, one can't help but wonder if wiley Mitch McConnell may have had an inkling about a SCOTUS vacancy when he made that decision.  (2) Is Kavanaugh insufficiently conservative?  Writing at National Review, one of the foremost guard dogs of originalism, Ed Whelan, has beaten back some of these claims.  On my radio program, Whelan called Kavanaugh (and the other shortlisters) "outstanding," and nobody I've spoken with -- including passionate advocates of other potential selections -- has remotely suggested that Kavanaugh would be anything other than a substantial ideological upgrade from Justice Kennedy.  Going a step further, Sean Trende at RCP thinks Kavanaugh could emerge as a leading conservative thinker on the Court:

Since Scalia’s death...conservatives have been without an intellectual leader. Kennedy certainly would not fill that role. The chief justice might have, had he been named an associate justice as was originally planned, but he is nevertheless chief justice. Gorsuch and Thomas are likely too idiosyncratic; they are more in the vein of William Douglas than William Brennan...Judge Kavanaugh, however, could fill this role. His conservative credentials are nearly impeccable, and those concerned about his dissent in the Obamacare cases should remember Scalia joining Brennan’s opinion striking down flag-burning statutes. Additionally, he is, quite simply, one of the most brilliant individuals I have ever encountered. He is also a truly gifted writer. At Kirkland, we were instructed to make our briefs “sing”; his first drafts were legendary for already being full operas, and that was before he turned to the task of rewriting them dozens of times. Kavanaugh would arrive to the court well-respected by the other justices, as most of them have hired his clerks (which is unusual in this day and age). I suspect that in two decades, constitutional law nerds would speak of the Kagan-Kavanaugh clashes with the same reverence my generation holds for the Brennan-Scalia battles.

(3) Liberals -- beyond the usual criticisms -- have been accusing Kavanaugh of undue deference to the executive, including on the issue of presidential immunity while in office.  Democrats will certainly pursue this line of criticism and questioning during the hearings, but there may be less to it than meets the eye.  Here's why:

It is that Congress should legislate this immunity. The inference is clear: the Constitution apparently does not provide it. Kavanaugh says (as @washingtonpost quotes him) that Clinton v. Jones “may well have been entirely correct.” 3/

The theory implies that Kavanaugh said that *the courts* should protect a president from such situations. But in fact, it's clear that Kavanaugh says that only *Congress* has the authority to do so. See the excerpts below. /2 pic.twitter.com/KEMzfhKUY1

Meanwhile, the unhinged hyperbole is already flowing, as is typical media framing (the ABC News tweet was sent before the nominee was even identified, and the "she" flub is hilarious, and indicative of fill-in-the-blank outrage):

Jim Dean, Democracy for America: Kavanaugh will "directly lead to the deaths of countless women" https://t.co/7qGkSCKEXd

Questions remain: Will Kavanaugh hold Senate Republicans together (and could Rand Paul be as much of a potential obstacle as Susan Collins or Lisa Murkowski)?  Will he peel off any red state Democrats?  Will his massive trove of documents over years of service trip him up?  My initial suspicions are, in order: That barring a major meltdown, Kavanaugh will ultimately attract universal GOP support, will win over a handful of Democrats, and will endure a tough grilling, but survive.  We'll know whether those hunches are accurate soon enough, with the projected confirmation process expected to last into the fall.  But if confirmed, a longer-term question is whether Kavanaugh will emerge as a Scalia-type justice, or will be more in the mold of John Roberts.  He may not prove to be the grand slam pick that Gorsuch was, but he appears solid nonetheless.  And he's no Souter.  I'll leave you with Judge Kavanaugh's introductory remarks, a central theme of which was unavoidable and unmistakable -- I love, respect, and surround myself with strong women:

One more stray thought: I've heard the commentary that Amy Barrett is being "held for the Ginsburg vacancy."  This may well be the prevailing idea, but I think it's a bit ridiculous to bank on it on any level.  We have no idea if there will even be a 'Ginsburg vacancy' during a Trump or GOP presidency.  And even if there is, we don't know what the Senate will look like when it opens up.  If the political conditions are more favorable for Republicans than they are today, Barrett (currently just 46 and perhaps in need of additional seasoning on the federal bench) could be a strong future choice.  But other scenarios may demand a different calculation, like a less overtly conservative jurist -- in which case someone like a Hardiman or Joan Larsen may re-enter the fray.  The point is, gaming up hypothetical scenarios well into the future is a fool's errand.

UPDATE - Via JCN and ConfirmKavanaugh.com, this was ready to go immediately: