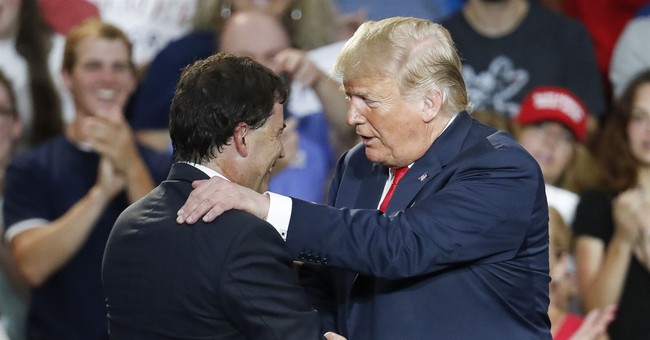 In one of the final electoral salvos before voters across the country go to the polls in November, the people of Ohio's 12th Congressional District are deciding today who will replace retired GOP Congressman Pat Tiberi.  The suburban district Columbus is decidedly red-tinted; President Trump carried it by double digits in 2016, and the seat has been in Republican hands for nearly four decades.  But it does have an independent streak, too, as it voted relatively narrowly for Barack Obama in 2008.  With optics, fundraising, and morale factors at stake, both sides have showered this contest with resources.  Trump has weighed in heavily down the home stretch, seeking to help pull his party's nominee, State Senator Troy Balderson, over the top:

Here's the president predicting a Balderson victory at a campaign-style rally over the weekend.  "They're talking about this 'blue wave.' I don't think so:"

Ohio Gov. John Kasich and President Trump rarely agree on much, but they've both decided to back the GOP's Troy Balderson in his pivotal House special election bid.  Trump endorsed Balderson last week over Twitter, while Kasich announced he'll back the GOP candidate in a statement Thursday morning.  In his endorsement, the governor called for voters in the Republican-leaning district to vote for "common-sense, pragmatic conservative representation" like they have in the past. Kasich represented a portion of the district during his stint in Congress, but the district's lines have slightly changed since then.  "Troy was a partner in turning around Ohio as we passed tax cuts and balanced the budget," Kasich said..."I will be voting for Troy and am proud to endorse him.”  Kasich's endorsement gives Balderson a united front in a state that's seen its Republican Party fiercely divided...Republicans hope that the signal from Kasich, who remains popular among moderate Republicans, will help the party hold the seat in the Aug. 7 special election. Democrat Danny O'Connor has explicitly targeted Kasich voters during his campaign...

A recent poll gave the GOP candidate the thinnest of leads -- just one point -- over O'Connor, who's positioned himself as a moderate. He's conceded, however, he'd back Pelosi for Speaker if push came to shove, and decried the national debt while dancing around specific questions about single-payer healthcare...and opposing all entitlement reform.  The public opinion survey showed that the district's voters prefer a Republican Congress overall, but O'Connor has built a substantial lead among independents. The GOP has dubbed O'Connor "dishonesty Danny," pointing to a number of instances of resume inflations, as well as highlighting his Pelosi-line positions on several key issues.  Balderson is running on his record, exemplified by this 'achievement'-style TV spot airing over the final days of the campaign:

While Trump talks about immigration and guns -- on which he and the nominee align -- in a base play, Balderson is reaching out to moderates with messages like this. His approach mirrors that House Republican leaders, who are pushing a narrative of meaningful accomplishment that renders voters and the country 'better off now:'

I'll leave you with a few more notes about the race's dynamics ahead of tonight's outcome, starting with this analysis from RCP's Sean Trende: "The heavily Republican 12th and its predecessors have sent Republicans to Congress in every election dating back to 1980 (and 1936 before that). But the weakness of the modern Republican Party among college-educated whites will hit hard here, and we could see an upset that presages a wipeout in November...If Balderson loses it will be difficult to spin this as anything other than bad news for the GOP. Yes, most races will feature incumbents, but there are a raft of open seats in similarly suburban areas that are more Democratic than the 12th," he warns.  And here's a final note about not jumping to conclusions too quickly based on early vote tallies, which will likely favor the Democrat:

Warning (which I will repeat on Tuesday): O'Connor could win the early vote in OH-12 by like 30 points. Don't overreact