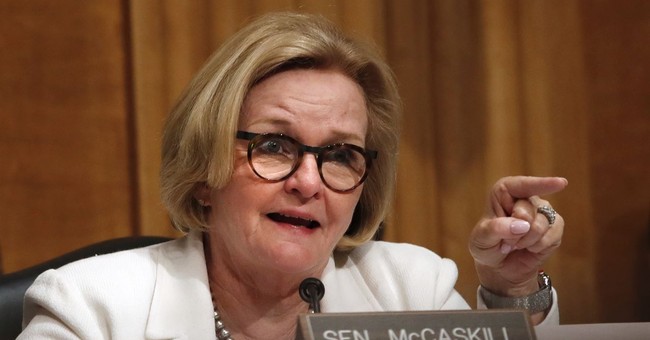 Sometimes, you get to hand select your loose canon opponent in order to cling to power.  And sometimes, you don't.  In Missouri, Claire McCaskill is facing a more formidable challenger this year, and her out-of-touch liberalism may finally be catching up to her.  According to a new poll, the Democratic incumbent is trailing state Attorney General Josh Hawley by two points -- a survey taken just before the Hawley campaign and conservatives started ramping up attacks over McCaskill's record on judicial nominations:

Claire McCaskill did, in fact, vote for 100% of Obama's judicial nominees.

Only Politifact could identify a statement, demonstrate that it's completely true, note that the opposition doesn't dispute it, then rate it as merely "mostly" true anyway.  We asked Hawley about that absurdity, and a host of other subjects related to his race on Benson & Harf last night. Among other things, he called his opponent a "world-class phony."  If we'd had more time, I may have asked for his reaction to a new ad running against Claire McCaskill in Missouri, highlighting her ongoing problems with private planes:

Meanwhile, in Nevada -- where Democrats have a decent shot at knocking off an incumbent Republican Senator -- the GOP scored an oppo research coup against the challenger.  It turns out that some core claims she's been making about her personal and professional biography aren't true.  And yes, the very brief Obama cameo in this new commercial is pretty spectacular:

Turn the volume up on this one pic.twitter.com/AV6rLLk0Ma

And in West Virginia, Joe Manchin is already making positive noises about Brett Kavanaugh, leading some analysts to believe that despite immense sound and fury, the Supreme Court nominee is likely to be confirmed with relatively little drama.  Manchin's opponent, Patrick Morrisey, is circulating a petition demanding that the incumbent support Kavanaugh, with Republicans passing around this editorial from a local newspaper:

In a press release, Manchin singled out just one issue, how Kavanaugh might vote in Obamacare-related cases. The court “will ultimately decide if nearly 800,000 West Virginians with pre-existing conditions will lose their healthcare,” the senator explained. Health care is important. No question about that. But defending the Constitution — that is, ensuring what the legislative and executive branches of government do is in accordance with the critical safeguard of our liberties — is vital. For decades, some appeals court judges and justices ignored their responsibility to the Constitution. They prefered to engage in social engineering, deciding the Constitution meant what they desired. It does not. If a substantial majority of Americans decide the Constitution should be amended, that can be done. The nation’s founders were right to insist that such decisions be made by the people. Kavanaugh has said that if confirmed to the Supreme Court, his allegiance will be to the Constitution as it is written, not to his personal preferences. That is precisely what the nation needs.  That, not how Kavanaugh may rule on any single issue, ought to be Manchin’s concern. And if he determines the nominee will be an impartial arbiter, Manchin should vote for confirmation.

I'll leave you with this statistical analysis from the Weekly Standard's data guru, who says that the evidence right now suggests that Republicans have a fairly strong chance to retain their Senate majority in November:

ICYMI Republicans have a 75% chance of holding the senate according to SwingSeat, the TWS Senate Forecast. https://t.co/SIJ1wlR5tA