Here We Go: Amid High Stakes and Swirling Rumors, Who Will the President Nominate for SCOTUS Tonight? 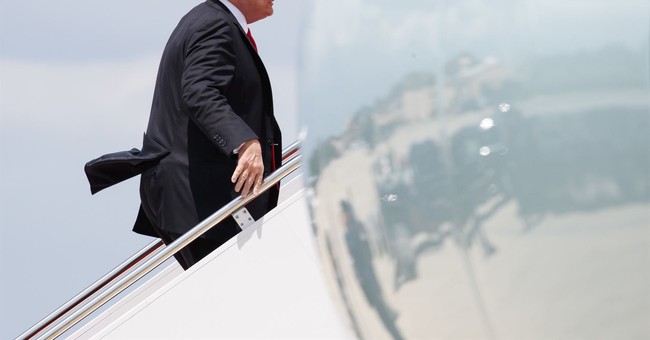 UPDATE (5:20pm ET) - Several signs are pointing to Kavanaugh.  Either it's him, or this is an extraordinary bit of misdirection.  The breadcrumbs from my source are related to members of Team Kavanaugh abruptly leaving law firms this afternoon.  The source says he's been told "from the inside" that Kavanaugh is the pick.  The second tweet, however, could be even more telling:

Buzz at the US courthouse in DC: Brett Kavanaugh spotted leaving in a black sedan accompanied by four black SUVs with security agents presumed to be Secret Service, per source.

UPDATE (3:30pm ET) - Three sources tell me the president's pick will not be Raymond Kethledge. One of them also says Amy Barrett is likely out, but that's less solid.  Taken together, these indications suggest that the Times' reporting about Kavanaugh or Hardiman from this morning was accurate, but we won't know for certain until this evening.  But the decision has been made. Here's what I know, followed by an intriguing piece of chatter that suggests that Barrett isn't out after all.  And another that it could be Hardiman:

FYI - current talk from LawyerSmack people is that Barrett's on a plane to DC with her family right now. #ScotusPick

WSJ: Allies of Judge Thomas Hardiman say they have been told to be ready to begin promoting him

Or are they flooding the zone to crowd out that it's Kavanaugh?  High drama. (Is the Barrett rumor bunk?)

UPDATE (noon ET) - The president's final decision remains a total mystery, and may not have even been determined yet, with nine hours to go until the announcement.  I asked one of my best sources whether the pick is in.  The response?  "Honestly, I don't know."  The New York Times reports that as of this morning, Trump's calls were focused on reactions to Kavanaugh and Hardiman.  If that's true, and I'm not sure that it is, Hardiman is the bigger ideological risk. He may turn out to be relatively solid, but he's generated precious little enthusiasm among conservatives.  Of the finalists, he's at the bottom of nearly every conservative source's list I've spoken to.  For now, I'll leave you with Allahpundit's guess that Trump will go with Barrett.  Developing...

ORIGINAL POST - On Thursday, one of my most reliable sources filled me in on the latest internal ups-and-downs of the SCOTUS selection process, concluding with a pointed reminder: No matter how the tea leaves may look on Thursday or Friday, we were still "light years" away from President Trump making his final decision.  Of the reported final three (Judge Thomas Hardiman, the runner-up to Gorsuch last time, is apparently in the mix as a fourth), each has been rumored to be the frontrunner at various points along the speculation path.  Judge Amy Barrett was seen as perhaps the leading candidate for days, eliciting extraordinary threats and smears from the Left.  But then her interview with the president supposedly didn't go terribly well, and her stock fell.  Since then, she hasn't cracked the top two, according to the scuttlebutt from the plugged-in crowd -- with more people starting to embrace the (silly, in my view) "save a female pick for the next vacancy" mindset.  I was assured late last week that Barrett remained a very serious option and should not be ruled out, and I still suspect she's a strong dark horse.

Nevertheless, all the smart money seems to have shifted to either Brett Kavanaugh or Raymond Kethledge, both circuit court judges with more than a decade of service on the federal bench.  Buzz around the latter federal judge, confirmed to the Sixth Circuit in 2008, rocketed upward after Trump was said to have enjoyed their interview immensely.  As Kethledge appeared to be the leading contender heading into the decisive weekend, a burst or reports that Kavanaugh was, in fact, the strong favorite emerged -- a development confirmed to me by an another solid source, who also cautioned that pre-weekend whispers were by no means the final word.  As Monday dawns and Washington prepares for tonight's primetime reveal, some signs are pointing to the see-saw tipping back in Kethledge's favor.  Here is a Time account published late last night hinting that Kethledge has the inside track, even with all the requisite caveats:

My reporting says it’s unlikely to be Kavanaugh at this point. President Trump simply can’t reconcile his work for President Bush. https://t.co/96e7VbfAsm

As of Saturday evening, advisers say, the president had narrowed his list down to four candidates. Raymond Kethledge was the leading contender, although officials stress that Trump has not yet settled on a choice. Trump has been describing Kethledge to aides as “Gorsuch 2.0,” a reference to his 2017 successful nominee, Neil Gorsuch. Trump sees that nomination as one of the high points of his presidency. Even so, White House officials are preparing rollout plans for all four contenders, which also include Amy Coney Barrett, Brett Kavanaugh and Thomas Hardiman, officials say. Hardiman, however, remains in distant last place. Kavanaugh had been considered a frontrunner, but his fortunes may be torpedoed by Trump’s grudges. Kavanaugh was a top aide to President George W. Bush, whom Trump loathes...White House Counsel Don McGahn, a Kavanaugh booster, has largely stopped making the case for his friend, sources say. Kethledge’s reputation as a writer has intrigued Trump, according to an official briefed on the closed-door sessions with the President. Kethledge’s rulings and his book on leadership have been passed around the West Wing and now Bedminster.

The piece goes on to say that the decision is stil seen as a "jump ball" and that the president is "focused on picking someone that will energize his base, win confirmation and be a consistent and conservative voice for decades."  On the second piece of that equation, Senate Majority Leader Mitch McConnell has reportedly been working quietly behind the scenes to steer the White House toward the two nominees he views as the most easily confirmable:

Senator Mitch McConnell, the Republican leader, told President Trump this past week that Judges Raymond M. Kethledge and Thomas M. Hardiman presented the fewest obvious obstacles to being confirmed to replace Justice Anthony M. Kennedy on the Supreme Court...While careful not to directly make the case for any would-be justice, Mr. McConnell made clear in multiple phone calls with Mr. Trump and the White House counsel, Donald F. McGahn II, that the lengthy paper trail of another top contender, Judge Brett M. Kavanaugh, would pose difficulties for his confirmation. Mr. McConnell is concerned about the volume of the documents that Judge Kavanaugh has created in his 12 years on the United States Court of Appeals for the District of Columbia Circuit, as well as in his roles as White House staff secretary under President George W. Bush and assistant to Kenneth W. Starr, the independent counsel who investigated President Bill Clinton. The number of pages is said to run into the millions, which Mr. McConnell fears could hand Senate Democrats an opportunity to delay the confirmation vote until after the new session of the court begins in October...

Could McConnell's concerns about the 'DC baggage' factor, plus Trump's aversion to Bush-era figures be enough to sink Kavanaugh? Could reported hestitancies from Ted Cruz and Rand Paul also factor in? On the flip side, a long list of conservative influencers, including a number of strong Trump supporters, have circulated columns and talking points enthusiastically endorsing Kavanaugh. Kethledge has his own group of vocal conservative backers, and Trump seems to be a fan, but other members of the movement I've spoken with privately worry that he's too much of a wildcard, and wouldn't energize the base.  A few insights from the how the various camps were angling and battling throughout Sunday, with a deadline fast approaching:

...according to this line of thinking (from 3 different sources), why not hold Kethledge/Hardiman as “bear market” picks — eg if there’s a Dem Senate, or as a hypothetical replacement for a liberal justice. Intense lobbying afoot from various camps...

People in the Kethledge camp rejected those concerns as totally unfounded, with one former clerk relaying the story of Kethledge forcefully endorsing Neil Gorsuch for SCOTUS in a private meeting with Vice President Pence last year.  Another voice:

Meanwhile, Barrett still has some vocal supporters inside the White House and Trump's inner circle -- including Kellyanne Conway and Rudy Giuliani, from what I've heard.  Even those who were pushing for other candidates have conceded that she's a strong talent and that it would be absurd to rule her out, even as of last evening.  After all, she is a young woman who would fire up grassroots conservatives (as would Democratic attacks against her); plus, she was confirmed with 55 votes just last year.  I've come to consider much of the 'horse race' jockeying to be unreliable.  So-and-so is "out," but wait, now they're a top frontrunner -- oh actually, POTUS is suddenly worried about this issue, etc.  It's all noise, much of it driven by self-interested parties with a dog in the fight.  Bigger picture, it's important to recall that Trump's official list was widely applauded by conservatives for good reason, and that even the "worst" choice (however people want to define that) among the finalist would represent a substantial enhancement in terms of the balance of the Court:

...however, one point of universal agreement: ANY of the ‘final four’ would be a clear ideological upgrade from Kennedy. The potential shades of gray range from Roberts-plus to Scalia. #scotus

Stalwart conservative court-watcher and expert Ed Whelan joined our radio show late last week and reinforced this point. Speaking of the big three, he said, "each is more than acceptable. Each is outstanding. Each should unify Conservative support."  Perspective.  By now, the president's decision has almost certainly been finalized (or maybe not, see update).  We'll continue following all related developments as closely as possible, bringing you updates and analysis along the way.  This is one of the most dramatic, high-stakes cliffhangers that exist in modern American politics, so stay tuned...