Final Weekend: Is This Man the New SCOTUS Frontrunner? UPDATE: Or Not? 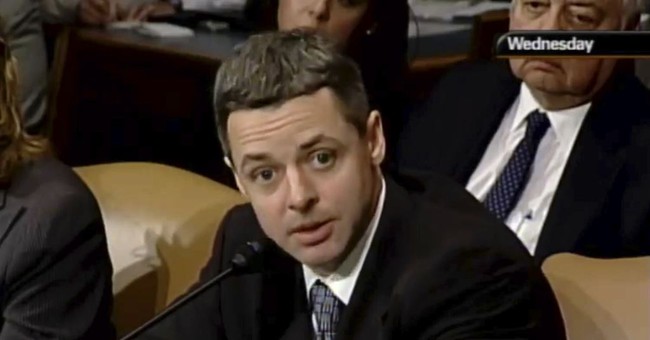 What would normally be a relatively sleepy summer weekend in DC will instead be rife with intense speculation over President Trump's forthcoming announcement of his nominee to replace retiring Justice Anthony Kennedy on the US Supreme Court.  Trump is set to unveil his selection on Monday evening, reportedly during prime time.  If the process remains as shrouded in leak-free secrecy as it was last time, we may not officially know the candidate's identity until shortly before the official roll-out, even if rumors start to percolate a bit earlier.  At the beginning of the week, the scuttlebutt was that Trump's top two finalists were federal judges Brett Kavanaugh and Amy Barrett, with the Left ramping up particularly heated attacks on the latter jurist.  But as we relayed yesterday, once the president started to undertake the interview process, things may have shifted around.

Kavanaugh -- endorsed here by respected conservative Court-watchers -- remains a top favorite (see update) for the job (here's Ed Whelan defending Kavanaugh against a major perceived knock on him, regarding an Obamacare decision).  But coming on strong is Raymond Kethledge, a 51-year-old member of the Sixth Circuit Court of Appeals.  His fans say he's a spitting image of Justice Gorsuch: A committed textualist and an exceptionally gifted legal writer, plus he boasts a charm factor and personal background that could pierce and frustrate Democratic opposition.  From Hugh Hewitt's endorsement:

In these and many more cases, Kethledge has been faithful for more than a decade to the originalist approach. White House staffers will have read every word of Kethledge’s many writings, and they will conclude: Gorsuch 2.0, especially with regards to a willingness to challenge so-called Chevron deference toward the vast administrative state, a doctrine dangerous in its corrosive effect on self-government...Crucially, how will the judge do under the heat of the lights and the often absurd questions and histrionics of the hearings? We won’t know until they get there, but those who know Kethledge assure me it would be a replay of Gorsuch’s commanding performance: knowledge mixed with grace and humor. In other words, a nightmare for the Democrats. Don’t make the easy ones hard, Mr. President. Pick a staunch originalist from the heartland that elected you. Nominate Raymond Kethledge.

Is Kethledge an "easy" pick?  Allahpundit reviews the available evidence, and thinks so:

Kethledge doesn’t have the Harvard/Yale pedigree that POTUS is reportedly seeking but then neither does any other shortlister with the notable exception of Kavanaugh. He is, however, a former Kennedy clerk, just as Gorsuch was; in the legal world, Supreme Court clerkships are the ultimate credential for a young legal talent, much more so than a Harvard or Yale diploma is. Kethledge also has a Rust Belt background as a Michigan grad and current member of the Sixth Circuit. He’s a hunter and fisherman too, another cultural departure from the “coastal elites” who typically dominate the Court. If Trump wants to pay back the people who elected him in 2016, putting a midwesterner on the highest bench is one way to do it.

Could Kethledge's state-level roots put pressure on Debbie Stabenow, who was one of only a handful of Democrats to vote in favor of Michigander Joan Larsen's nomination to the 6th Circuit last year?  Could his background sportsman help woo the Jon Tester's and Heidi Heitkamp's of the Senate?  Perhaps, perhaps not.  But every little factor can make a difference in our polarized era, and in a very closely-divided Senate.  On that score, another potential feather in Kethledge's cap is his reputed charm and winsomeness -- noted by Hewitt --which could grease his confirmation prospects and mitigate hardcore opposition.  At least one person who has reportedly been charmed is the president, whom aides are describing as very impressed with Kethledge, of whom Trump has spoken in very warm terms ever since their meeting.  That's what reporters at both Politico and Bloomberg are hearing.  Intriguing.  As for a critique from some on the Right that Kethledge is 'weak' on immigration, a former clerk has defended his old boss at National Review, arguing that the decisions in question illustrate Kethledge's commitment to textualism.

Meanwhile, where is Amy Barrett in all of this?  Has Trump cooled on the idea of picking a woman? Some commentators are suggesting holding off on a potential female nominee to fill a hypothetical Ginsburg vacancy, for what it's worth.  Do whispers of an underwhelming presidential interview mean that she's knocked herself out of the game?  I spoke to two plugged-sources within the last 24 hours, and can pass along the following impressions.  As you read these points, bear in mind that I've had some pretty strong sources on these issues over the last two years:

(1) One person close to the Trump administration's SCOTUS nomination process says that rumors leaking out that Kethledge has jumped up into the top two (along with Kavanaugh, who remains in a strong position), and that Barrett has slid down a little are correct.  The source stresses that this reflects the president's current thinking, which could very well change over the weekend, when top advisers will huddle and finalize a plan.  The status quo on Thursday or Friday of this week is "light years" away from whatever will transpire on Monday at 9pm ET, I'm told.  Is that true?  Or is Kavanaugh the guy?

(2) The same source cautioned strongly against the notion that Barrett is cooked: "Anyone who's saying that she's out of it are just wrong."

(3) Finally, an observation on Kethledge, part of which I touched on above, from a separate source:

Parting thoughts, as we all read tea leaves and smoke signals while contemplating the president's enormous decision heading into the weekend: If Kethledge is as solid constitutionally as the other contenders, but faces the path of least resistance for confirmation, is that calculus alone reason enough for to give him the nod?  I'll leave you with a spirited defense of Kavanaugh from Matt Schlapp, whose wife is a top communications aide at the White House.  Are the wagons starting to circle around Kavanaugh?  And if it's going to be him, how might conservative skeptics like Ted Cruz and Rand Paul react?

One of my best #SCOTUS sources tells me that heading into the weekend, KAVANAUGH is the “strongest contender,” but adds POTUS still has some Q’s & it’d be an overreaction to rule out the other top 3 (Kethledge, Barrett, Hardiman) at this stage.