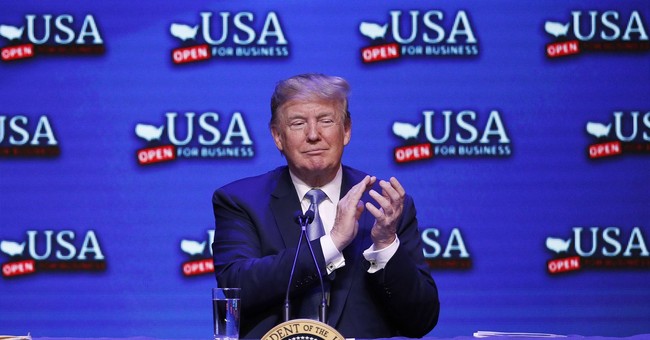 A quick addendum to this morning's post, which mostly quoted from fresh CBS News polling.  CNBC has now released its own national survey, the results of which will be welcome news at the White House.  The American people are increasingly pleased with what they're seeing out of the US economy, are satisfied with the president's handling of the issue, are awarding him more credit for recent gains than Congress or his predecessor, and are now less critical of his overall job performance.  There's a reason why the RNC is eagerly sharing these outcomes on social media:

For the first time since President Donald Trump took office, the CNBC All-America Economic Survey shows more than half the public approving his handling of the economy, and it appears to be having some impact on his overall job approval rating. The president’s economic approval rating surged 6 points to 51 percent with just 36 percent of the public disapproving, a 6 point drop from the March Survey...His overall approving rating rose 2 points to 41 percent from the first quarter survey, but the percentage of Americans who disapprove dropped 10 points to 47 percent, the lowest recorded by CNBC during his presidency. Trump’s approval rating remains negative, at minus 6, but it’s also the lowest negative rating recorded since he took office...

The rise in the president’s economic approval comes with growth running about a percentage point higher than it did during the Obama presidency, with unemployment near a 20-year low and amid what is believed to be a very strong quarter for growth. That has translated into positive views by the public on the economy that are reaching new records for the survey. Fifty-four percent of Americans say the economy is good or excellent, the highest recorded by CNBC in the 10 years of the survey. Just 43 percent say the economy is fair or poor, the lowest in the history of the survey. Positive views on the economy have surged 20 points since the election.

I can't find CNBC's crosstabs, but their report suggests that the poll also gives Republicans a small edge on a generic ballot-style question (with far too many undecides for my liking), and says that tax reform is among Trump's most popular policies. He's also above water on tariffs, but that could change in a hurry when jobs are lost, accounts go elsewhere, and costs rise on American consumers.  Here's just one entirely predictable direct consequence:

If there's anything the president could do to disrupt his own economic mojo, it's fueling and feeding harmful trade wars.  Meanwhile, as we noted earlier, CBS' data found that the administration's polling on its (reluctantly and temporarily reversed) family separation policy was (quite rightly) atrocious, yet it was offset by economic satisfaction. CNBC notes that its survey was in the field during the height of the controversy: "A comparison of the polling conducted Saturday and Sunday with Monday and Tuesday, when the story was more prominent, shows little difference despite considerable public outrage," the write-up explains.  I'll leave you with an intriguing essay that hits on immigration, trade, and the economy, penned by soon-to-be Senator Mitt Romney:

Here’s where I stand on the Trump Agenda; I appreciate the argument made by those who believe we should stay silent, but I cannot subscribe to it. https://t.co/6UfJaMt88L