Analysis: Trump's Foolish Trade War Would Hammer His Own Base, Erode His Economic Achievements 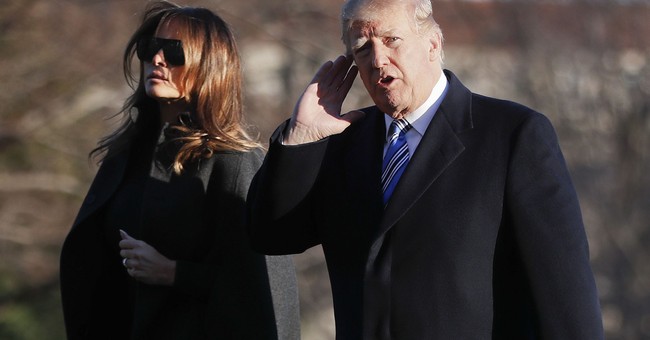 Katie mentioned some pushback from Ryan's office in her post yesterday, but it's worth raising again, as Republicans and conservative groups begin to fret that the president is poised to undo some of the major economic progress over which he's presided.  Trade wars are lose-lose events, benefiting a small handful of protected industry workers, while effectively raising taxes on millions of consumers through rising costs.  Tariffs on steel and aluminum will raise the price of those goods, increasing the cost of doing business for anyone who uses those materials.  That outcome, in turn, will impact related industries big and small, many of which will pass down their heightened costs to customers in the form of larger price tags.  And that's even before the retaliation games begin.  In the tough Wall Street Journal editorial we quoted last week, the editors warned about the adverse impact of these self-destructive spirals:

Instead of importing steel to make goods in America, many companies will simply import the finished product made from cheaper steel or aluminum abroad. Mr. Trump fancies himself the savior of the U.S. auto industry, but he might note that Ford Motor shares fell 3% Thursday and GM’s fell 4%. U.S. Steel gained 5.8%. Mr. Trump has handed a giant gift to foreign car makers, which will now have a cost advantage over Detroit. How do you think that will play in Michigan in 2020? The National Retail Federation called the tariffs a “tax on American families,” who will pay higher prices for canned goods and even beer in aluminum cans. Another name for this is the Trump voter tax. The economic damage will quickly compound because other countries can and will retaliate against U.S. exports. Not steel, but against farm goods, Harley-Davidson motorcycles, Cummins engines, John Deere tractors, and much more. Foreign countries are canny enough to know how to impose maximum political pain on Republican Senators and Congressmen in an election year by targeting exports from their states and districts. Has anyone at the White House political shop thought this through?

On that last question, a small group of advisers were pushing Trump to follow his protectionist instincts on this foolhardy plan, but most of this administration was adamantly opposed to it, from his top economic advisers to the Secretary of Defense.  Far from being 'thought through,' the president sandbagged his own team with his announcement, meaning that his policy, politics and communications shops were caught flat-footed.  As I said on Fox, this move hits the trifecta of stupid policy, stupid politics, and stupid procedure:

.@guypbenson on President #Trump's tariff plans: “I think this is a terrible policy. I think trade wars are lose-lose propositions.” #TheStory https://t.co/fdH7kvJ9VZ pic.twitter.com/0QZ13hvG6A

Trump, meanwhile, has gone from openly spoiling for a harmful trade war to downplaying that risk.  He's all over the place.  But policy countermeasures from foreign governments fashioned specifically to hurt American industries weren't a hypothetical risk of tariffs; they were inevitabilities.  And away we go:

European Union officials are already planning retaliatory actions, targeting products from politically sensitive Republican-run states, including the imposition of tariffs on Harley-Davidsons made in Speaker Paul Ryan’s home state of Wisconsin; duties on bourbon made in Senate Majority Leader Mitch McConnell’s home state of Kentucky; and duties on orange juice from Florida, a critical swing state. Across the globe, Trump’s plan to impose a 25 percent duty on steel and a 10 percent duty on aluminum imports would alienate dozens of countries in Europe, North America and Asia, many of them longtime allies and trading partners, who could turn the tables by targeting key U.S. sectors such as agriculture and aircraft, based in states that elected him and fellow Republicans.

These tariffs are pointed like laserbeams at states carried by Trump and represented by top Republican leaders. The Europeans want Trump's own voters to suffer the consequences of his bad ideas, and seem intent to extract a political price on Trump's party.  If Trump digs in, targeting these companies is just the beginning. Ryan is practically begging the White House to rethink it's plan, circulating news accounts about US markets opening the week with more drops in key sectors, in anticipation of totally self-inflicted body blows:

Stocks opened lower on Monday as investors mulled over potential U.S. steel and aluminum tariffs. The Dow Jones industrial average fell more than 100 points at the open. Boeing and Caterpillar were among the worst-performing stocks in the index, falling more than 1 percent each. The S&P 500 declined 0.5 percent, with financials and industrials as the worst-performing sectors. The Nasdaq composite pulled back 0.3 percent. President Donald Trump announced last week the U.S. will implement a 25 percent tariff on steel imports and a 10 percent tariff on aluminum imports. The news sparked fears of a potential global trade war as world leaders condemned the announcement. In response to the U.S. tariffs, the European Union proposed tariffs on Harley-Davidson bikes and other U.S. products. Equities fell following Trump's announcement, with the Dow closing 420 points lower on Thursday. The S&P 500 and Nasdaq also closed lower that day. "The bears could make a comeback if President Donald Trump turns into an outright protectionist," Ed Yardeni, president and chief investment strategist at Yardeni Research, said in a note Monday. "More likely is that he will back off if the market continues to react badly to his protectionist pronouncements."

Trump insists that he won't back off, but one wonders how much damage to his own base he's willing to inflict. Via Allahpundit, here's sharp conservative economist Keith Hennessy reminding the Trump administration that, yes, trade wars are undeniably and empirically bad for all involved -- including an awful lot of Americans who are quintessential denizens of Trump Country:

The costs will be concentrated on the American products and firms that use a lot of steel and aluminum, and on the consumers who buy those products. The shirt you buy may not get more expensive, but the washing machine, car, and beer can will. The direct harm will fall on those products and firms most sensitive to changes in those input prices. In addition to harming Americans who buy and build appliances, vehicles, and containers, President Trump’s import tariffs target other Americans for harm. Farm equipment will cost more. Homes and office buildings will be more expensive to build, buy, and rent. Bridges, rails, and tunnels will cost more. So will cell towers, pipelines, power plants, and water pumping stations. Agriculture Secretary Perdue and Transportation Secretary Chao cannot ignore these costs, even if Commerce Secretary Ross does. Within any given budget, the Pentagon will be able to buy fewer rifles, bullets, tanks, ships, and airplanes. Secretary Mattis will get less bang for the buck. There is indirect harm not included in Ross’ $9 billion number: Tariffs distort prices and decision-making, misallocating society’s resources and making everyone worse off.

Trump's apparent "solution" to this would be...more tariffs:

Yeah, that'll show 'em. Does he honstly believe that such a follow-on action wouldn't spur additional foreign retaliations, hammering even more American businesses and customers with completely needless cost hikes? It's a dead-end.  And by the way, by spooking the Canadians (with whom we have a trade surplus, according to the US government, a statistic Canada disputes) on such a sensitive and integral issue to their economy, Trump could undermine NAFTA renegotiations, on top of everything else. I'll leave you with Mitch McConnell trying to remind Americans about the genuinely terrific economic news that keeps arriving in waves, much of which can be attributed to the Trump/GOP partnership's pro-growth agenda of right-sizing regulation and tax reform.  There is no good reason to jeopardize and reverse any of this with consensus anti-growth policies: