Analysis: Barring an Earthquake, Mitt Romney Will be a US Senator. What Does That Mean for Trump? 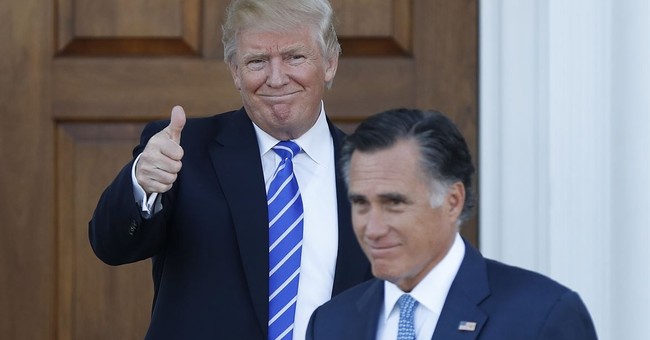 As Cortney noted earlier, Mitt Romney has made his long-expected announcement that he's running for US Senate from the state of Utah, vying for a seat being vacated by Orrin Hatch.  If you think my headline is a tad presumptuous, I'd usually agree.  But we've highlighted these numbers before -- Romney can safely be called an overwhelmingly prohibitive favorite to win this face in a cakewalk:

I think Romney has a chance, you guys. pic.twitter.com/pjN6Xx3zoM

If you missed it earlier, here is the former GOP presidential nominee's video unveiling his candidacy:

This is the sort of "I'm back" piece the only someone with near-universal name recognition can pull off:

Except for reminding people about the 2002 Salt Lake City Olympics, the bio section of Romney's video basically picks up with "here's what we've been up to since 2012."

In short: He's in, and he's virtually guaranteed to win.  Remember that Utah GOP official who criticized Romney's decision to run for Senate in his state a few days back?  He beat a hasty retreat, after reportedly facing intense pushback from Republican bigwigs across the state, quickly apologizing and 'clarifying.'  The wagons are officially circled:

My response to today’s Salt Lake Tribune article regarding @MittRomney and the upcoming Utah US Senatorial race. #utpol @UtahGOP pic.twitter.com/jBYXPPmNZi

As we look ahead to the campaign and Romney's nearly-inevitable swearing in, some observers are eager to watch for the emergence of a heavyweight battle between Mitt and President Trump; after all, the former has sharply criticized the latter on a number of occasions.  But this smart piece in The Atlantic lays out how Romney plans to chart a GOP path forward that runs parallel to Trumpism -- without gratuitously antagonizing Trump:

Over recent weeks, much of the national pundit chatter has focused on whether he will be returning to the political arena as a friend or foe to Donald Trump. But in interviews this week, advisers and allies close to the candidate told me he will seek to avoid direct combat with the president this year, and emerge instead as a full-throated pitchman for his adoptive home state—making the case that Utah’s distinctive brand of conservatism could offer a better way forward for the GOP and the nation...Romney is a true believer in the Utah model of governance—and he plans to make it a central theme of his campaign. Rather than define himself as the Republican antidote to Trump, he will champion a brand of Republicanism that he believes could be the antidote to Trumpism. Rather than barnstorm the state with withering condemnations of the president’s character—as he did in 2016, when he denounced Trump as a “phony” and a “fraud”—he will seek to advance a proactive policy vision to contend with Trump-style nationalism.

Romney will continue to call out the president’s behavior when he  feels compelled to, advisers say—as he did in the wake of Charlottesville—but he won’t be piling on after every outlandish early-morning Tweet. “I would be surprised if he mentions Trump’s name 10 times on the campaign trail,” said Miller. Of course, such a strategy is unlikely to satisfy those yearning for a dose of #NeverTrump catharsis in Romney’s rhetoric. “I think a lot of people are predicting this kind of cage match between Romney and Trump,” said Boyd Matheson, who served as Senator Mike Lee’s chief of staff and is now an editor at the Deseret News. “Some of those people hate Romney, and some of those people hate Trump, and both of those groups are going to be sadly disappointed. He’s not going to pick fights with the president just for the sake of picking fights.”

This is the correct approach.  He'll have zero obligation to Trump, and can oppose him whenever the moment demands it, in his judgment.  But there will still be significant overlap between the president's political interests and Romney's -- and politics is a team sport, even if the team is dysfunctional and rife with disagreements.  I'll leave you with the best idea for a Romney ad I've seen, if only as a delightful troll of Democrats' newfound Anti-Russia hawkishness, and a reminder of how wrong you-know-who was about so many important things:

If I were Romney, I would have just said "I guess the 1980s did call and ask for their foreign policy back."