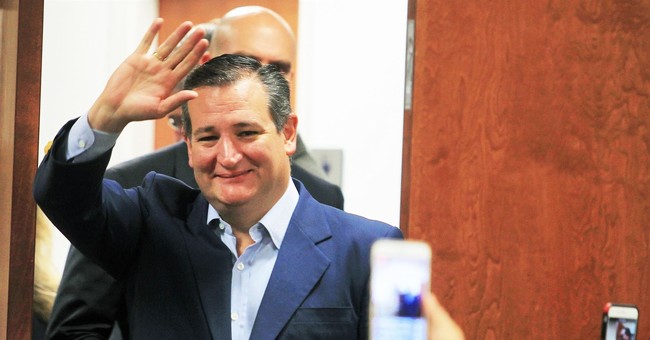 Just a few weeks ago, the media was abuzz about liberal Democrat Beto O'Rourke's chances to unseat Texas Senator Ted Cruz (a.k.a. "that piece of garbage," according to our moral superiors).  A blue wave was brewing, it seemed (ahem), O'Rourke was raising money hand over fist, and a fresh poll showed the contest within just three points, inside the margin of error.  In deep red Texas, of all places!  Perhaps Beto's glaring primary night weaknesses had already dissipated, and 2018's inevitable nationwide stampede to the Left was underway; political gravity was starting to impose its will.  Or perhaps giddy liberals were once against wish-casting their way into delusion.  Quinnipiac's newest survey shows Cruz shaking off his (supposedly) weak start and opening up a double-digit lead.  Look at some of these internals:

Cruz is dominating among men and whites, but also slightly leading with...women and hispanics.  Meanwhile, O'Rourke is only pulling 70 percent of black voters, and leads very marginally (46/41) among 18-34 year-olds.  The national electoral climate could shift back in Democrats' favor in the coming months, but one real red flag for O'Rourke here is his low name ID.  Yes, he'll have barrels of money to throw at Cruz in a drumbeat of attacks, but Cruz is a known commodity in the state.  O'Rourke is not.  Team Ted has a major opportunity to define Beto O'Rourke to voters who aren't particularly familiar with him -- and I'd wager that a lot of Texans aren't going to be enamored with the thought of sending an NRA-cursing, pro-impeachment, abortion radical leftist to Washington.  By the way, the Lone Star State's gubernatorial contest is looking even more lopsided, with Greg Abbott parlaying strong popularity (53/27) and impressive leadership into a commanding, broad-based lead:

Another nugget from that new Texas Q-poll: Gov. Greg Abbott leads his Democratic challenger by 19 points overall in #TXGov -- including a double-digit lead among young voters...while pulling in ~1/5 black voters. pic.twitter.com/2jtNehbAhJ

Again, this is just one poll, and Texas Republicans' fortunes could head south.  But these are not data points that indicate a serious Democratic wave is building, at least in certain GOP strongholds.  Meanwhile, with a new poll showing conservative challengers leading Sen. Claire McCaskill in Missouri, the resignation of scandal-plagued Gov. Eric Greitens comes as a relief for Republicans in that state.  The Senate frontrunner, Attorney General Josh Hawley had called on Greitens to step down, threatening to open up a nasty intra-party rift, especially as the Republican-dominated legislature pursued impeachment.  That ugly chapter now appears to be about to come to a close, giving the party months to unify and train their fire and attention on the hyper-vulnerable McCaskill.  I also, found this virtual whisper of a favorable poll number to be intriguing:

Take that piece of information with a large grain of salt, but if the Ohio Senate race is actually competitive -- most experts have assumed liberal Sherrod Brown will coast to re-election, even though Trump carried the state comfortably -- that could mean that Democrats' resources will be stretched extremely thin.  This is also true if they have to play defense in New Jersey on behalf of Bob Menendez, who avoided a federal corruption conviction last year thanks to a hung jury.  Democrats will already need to pour money into Florida, where popular governor-turned-Senate-candidate Rick Scott is running an aggressive and competitive campaign.  Here's his latest ad down there:

Beyond the Senate map, I'll leave you with two tweets -- good news and bad news for Republicans out of California.  The good news could limit Democrats' expected House gains in that deep blue, vote rich state.  The bad news is...really bad:

Republicans are now, numerically, a third party in California:https://t.co/7fN0v07Tyx pic.twitter.com/SS74z1Nyz7