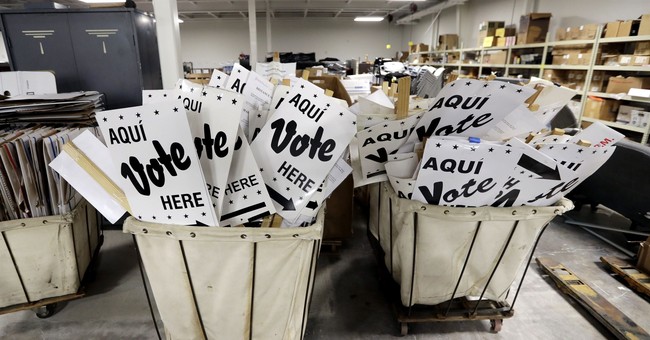 Because I wrote a somewhat Eeyore-ish piece this morning -- the lessons of which are important for Republicans to take seriously, by the way -- I feel like I owe you a sunnier analysis, too.  Matt ran through much of what happened in Texas' primaries last night, but I wanted to highlight a few points.  While Democrats certainly outperformed their dismal showings in 2010 and 2014 in the Lone Star State, Tuesday did not quite bring about the blockbuster results they were hoping for.  Democratic primary voters represented 40 percent of the overall electorate yesterday, which is an okay number, but still south of the 44 percent mark they achieved in the wave year of 2006.  Much has been made of the internal battles within the party over contested House seats, but let's look at the two major statewide races through the lens of primary turnout.  First, in the US Senate race, DC has been buzzing about Democrat Robert "Beto" O'Rourke's fundraising numbers, boosted by out-of-state liberals.  When voters went to the polls, he underperformed in many important areas of the state, and toward the end of the evening, this was the state of play:

Ted Cruz currently has more votes in an *uncontested* GOP primary than every Democratic candidate in the Dem TX-SEN primary combined.

Folks, Cruz is going to win in November. Unless he's been found Roy Moore-ing after 13 year olds in the local shopping mall.

Cruz did not have a serious primary opponent.  Republicans had little motivation to turn out in droves over that race, whereas all of the purported excitement and competition on the Democratic side was supposed to be a major deal.  By the time the ballots were all cast, 500,000 more Texans voted in the GOP primary than the Democratic one, and the top finishers on each side were separated by 676,000 votes.  Ted Cruz, running in an effectively uncontested primary, drew more than double the number of votes won by O'Rourke.  The Cruz campaign welcomed the Democrat to the general election with a corny country music song highlighting O'Rourke's liberalism:

The story was much the same in the gubernatorial race, where popular incumbent Gov. Greg Abbott dominated all candidates in both parties.  In total, just over one million Democrats participated in their primary; well over 1.5 million Republicans did the same.  One additional point: Much of the hype in anticipation of the Texas results was based on very limited results of early voting tallies from the 15 largest counties in the state.  Things were looking quite robust for the Democrats.  But then came the totals from, uh, the rest of Texas:

One place where relying on available data can mislead you. Texas tracks EV, but only in the 15 biggest counties. Dems led by 40K.

Oh. In any case, it would be insane for Republicans to gain a false sense of security from primary outcomes in the largest red state in America.  The midterm elections favor Democrats, based on history and intensity.  But Tuesday was just the latest reminder that Democrats' designs to flip Texas blue is still much, much easier said than done.