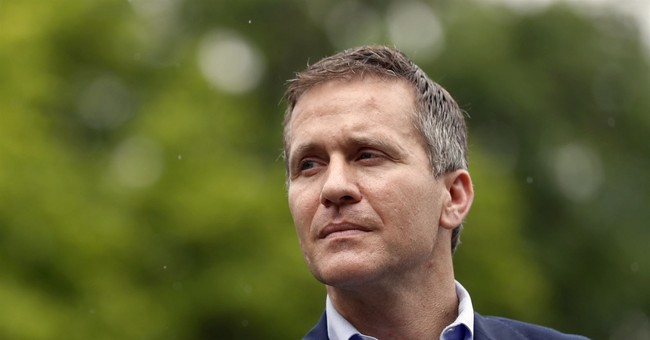 Well, if there is one person who should be slightly more worried about her 2018 re-election chances, it’s Sen. Claire McCaskill (D-MO). We have reports that Republican Gov. Eric Greitens will resign after being engulfed in controversy over an extramarital affair. Criminal charges were filed, a trial started, and reports of sexual misconduct stemmed from the governor’s office (via Fox News):

Missouri lawmakers on both sides of the aisle are calling on Gov. Eric Greitens to resign following a report that an affair he had was at times violent and non-consensual.

Greitens was indicted in February on a felony invasion-of-privacy charge. He was booked at the St. Louis Justice Center before he was released on his own recognizance, according to a circuit attorney spokeswoman.

The charges came after a man secretly recorded his wife admitting to having an extramarital affair with Greitens in March 2015. In the recording, she alleged that Greitens took a photo of her when she was partially nude without her permission and threatened to release photos of her if she told anyone about the affair, KMOV-TV reported.

The couple, not publicly identified, have since divorced.

Greitens admitted to the affair in February in a joint statement with his wife, Sheena. He said he'd made a “deeply personal mistake” before he was elected, and that the family had “dealt with this together honestly and privately.”

The woman said she met Greitens in 2013 when he became a client at the hair salon where she worked, according to the report. She said that she developed a “crush” on Greitens, but when she saw him in the salon in March 2015, he “moved his hand up her leg ‘all the way up to [her] crotch’ without her consent."

Later that month, she said Greitens asked her to come to his house when his wife was out of town. She said he did not want to be seen in public with her because he was running for office.

At his house, she testified that Greitens told her he thought she hadn’t “been treated good in so long” and wanted her to exercise. She said “for whatever reason, I trusted him.”

When the two got to the basement, the woman alleged, Greitens taped her hands to the pull-up rings and blindfolded her. She said the items he used were already on a workout bench nearby.

He then spit water into her mouth, telling her she needed to be hydrated, she testified. She said it was his way of trying to kiss her, but she did not want to be kissed.

Greitens began to kiss her, and he tore off the white shirt, she testified. During this time, he was also “pull[ing] down [her] pants,” but she did not give consent, she said.

Still, Greitens had refused to step down, even after members from both sides called for it. State Attorney General Josh Hawley, the frontrunner for the GOP senate nomination, has called for Greitens to resign. McCaskill has already tied Hawley to Greitens in her attacks. There was concern that the Greitens drama could pollute the state GOP, once again providing McCaskill with a possible lifeboat created by Republicans. It wouldn’t be the first time.

McCaskill was vulnerable in 2012, but former Rep. Todd Akin’s horrible remarks about rape allowed her to skate to another term, while also painting the GOP in a terrible light, fueling the Democrats’ war on women narrative that year.

The invasion of privacy charge was dropped earlier this month, but Greitens is still not out of the woods. The prosecution has signaled they would re-file charges and might even appoint a special prosecutor for this case (via WaPo):

St. Louis Circuit Attorney Kimberly Gardner dropped the felony invasion-of-privacy charge stemming from allegations that Greitens took a nude photo of a woman without her consent. The decision came after a judge ruled that the governor’s lawyers could potentially call Gardner as a witness in the trial.

“It’s a great victory and it has been a long time coming,” Greitens, 44, a Republican and a former Navy SEAL, told reporters after his case was dismissed. The governor has repeatedly denied any criminal wrongdoing and dismissed widespread, bipartisan calls for his resignation.

But Greitens’s political and criminal troubles aren’t over. The circuit attorney said she intends to refile the charge and may appoint a special prosecutor or one of her assistants to pursue the case. Greitens still faces another felony charge of computer tampering tied to allegations that he improperly used a veterans’ charity donor list to raise funds for his 2016 campaign for governor.

So, with Greitens gone, the Missouri state GOP can breathe a sigh of relief that this fiasco is over.

Bill Maher: Liberals Are the Fun Suckers Now
Townhall
Biden doesn't see much evidence that people are getting paid to stay home instead of work (then explain THIS)
Twitchy
Here Is Why the Democrats Are Totally Panicked About the Arizona Audit
Redstate
Yes, Biden Is Swindling Americans: White House Staffer Lets the Cat Out of the Bag
PJ Media