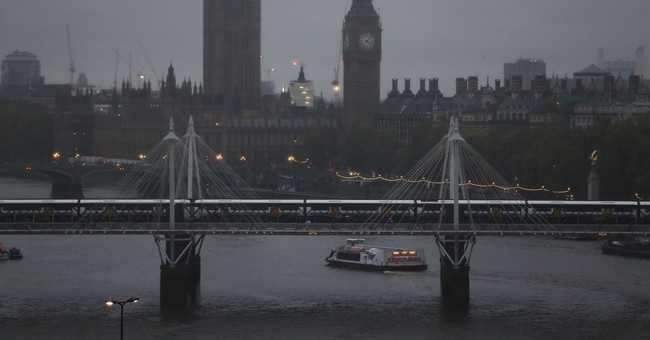 In our post late last week, I made passing reference to the fact that the imposition of extremely stringent gun laws in other countries have not prevented people from finding ways to kill each other (or themselves) at high rates.  One of the pieces I linked to was a news account describing how the murder rate in London -- where civilian gun ownership is effectively banned -- has recently exceeded that of New York City.  The London Sunday Times reports:

London overtook New York in murders for the first time in modern history in February as the capital endured a dramatic surge in knife crime. Fifteen people were murdered in the capital, against 14 in New York. Both cities have almost exactly the same population. London murders for March are also likely to exceed or equal New York’s. By late last night there had been 22 killings in the capital, according to the Metropolitan police, against 21 in the US city. Eight Londoners were murdered between March 14 and March 20 alone and the total number of London murders, even excluding victims of terrorism, has risen by 38% since 2014.

A number of gun rights activists have used this fact to underscore the truism that gun control does not necessarily equate to murder control.  Nevertheless with an uptick in violent crime in the UK's largest city, some public officials are scrambling to find things to blame, ranging from police budget cuts, to restrictions on certain police practices, to the tools being used by criminals.  Something, after all, must be done.  And their "solutions" are really quite something.  Sometimes when weapons other than firearms are used in murders, conservatives dial up the social media snark, suggesting that perhaps politicians should push for policies to ban those things, too.  "Time for some common sense knife control," is a typical tweet in this vein.  But what happens when satire becomes reality?  Ta da:

Anyone buying a knife online will be banned from having it sent to a residential address, under a government crackdown following a surge in street stabbings. New legislation, to be brought forward within weeks, will also make it illegal to possess zombie knives and knuckledusters in private – or any knife on further education premises...The measures – which also include a ban on acid sales to under-18s – will all be included in a new “serious violence strategy”, to be launched by the home secretary, Amber Rudd, on Monday...“This government has always stood for law and order and to tackle violent crime effectively, robust legislation and powerful law enforcement must be in place,” the home secretary said. “That’s why we will introduce a new offensive weapons bill that includes a new offence of possessing acid in public without good reason, prevents sales of acids to under 18s and stops knives being sent to people’s homes when bought online.”

That's the program being supported by the country's conservative government, mind you.  The left-wing Labour Party has "welcomed" the proposal, but also want the Tories to spend more money on policing.   Here's the Labourite Mayor of London:

No excuses: there is never a reason to carry a knife. Anyone who does will be caught, and they will feel the full force of the law. https://t.co/XILUvIFLOW

There is never a reason to carry a knife?  What about to defend yourself against the criminals murdering people in London?  Or is self-defense now officially becoming a criminal offense in Great Britain?  And might some people occasionally have knives on their person because they need to do things like, you know, cut food?  And why ban home deliveries of knives?  Can't people just buy them in stores?  Will this nonsense deter criminals or thwart crime?  Let's see what one of the "experts" has to say about that:

No, this isn't a parody article. This is a real policy argument they're having in the UK. https://t.co/JafDdaWnOK

Dr John Crichton, the new chairman of the Royal College of Psychiatrists in Scotland, wants the sale of pointed kitchen knives to be banned to help reduce the number of fatal stabbings. He first suggested the move three years ago, but his proposal did not win enough support from policy-makers. Since then dozens of people, including schoolchildren, have lost their lives as a result of attacks involving bladed instruments...He said that research shows many attacks, particularly in households where there has been a history of violence, involve kitchen knives because they are so easily accessible...He said: “This is a public health measure and public health measures are always about society deciding on a self-imposed restriction for the public good.”

Some things truly are beyond parody.  Including requiring a photo ID to purchase cutlery, apparently including plastic knives.