BREAKING: No Obamacare Funding, No DACA, Some Border Security in Emerging Budget Deal 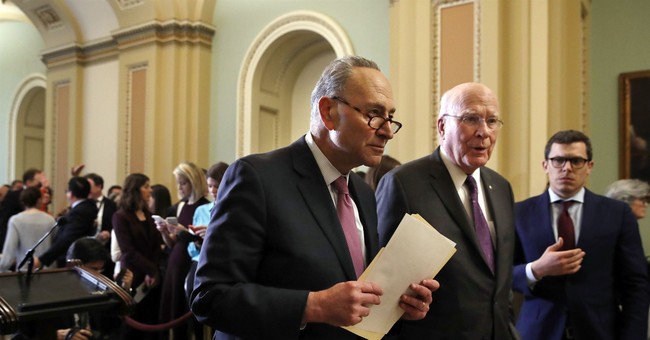 UPDATE - It looks like a deal has been reached, with Democrats sounding pretty darned happy about it.  Paul Ryan also seems upbeat.  But what, exactly, will this monster of a spending snowball include?  Details are just beginning to emerge, but thus far it looks like Obamacare doesn't receive funding, and DACA has not been addressed -- but President Trump got at least some of his border security money:

Quote: "Domestic accounts would get a generous 10 percent increase on average as well, awarding Democrats the sort of spending increases they sought but never secured during the Obama administration."  Surprise. Meanwhile, 'Fix NICS' (see below) will reportedly stand alone in the legislation, without pro- or anti-gun companion provisions, which is what some Republicans and Democrats wanted (and which President Trump appeared to reject not very long ago). All in all, myriad elements of the bill are positive; others are disappointing.  But the overall process remains terrible, and the trajectory of federal spending remains pointed inexorably upward.  As I've written before, neither of these political parties is really serious about the national debt or fiscal prudence.  That's the harsh reality.

ORIGINAL POST - Washington is careening toward another government funding deadline, with top lawmakers struggling to hammer out details of a giant 1,000-plus page spending bill behind closed doors -- on which members will likely be asked to vote by the end of the week.  You'll recall that both parties recently agreed to a two-year deal that set spending levels over that time horizon, but Congress is still required to fill in the blanks on how to allocate the cash ($1.3 trillion in this case).  That process has been underway for weeks, with progress getting slowed by snags on a handful of issues, including hot-buttons like guns and immigration. I'll return to the former in a moment, but on the latter, it looks like Democrats -- who've already rejected the White House's broadly-supported 'four pillars' DACA compromise proposal -- are also uninterested in a narrower swap.  The Washington Post reports:

Trump also pushed Ryan and Senate Majority Leader Mitch McConnell (R-Ky.) in recent days to close a narrow deal that would protect immigrants enrolled in the Deferred Action for Childhood Arrivals program for three years in exchange for $25 billion in border wall funding, according to two Republican officials familiar with the discussions...Democrats were pushing for protections for a larger pool of immigrants, but a Democratic aide said the White House was rejecting that approach. The aide said Tuesday that there are continued musings about a deal but that chances for an agreement were remote.

Republicans offered a three-year extension of DACA for all current recipients (the original Trump plan turned down by Democrats would have covered hundreds of thousands of additional eligible 'DREAMers' who never enrolled in DACA) in exchange for $25 billion in wall and border security funding. Other (again, popular) elements of the original plan were off the table, including chain migration and the 'diversity visa' lottery. Democrats have apparently once again said no, leaving prospects for a DACA resolution at a standstill [see update].  DACA technically expired earlier this month, but Democrats seem to be comfortable allowing the issue to languish in the courts until they have more power and leverage to fashion legislation that's more to their liking.

As an aside, it's infuriating to conservatives that an executive action conjured into existence by the stroke of a president's pen cannot simply and quickly be undone with another presidential signature.  It remains unlikely that the judiciary can permanently block Trump on this, but they can gum up the works for awhile. For their part, Democrats are risking angering an element of their base by again declining to play shutdown politics with DACA, but their lone previous attempt to do so ended badly for the party.  The only "concession" they "won" as they retreated from that misadventure was an agreement from Mitch McConnell to allow a series of immigration votes in the future. And when that future arrived, the Senate agreed to...nothing.  Speaking of which, let's turn to gun policy:

Fix NICS is still up in the air for omnibus Fox is told Ryan and McConnell want to include it. But Democrats are reluctant to include it because they feel that’s all which would ever be addressed on guns.

WaPo has more: "The White House and Republicans also pushed for inclusion of a measure known as the Fix NICS bill that would compel federal agencies to more correctly and accurately report information to the national criminal background check system. Democrats were seeking to couple that provision with a gun measure of their own."  In the past, Democrats criticized Republicans for insisting that concealed carry reciprocity be linked to 'Fix NICS,' which was a fair point.  But now the roles have apparently reversed, with Republicans offering the bipartisan background check bill as a standalone element within the larger package -- and it's Democrats threatening to axe it if it's not coupled with more gun control.

We'll see if this cynical approach is rewarded in the final legislation.  Making consensus progress on background checks and school safety should be no-brainers, but agenda-driven poison pills are capable of derailing almost anything, it seems.  That's how gun votes have gone in recent years.  Finally, Obamacare funding is a flashpoint in this debate.  Will Congress agree to provide funding for the failing law (this is an interesting development on that topic, incidentally), or not?  And while we're on the subject, shouldn't the GOP use this opportunity to further dismantle President Obama's signature, unsuccessful domestic policy achievement?

Why not use the omnibus spending bill to repeal/dramatically curtail Obamacare's employer mandate -- implementation of which Obama unilaterally/illegally delayed several times & drastic changes to which have been supported by multiple Senate Democrats? https://t.co/Rlvt0bldIP