Under Pressure From the Left, Paul Ryan Deleted a Tweet. He Shouldn't Have. 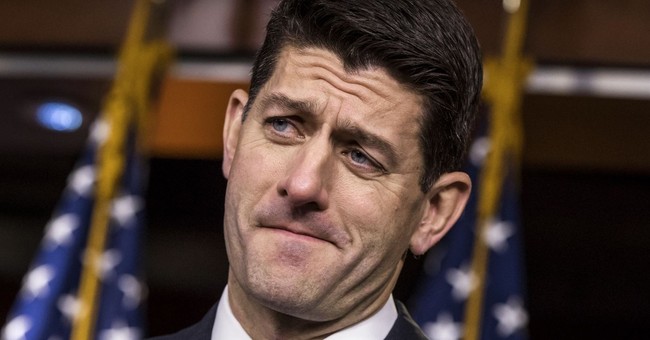 Last week, we highlighted an Associated Press story about the new tax law that pummeled the Left's anti-tax reform taking points with a series of resounding body blows.  It drew attention to American workers who are just starting to discover the effects of the tax cuts, in the form of fatter paychecks.  Liberals assailed the Republican proposal in demagogic and hysterical terms, misleading the public through shameless scare tactics and falsifiable disinformation.  Their lies -- and that's what they were -- are being exposed by reality each day, resulting in an astounding 20-point polling bounce over the course of just one month.  Nearly all of that rebound is attributable to the parade of headlines about companies paying out tax reform bonuses, raising wages, stepping up employee benefits, expanding operations, and hiring new workers.

Even with the dramatic increase in support for the tax law, the polling still showed that a large majority did not believe that they personally would receive a tax cut.  In fact, 80 to 90 percent of taxpayers will, and that verifiable truth is being confirmed as people start to see their effective pay raises show up in their bank accounts.  Empirical evidence is puncturing liberals' mendacious talking points.  The AP reporter whose work we showcased spoke to a number of Americans who were pleased and surprised by their tax cuts, including a liberal engineer who mouthed typical Democratic complaints about the plan, yet had to concede that he couldn't be too upset over the substantial tax cut he received. But it was this quote that really struck me as particularly meaningful:

The woman was actually a public school secretary, not a teacher, but the point stands: Her quote was telling and problematic for Democrats.  Why?  First, she noticed the very small $1.50 surge in her weekly take-home pay.  Nancy Pelosi, Chuck Schumer and Debbie Wasserman Schultz have (hypocritically) been running around dismissing bonuses of between $1000 and $2500 as mere "crumbs."  This woman arguably is getting relative crumbs, but she's unambiguously pleased about it because she did the math and realized that it's going to cover a cost that will allow her to save money while feeding her family for a year.  "Crumbs" make a difference to real people in their lives.  Second, if liberals were hoping that average Americans wouldn't even recognize their 'scraps' because the dollar amounts were so insignificant, this woman burst that bubble.  If someone can get excited about a few bucks a month, others will surely appreciate their substantially larger tax cuts and/or four-figure bonuses.

Third, perhaps she's extra satisfied by her unexpected tax cut because Democrats spent so much time and energy insisting that the GOP plan wouldn't help working or middle income people.  You see, when you lie to people (telling them they'll be worse off, or might even die), then they realize they're actually better off and very much alive, that deals a blow to your credibility.  It's also a win for the people who passed the law that is vastly outperforming your deranged predictions about it.  Ironically, liberals helped create an environment in which the effects of the law will seem even better than they otherwise would be, directly because of their hyperbolic opposition. This is a political own goal, especially since every single Congressional Democrat voted 'no' on something that is helping a lopsided majority of American taxpayers.  In any case, House Speaker Paul Ryan tweeted out the AP story and highlighted the school secretary's quote.  Prominent Democrats and assorted leftists immediately piled on, attacking him for celebrating such a tiny amount of money.  Amid all the criticism, Ryan unwisely deleted the tweet:

House Speaker Paul Ryan deleted a tweet Saturday touting the GOP tax overhaul after critics called him out for appearing out of touch with the reality of low-income individuals' financial situations. The tweet shared the story of a secretary who, according to a report by the Associated Press, was "pleasantly surprised her pay went up $1.50 a week."  "A secretary at a public high school in Lancaster, PA, said she was pleasantly surprised her pay went up $1.50 a week ... she said [that] will more than cover her Costco membership for the year," Ryan tweeted with a link to the full article.  A basic Costco membership costs $60 a year. People, including several prominent Democrats, noted on social media that $1.50 per week is not a significant pay bump.  "Paul Ryan deleted his embarrassing tweet of a blatant admission because he and Republicans don't want you to know the truth: the #GOPTaxScam is a gift to corporate America and the top 1% at your expense," Rep. Nancy Pelosi, D-California, tweeted.

The CNN story quotes a small army of liberals who joined in on the gang-harangue, including Ryan's would-be Democratic opponent (last heard from purchasing Twitter followers, after being exposed as being a delinquent deadbeat on his child support payments).  Deleting the original tweet was a mistake.  Rather than counter-punching and going on offense, Ryan appeared to concede that the Left's criticisms were valid.  They were not.    These liberals framed their attacks as if they were dunking on Ryan for bragging about the peanuts he deigned to give a working person while giving away billions to big corporations and the rich.  Let's set aside the facts that corporate tax cuts were needed, were supported by Democrats until recently, and are working.  What Ryan's critics were actually doing was dunking on this woman, Julia Ketchum.  They've attacked and demeaned her.  She is the one who said she was happy about her very modest tax cut, explaining how it would explicitly help her family.  Ryan didn't invent the quote or force her to say it.  He simply shared it.  Democrats hammering Ryan for doing so are basically 'elitesplaining' to this silly woman why her addled ladybrain shouldn't react positively to something as meager as a Costco membership.  That's a terrible, terrible look.

Rather than shrinking from this argument and yanking down the tweet, Ryan and Republicans should have counterpunched -- hard.  They could have blasted Democrats' ongoing and out-of-touch sneering, noting that this woman from Pennsylvania volunteered that the tax cut really is helping her family in a tangible way.  Who the hell is Nancy 'Lucille Bluth' Pelosi to argue with or denigrate Ms. Ketchum's lived experience?  Republicans could also have pointed out that Ketchum is likely especially upbeat because she was told -- falsely -- by Democrats that she wouldn't benefit at all, and might even get a tax increase.  Democrats were wrong, and she is the beneficiary of their wrongness.  Ryan et al could have also used the opportunity to remind others paying attention to this flare-up that average American families will receive a tax cut of between $900 and $2,000 this year, thanks to the succeeding law Democrats uniformly opposed.  The Democratic Party is flailing and aloof.  This line of attack on Paul Ryan, while understandably tempting on the surface, was actually a risky gambit.  Some deft political jujitsu could have flipped the script.  Caving to the hoard was a needless and harmful apparent concession.

It's Democrats who should pay a price for lying about and voting against a bill that's helping people, and for obnoxiously turning up their noses at a working woman for describing her positive reaction to the modest gains they claimed would never materialize.  Julia Ketchum has nothing to apologize for, and neither does Paul Ryan.