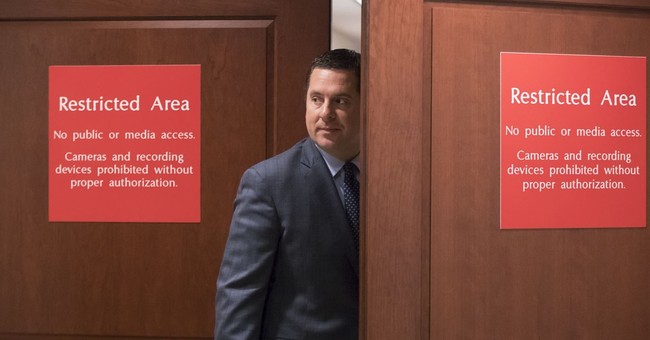 Confession: It's literally my job to follow national politics closely, yet I find myself perilously close to losing the plot -- and a great deal of interest, frankly -- in the ongoing investigations and 'memo' wars roiling Official Washington these days, most of which are fueled by back-and-forth anonymous leaks.  Here's my good-faith effort to bring you up to speed on a confounding blizzard of new twists and turns.  Don't quit reading before you get to item number five:

(1) Top FBI and DOJ officials have asked House Republicans and the president not to "release the memo."  Both FBI Director Christopher Wray (last heard from forcing ex-Deputy Director Andrew McCabe out over yet-undisclosed Inspector General findings about the Bureau's Hillary probe), and Deputy Attorney General Rod Rosenstein (who appointed Mueller and is overseeing the special counsel investigation) say the memorandum written by Republicans on the House Intelligence Committee paints an inaccurate picture of the relevant issues and makes crucial "material omissions."  This echoes the complaints of Democrats, who have written their own counter-memo, the public release of which the GOP contingent of the committee voted down on Monday.  But other senior law enforcement sources have told other reporters that the Republican document does not contain any factually false information.  I've said it several times at this point, but it's worth repeating: Let's see both partisan memos, along with as much of the (redacted) underlying intelligence as possible.  This selective game of telephone is getting exhausting.

Also, this may sound like hackery to some on the Left, but consider it anyway: How is the House GOP's desire to release details they find important or helpful to their interests materially different from any pieces of the nonstop leak-fest we've witnessed over the past year?  Virtually all of the information over which the media has obsessed has been partial, cherry-picked, and released (often via unnamed sources) in furtherance of some sort of agenda.  Republicans are at least being relatively transparent about what they're doing here, and are pursuing their "leak" through proper and official channels.  So there's one material difference.  As I said above, they should also authorize the release of the Democrats' memo, so we can judge the information's credibility, based on more information and context.  And by the way, does anyone believe the Democrats' memo won't leak in very short order anyway?

(2) Trump reportedly demanded to know if DAG Rosenstein is 'on his team.'  Trump obviously expects loyalty from his own appointees -- but, yes, he also doesn't seem to fully understand or respect the importance of an independent Justice Department.  I fully concede that any moves Trump may appear to be making toward undercutting Mueller's chain of command or legitimacy is cause for some concern.  But John Podhoretz, a frequent Trump critic, makes a solid point in response to those wringing their hands over this particular report:

Rosenstein is a political appointee. The president asking if he is "on my team" is not exactly an indictable offense here. What did Eric Holder say about Obama again? "I'm still the president's wingman"?

(3) Ranking House Intelligence Democrat Adam Schiff says the White House is reviewing a doctored memo.  He claims the version currently under scrutiny at the White House (Trump told a member that he '100 percent' supports its publication as he departed the State of the Union on Tuesday night) is not the finalized memo on which the committee recently voted.  Chairman Nunes made changes, Schiff asserts.  That might be a big deal.  Or it might not:

It's almost as if Schiff is desperate and disingenuous, raising a stink over alterations, some of which he'd requested (he also insisted that the FBI review the memo prior to any potential publication).  This isn't the first time someone has passed off dubious or debatable information to the press in recent days in or order to make Nunes look like a bad actor:

The transcript of Monday's House Intel meeting was just released, and it shows the exact opposite of what was claimed in this @DailyBeast article from yesterday. https://t.co/axaEZQpJ0R pic.twitter.com/gB6Ivrz5Qh

That said, some of Nunes' tactics are reportedly frustrating a number of fellow Republicans, including the retiring Trey Gowdy, a former federal prosecutor who prizes the law and proper procedure:

Retiring Rep. Gowdy "has found himself butting heads in recent months with Intelligence Chairman Devin Nunes and other pro-Trump Republicans who have hinted at corruption at the FBI" https://t.co/irndalAsKM

For what it's worth, the memo will likely be in the public domain very soon.

(4) Peter Strzok reportedly had a hand in FBI Director James Comey's call to formally notify Congress that the Bureau was re-opening the Clinton investigation in late October of 2016.  Strzok is the FBI agent removed from the Russia probe after Mueller discovered election-era anti-Trump text messages he exchanged with his paramour, a fellow member of the team -- including a cryptic reference to an "insurance policy" in case Trump won.  Comey's October decision was made, you'll recall, in connection to a trove of relevant emails discovered on the unsecure laptop of top Clinton aide Huma Abedin's estranged husband, former Congressman Anthony Weiner. Comey's letter to Congress sent shockwaves through Washington, and many Democrats believe it cost Clinton the election, even though (a) it was a defensible decision, and (b) Comey wrapped up the new phase of the investigation quickly and reasserted his questionable decision not to recommend charges prior to election day.

Side note: It's the FBI's internal actions surrounding the Weiner laptop emails that is apparently the basis for the ouster of McCabe, pointing to possible damaging information uncovered by the nonpartisan Inspector General's office, which is conducting an investigation into the Bureau's Clinton investigation (got all that?).  If Strzok helped launch arguably the deadliest anti-Hillary missile of the entire campaign, that would at least partially suggest that he was able to carry out investigative duties that conflicted with his personal partisanship.  Yes, the CNN story details that he was 'conflicted' about having done so, and this development doesn't erase his suspicious texts or his role in sanitizing Comey's July 2016 exoneration statement.  And yes, we know this information was leaked by someone with an agenda, if not Strzok himself.  But it still seems relevant, if true.

(5) Mueller may now have meaningful leverage over Hope Hicks.  Lots of 'ifs' and 'maybes' here, but this might actually be the closest thing to a real bombshell of the bunch.  If Mueller has something serious to use against Ms. Hicks, she knows a lot of things about a lot of people within Trumpworld:

Reminds me of the scene in FIRE AND FURY where Bannon is chewing out Hope Hicks and telling her to get a lawyer: "You don't know what you're doing. You don't know how much trouble you are in." https://t.co/K9cKktiH7p

Take literally everything written in "Fire and Fury" with a large chunk of salt (the first tweet there is based on NYT reporting), but one of the few elements on which Michael Wolff seems to actually have the goods is quotes from Steve Bannon.  Nevertheless, this is all a snapshot at this stage, and we don't know exactly what any of it means -- but I do know this: If the party roles were reversed, you'd better believe conservatives would be loudly declaring 'those emails will never get out' to be a five-alarm cover-up.  And by the way, said emails dealt with this infamous encounter at Trump Tower, which remains the strongest whiff of real or attempted collusion that we've seen over the course of this whole saga.  People are making that point that Hicks is likely the keeper of many secrets, and if Mueller has her in a vise, some high-level people may be sweating bullets.  That sounds right to me.

Finally, speaking of that summer 2016 Trump Tower meeting, are Mueller and company looking into Fusion GPS' role in this high-stakes soap opera?  If the goal is to get to the bottom of Russia's involvement in our election, which it ought to be, knocking on some doors at Fusion feels like a no-brainer.  They're the Democratic oppo research group that hired Christopher Steele, who compiled the dodgy anti-Trump dossier (paid for by the Clinton campaign and DNC) that is at least tangentially related to almost every Trump-linked controversy and battle mentioned in this post.  In assembling his file, Steele reportedly leaned on high-ranking...Russian officials.  We also know that the Russian lawyer (alleged to be a Kremlin cut-out) who attended that fateful meeting with Don Jr, Jared Kushner and Paul Manafort also met with the founder of Fusion GPS, both beforehand and afterwards, on that very day.  And she brought Fusion-furnished documents to the meeting.  It's not "whataboutism" to say that these curious details must be examined by anyone who's attempting to preside over a comprehensive review of Russia's electoral meddling.  The entire truth should be pursued.  Some of that truth might look very bad for Team Trump.  And some of it might indict Trump's opposition.  On Memo Eve, it looks probable that all of this will get uglier and more opaque before the American people get the full story.  Away we go...

Administration officials tell me #GOPMemo will be sent back to House Intelligence Committee on Friday with redactions from the #WH based on internal consultations w @FBI & other agencies. WH will not "release" memo but send it back to committee for it to release on its timetable