Trump To GOP Congressman On Release Of FISA Memo: It’s Going To Happen, 100 Percent Sure 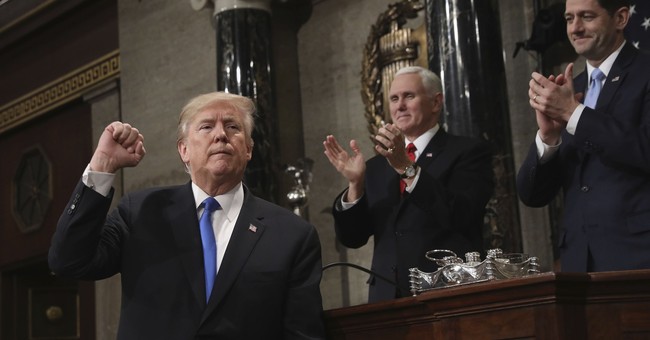 As President Trump made his way through the House chamber, shaking hands with fellow colleagues, one member, Rep. Jeff Duncan (D-SC) asked the president if he was going to release the memo; Trump was on the Hill to deliver the State of the Union. The president said it was going to happen, “100 percent” sure (via The Hill):

President Trump reassured a GOP lawmaker after his State of the Union speech that he backs releasing a classified Republican memo that alleges the FBI improperly used a surveillance program.

"Oh yeah, don't worry, 100 percent," Trump told Rep. Jeff Duncan (R-S.C.), who urged Trump as he was heading out of the House chamber to "release the memo."

The four-page memo alleges egregious FISA violations, with some lawmakers saying the activities are more in line with the work of the Soviet KGB. The Justice Department has told the House Intelligence Committee that it could be a reckless move to declassify the memo, citing harm to national security. Well, this week the committee more or less told the DOJ to shove it, voting to declassify the memo on a party line vote. Democrats say it’s a misleading document that offers no context because the corroborating documents are classified, though those documents are in the possession of the FBI/DOJ. Some House Republicans said that the memo could lead to deep changes at the FBI. The main item some are waiting for is whether the DOJ used a largely unverified Trump dossier to secure FISA warrants against members of the Trump team. The FBI reviewed the memo on Sunday, and then some of it was leaked to The New York Times the following day. The committee voted to release the document earlier this week. It’s just odd that the FBI/DOJ say they need to review it when they have all the pertinent papers, and then leak it when they said it was reckless to release this memo. Guy wrote yesterday that two top FBI officials read the memo and could not find any factual inaccuracies.