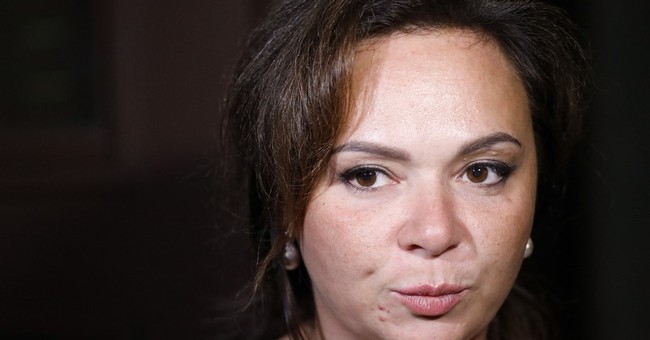 Earlier in the week, we learned that the female Russian attorney whose June 2016 meeting with Donald Trump, Jr., Paul Manafort, and Jared Kushner -- which remains the most (only?) concrete evidence of attempted collusion between the Trump campaign and the Russian government -- met with the founder of Democratic opposition research firm Fusion GPS on that very same day.  Twice.  Both before and after the truncated and much-discussed Trump Tower confab.  As someone who cut Team Trump very little slack on the Don Jr. emails that preceded their huddle with Natalia Veselnitskaya, the revelations about her schedule on that day strike me as rather suspicious.

Some of Fusion GPS' defenders have argued that the meetings between Veselnitskaya and Glenn Simpson could have been entirely innocent and coincidental, considering that the organization was also working at the time on behalf of a Kremlin project to repeal an American law despised by Vladimir Putin.  Let's set aside the dubious nature of Fusion GPS' simultaneous work (a) with the Russian government and (b) with Christopher Steele, an ex-British spy gathering unverified dirt on Donald Trump, some of which came from high-level Russian sources (and whose research we recently discovered was partially financed by the Clinton campaign and the DNC, despite previous denials).  Is the "unrelated coincidence" explanation still plausible?  It's looking less and less so.  Check out this new Reuters report:

So Fusion GPS wrote the memo that was taken into the Trump Tower meeting which is the same memo presented to Russia's prosecutor general https://t.co/Zs63G9s9D2

The same political research firm that prepared a dossier on Trump campaign ties to Russia had unrelated information on Clinton Foundation donors that a Russian lawyer obtained and offered to President Donald Trump’s eldest son last year, three sources familiar with the matter said...The sources told Reuters that the negative information that Russian lawyer Natalia Veselnitskaya wanted to give to Republican Trump’s campaign at a June 2016 meeting in New York had been dug up by Fusion GPS in an unrelated investigation...In an interview with Bloomberg on Monday, Veselnitskaya said she went to the Trump Tower meeting with Donald Trump Jr., his brother-in-law Jared Kushner, and top campaign adviser Paul Manafort to show them proof of tax evasion by major Democratic donors...The memo had been prepared by Fusion...

If I'm following this correctly, the Democractic firm that was orchestrating the Steele dossier (paid for by Democrats and, for a time, the FBI) about supposed Trump-Russia collusion also dug up some potentially-damaging information against Clinton Foundation donors in the course of conducting a 'totally unrelated' project. And that information just happened to end up in the hands of a Russian envoy who finagled a meeting to hand it over to the Trump campaign -- a transaction that has since been cited as key evidence of Trump-Russia collusion. To quote a certain someone, buying that account as totally coincidental seems to require the willing suspension of disbelief. What does Fusion GPS have to say for itself? C'mon, man:

Glenn Simpson, one of Fusion GPS’ founders, met with Veselnitskaya about that litigation before and after her meeting with Trump Jr., Kushner and Manafort, according to a source familiar with the matter.  However, a source familiar with 10 hours of testimony Simpson gave the Senate Judiciary committee in August said he told investigators he did not know of Veselnitskaya’s Trump Tower meeting until reports of it appeared in the media...Two sources said the Fusion GPS work for Baker and Hostetler that produced the information Veselnitskaya offered Trump Jr. and his associates was unrelated to the firm’s work for Perkins Coie, a law firm that represented the Democratic National Committee and Clinton’s campaign.

Simpson wants people to believe that his company's work on behalf of Russia, and its anti-Trump work on behalf of Democrats, had absolutely nothing to do with each other -- and the fateful crossing of streams at Trump Tower was just a weird accident.  Simpson also reportedly told Congress that he didn't know Ms. Veselnitskaya had met with top-level Trump aides in between his two in-person interactions with her on that exact same day.  He says he was completely in the dark that she'd peddled his firm's research in an effort to collude with the Trump campaign...while his firm was trying to pin collusion on the Trump campaign.  Does that sound pretty ludicrous to you?  It sounds pretty ludicrous to me.

None of this excuses Don Jr.'s apparent enthusiastic willingness to collaborate with Kremlin-linked emissaries, exposed in emails after endless misleading from the campaign and the White House.  The Russians were up to no good, and Trumpworld's hands aren't clean.  But the new context of the Trump Tower meeting, revealed this week, casts the entire episode in a different light.  Suffice it to say that I really, really struggle to take Simpson's preposterous-sounding story at face value.  I suspect I'm not alone.  And while we're discussing the Russia investigation, I'll leave you with this bonkers detail from a new Wall Street Journal story about the investigation into Michael Flynn:

This paragraph raises the single most astonishing question yet about the Trump administration: Was the President’s National Security Adviser planning a kidnapping during the transition? pic.twitter.com/Xs91XAVtbp

Special Counsel Robert Mueller is investigating an alleged plan involving former White House National Security Adviser Mike Flynn to forcibly remove a Muslim cleric living in the U.S. and deliver him to Turkey in return for millions of dollars, according to people familiar with the investigation. Under the alleged proposal, Mr. Flynn and his son, Michael Flynn Jr., were to be paid as much as $15 million for delivering Fethullah Gulen to the Turkish government, according to people with knowledge of discussions Mr. Flynn had with Turkish representatives. President Recep Tayyip Erdogan, who has pressed the U.S. to extradite him, views the cleric as a political enemy...[Flynn] is now facing military, congressional and criminal investigations into allegations that he improperly concealed his financial ties to Turkey and Russia, and into whether the ties played any role in his decisions as the president’s adviser, The Wall Street Journal has previously reported.  One person familiar with the alleged discussions about Mr. Gulen said Mr. Flynn also was prepared to use his influence in the White House to further the legal extradition of the cleric, who lives in Pennsylvania.

Flynn stands accused of hiding payments from at least two foreign governments, including the increasingly dictatorial and thuggish regime in Turkey, whose president's goons beat up anti-Erdogan protesters in the streets of Washington, DC earlier this year. This latest wrinkle suggests that he may have stood to earn millions by facilitating what would have amounted to an 'extraordinary rendition' kidnapping of a dissident cleric living in America, transferring him back to Turkey against his will, at the behest of the regime. And he was reportedly in talks about this scheme during last fall's presidential transition, as he was poised to become the President of the United States' National Security Adviser.  Quite a feat from a man who'd led "lock her up" chants at the Republican National Convention just months earlier.  Great move trusting and hiring this guy, Mr. President.  Only the very best people, etc.