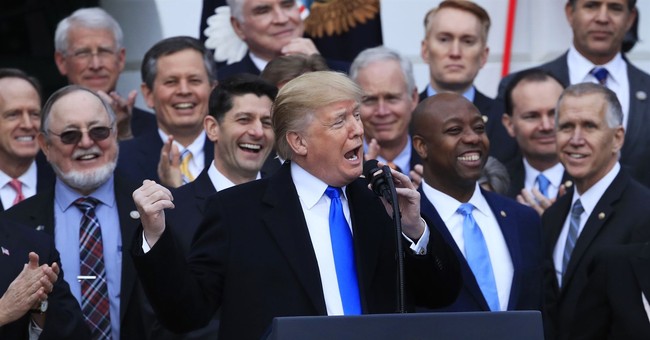 The hits just keep on coming.  I've been covering the Frankenstein fallout since The Worst Piece of Legislation In History passed, and the results continue to shock the conscience.  Matt brought you up to speed on the bonuses and other investments announced by American and Southwest Airlines this week, but they're hardly alone.  Let's survey some of the additional devastation wrought by this Armageddon-style legislative meteor strike: (1) Beefed up bonuses and philanthropy at AFLAC, nationwide:

Effective in 2018, Aflac makes the following commitment to our U.S. workforce: 1. Increase the company’s 401(k) match, from 50% to 100% on the first 4% of employee contribution, while making a one-time contribution of $500 to every employee’s 401(k) plan. 2. Offer certain hospital and accident insurance products to all employees free of charge, as the company currently does with its core cancer insurance product. Aflac expects to increase overall investment in the U.S. by approximately $250 million over three to five years...“We are pleased that these tax reforms provide Aflac with an opportunity to increase our investments in initiatives that reflect our company values; providing for our employees in the long and short term, ensuring future growth for our company and giving back to the community,” Aflac Chairman and CEO Dan Amos said. “We will use these funds to help secure healthy retirements, develop employee skills in an evolving global business climate, and provide additional protections for our workers and their families. At the same time, we will strategically invest in growing our business, while increasing our commitment to children and families facing childhood cancer.”

(2) Bonuses for thousands of Total System Services employees in Georgia:

Total System Services Inc. (NYSE: TSS) is crediting tax reform for cash bonuses going to their team members worldwide. A spokesperson for the Columbus, Ga.-based credit card processor best known as TSYS told Atlanta Business Chronicle that it made an internal announcement Tuesday that team members would receive a "special one-time cash bonus of $1,000" as "a result of the company’s continued success and the recently passed U.S. tax reform legislation." TSYS, which is celebrating its 35th anniversary in 2018, has about 11,500 employees -- a little more than 5,000 of whom are based in Georgia.

(3) Bonuses for manufacturing employees in Oklahoma and Texas:

Workers at Tulsa-based AAON will celebrate the new year with some extra cash. AAON announced Tuesday that people employed by AAON on Jan. 1, 2018, excluding officers, will receive a $1,000 bonus in recognition of the new tax reform law. AAON, which manufactures industrial and commercial HVAC equipment, employs about 2,000 at facilities in Tulsa and Longview, Texas. "We are very appreciative of all AAON employees and want to commemorate the passing of this historic, economy-stimulating tax reform law," AAON CEO Norman H. Asbjornson said in a statement.

(4) Extra cash for supermarket workers in Delaware, whose employer also says the business is in a stronger position to grow:

Delaware Supermarkets Inc. is handing out $150 bonuses to 1,000 non-management and union-represented employees as a result of the recent tax reform bill being signed into law. The bonus is in addition to holiday and performance bonuses. The Wilmington, Delaware-based company, which owns six ShopRite supermarkets in New Castle County, Delaware, will also invest $150,000 into employee training and development programs. The company, locally known as Kenny Family ShopRites, is following in the footsteps of such large corporations as AT&T, Boeing and Comcast. “Our ability to provide bonuses and training to our employees demonstrates the far-reaching implications of this tax reform,” said Christopher Kenny, president and CEO of Delaware Supermarkets. “We have a renewed optimism for the local and the national economy, and this important legislation better positions us for future growth.”

(5) Pay raises and doubling the workforce across multiple states at Nexus Services:

All Nexus Services, Inc. employees will receive a 5% raise, starting in January 2018, CEO Mike Donovan announced today. Also, Nexus unveiled plans to hire another 200 workers over the course of 2018 – doubling the size of Nexus Services, Inc. workforce nationwide. Many of the new jobs will be created in Virginia’s Shenandoah Valley and other jobs will be in San Juan (Puerto Rico), Hackensack (NJ), Ontario (CA) and other sites nationwide...The 5% boost in pay will come on top of the increased take home pay that workers will enjoy due to lower Federal income tax rates for individuals. The more than 200 new jobs Nexus plans to create over the next 12 months will each have a “living wage” and provide full benefits including, health, dental, vision, and retirement plans. A combination of an improved business outlook for 2018 and tax reform by Congress has enabled Nexus Services, Inc. to make these generous changes.

(6) Bonuses and increased wages for non-executives across the more of the banking sector:

-Minneapolis-based U.S. Bancorp today announced a $1,000 bonus for nearly 60,000 employees, a new minimum wage of $15 per hour for all hourly employees and a $150 million contribution to the U.S. Bank Foundation. The company also said it would enhance employee health insurance offerings and pour more money into improving customers’ mobile and digital experiences.

-Dallas-based Comerica also provided a $1,000 bonus for its non-officer employees and boosted its bank-wide minimum wage to $15.

-First Financial Northwest, headquartered in Renton, Wash., said it would pay a $1,000 bonus to all of its non-executive employees.

-Bank of the James, Lynchburg, Va., raised its minimum wage to $15 per hour for employees with more than one year of service, added vacation days and substantially increased its charitable giving plans for 2018.

-First Farmers Bank and Trust in Converse, Ind., said that it would raise its minimum hourly wage by $2.50, provide a 2017 year-end bonus of $750 for all full-time employees, invest at least $250,000 annually in community development activities and spend at least $150,000 per year on employee professional development.

A few more examples are here (bonuses and salary hikes in Utah), here (bonuses and wage boosts in Washington State), and here (minimum wage increase in New Jersey).  In addition to the tax reform's catastrophic impact on American businesses (see above), the new law will also reduce taxes for 80 percent of all US taxpayers, including 91 percent of the middle class.  If any of this surprises you, you've been taken in by the Left's hyperbolic propaganda machine, which was operating in overdrive in a failed effort to kill the bill.