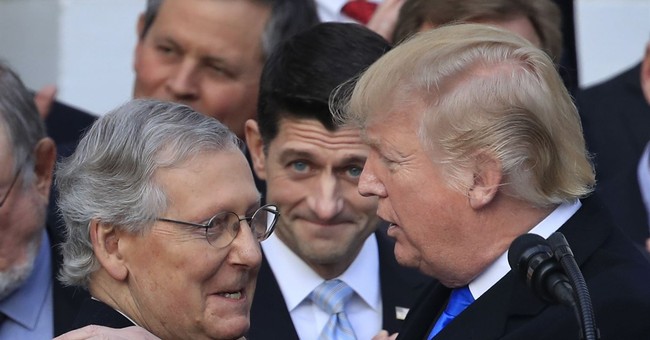 If this destructive misery continues apace, I'm not sure there will be a single American still alive by the end of the holiday season.  You've heard the terrible news about Boeing, Fifth Third Comcast, Wells Fargo, AT&T -- all of which are celebrating passage of the tax reform bill by some combination of paying out bonuses to non-executive employees, expanding their businesses, stepping up charitable investments, and raising their hourly wage.  The Washington Post also chronicles CVS' pledge to hire 3,000 workers into permanent new jobs.  But the devastation doesn't end there.  Texas:

FRANKENSTEIN STRIKES! CEO of Idaho company: "We’re going to have some more dollars to spread around. That money should go to the people who built the company.” Bonuses to employees, averaging $800. https://t.co/VV2fD9VzRQ

More Armageddon: "Associated Bank said Thursday it will boost its minimum hourly wage to $15 and pay workers a $500 bonus when the recently passed federal tax reform is signed."https://t.co/7d0IfMGcvo pic.twitter.com/Zs9JYRG3qn

Royal Hawaiian Heritage Jewelry has been in business for about 40 years. And owner Jackie Breeden is hoping a sweeping tax overhaul approved by Congress and headed to the president's desk will help her expand operations beyond her stores at Pearlridge Center and on Bishop Street, and a single neighbor island outlet in Kona..."I'm from Kauai so I would like to open up a shop back on the island of Kauai and on the west side of Honolulu as well, and be back in Maui. Before we were on all the islands," she said.

Jim Geraghty's post tracking "Armageddon" also notes that elements of the Australian business community are starting to grow concerned about America's newfound global competitiveness, and also highlights a Reuters report that explains why some of the higher-income itemizers in high-tax blue states who are worried about the loss of some state and local tax (SALT) deductibility may have less to fear than they thought.  Why?  Another provision in the reform package will act as a policy counterweight:

The U.S. tax overhaul is a boon to Silicon Valley technology companies like Apple Inc and Alphabet Inc, which will enjoy big tax cuts and the chance to bring back billions of dollars from overseas at a reduced rate. And contrary to the dire warnings of California officials, a large swath of Bay Area workers and their families stand to get a tax break as well, even with new limits on state and local tax deductions. California has the highest state income tax in the nation, and Governor Jerry Brown has called the new tax bill “evil in the extreme”...Nonetheless, many in Silicon Valley stand to benefit. Startup employees, freelancers and venture capital investors are among those who will get new tax benefits or keep those they already have, tax experts said. Even some of the middle- and upper-income professionals who form the core of the technology industry workforce will still get significant tax cuts, while most others will see little change, they said.  The new $10,000 cap on state and local tax deductions will have a less dramatic effect than feared because such deductions in many cases had already been rendered moot by the alternative minimum tax (AMT), a mechanism for assuring that the well-heeled pay at least 26 percent of their income in taxes.

The story quotes a tax professional who sets the record straight: “There is a lot of noise about workers in California, New Jersey, New York and Illinois (facing higher taxes), but 80 percent of our clients there were already paying the alternative minimum tax so they don’t benefit from the state and local deductions,” he said, pointing out that the GOP bill changes the AMT to greatly reduce the people who owe it: "The new law alters the AMT in a way that vastly reduces the number of people who have to pay it, from more than 5 million to an estimated 200,000 next year, according to the Tax Policy Center. The AMT dynamics, combined with reduced overall tax rates and the doubling of the standard deduction to $24,000 should hold most Bay Area tax bills steady."  By the way, Apple and Google -- both mentioned in the Reuters piece -- are infamously liberal bastions.  They are directly benefiting from the tax bill passed by a party they dislike.  Will they follow other big companies' lead by announcing bonuses for employees, higher wages, expanded workforces and other meaningful reinvestments?  I'm sure they're not eager to hand the Trump administration a PR win, but will they at least acknowledge the benefits of the new law?  All we've heard so far is a "vague pledge" to hire more Americans from Apple.  I'll leave you with my upbeat assessment of our national apocalypse:

.@guypbenson: "When you call something Armageddon and the apocalypse, and then 80% of Americans get a tax cut... Armageddon's going pretty well." pic.twitter.com/OSMeThy2sd

How much longer must we endure this torture?