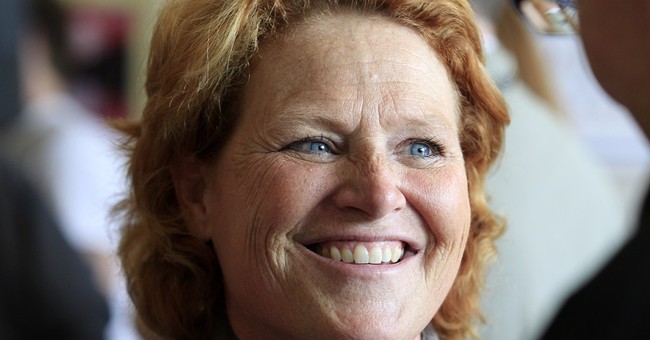 Tax reform is done. It’s about to be law. It’s the largest revamp in three decades, but not a single Democrat voted for it. Not even Democrats from states that Trump won by wide margins. It’s a big gamble for both sides. If it doesn’t produce the economic results the GOP has been pushing, they’re sunk. If it does maintain economic growth, and any patriotic American should hope so (we’re booming at four percent right now), then Democrats have to explain why they voted against the middle class, working families, more money in Americans’ pockets, and just overall relief. Why are you against economic growth? It’s a perfect storm to wreck the Democrats and cast them for what they are: a tax and spend party. One of those who could have been a “yea” vote was North Dakota Democratic Sen. Heidi Heitkamp. She only won her 2012 senate race by 2,994 votes and Trump won her state with 63 percent of the vote in 2016. You’d think she’d be more receptive to this tax plan. Nope. The president did try to bring her into the fold in September. At the time, Heitkamp said she was “curious” about the bill. By the end of November, there was no headway whatsoever:

…after months of Trump individually calling Democratic senators from the Oval Office and his trip to Asia; traveling with Sen. Heidi Heitkamp to her home state of North Dakota to deliver a tax speech; and inviting Heitkamp, along with Democratic Sens. Joe Manchin of West Virginia and Joe Donnelly of Indiana, to the White House for dinner.

Heitkamp has also met with other top White House officials, including Treasury Secretary Steven Mnuchin, and dined with the president’s daughter Ivanka Trump and son-in-law Jared Kushner, both top advisers, at their Kalorama home, said a Heitkamp aide.

But in this hyperpartisan environment, there is little incentive for Democratic lawmakers to help the White House pass any major legislative victory. And policywise, the Senate tax bill offers almost no catnip for them.

This might work for millionaires, but it doesn't work for North Dakota. pic.twitter.com/RP6kbb5r7Q

Yeah, that's not true either, senator; 80 percent of Americans will benefit from this bill. So, maybe she got bad information, or better yet had some shoddy policy analysis when mulling her vote for this tax reform package. On December 2, the North Dakota Democrat blasted out that her constituents’ taxes would go up $10,000 under Republicans. That’s precisely wrong. Americans for Prosperity actually read the report and noted where the senator went wrong. Rob Port, a North Dakota state-based blogger, had their statement, along with the now-deleted tweet from Heitkamp that peddled the lie. Also, North Dakotans would actually see around $2,400 extra in their pockets with this bill:

Heitkamp should have known her charge was ludicrous by looking at the what the $9,900 figure was for other states. For example, the corresponding number for Florida (see page 7) is $1,090,600. In Heitkamp’s interpretation of the data, the average Floridian would face a $1 million tax increase in 2027.

This tax trip up by Heitkamp occurred on December 2—and she has yet to correct her mistake. AFP-ND state director Mike Fedorchak is making sure she doesn’t forget.

“Senator Heitkamp used phony information to defend her “No” vote on the tax reform plan and when she was found out, she failed to correct the record,” he said in a statement. “She is still using exaggerated and conflicting information to mislead North Dakotans into believing they won’t see a tax cut, when they will. Senator Heitkamp is wrong on tax reform and we will be letting North Dakotans know what she’s up to.”

Well, the organization, which promotes free markets and economic freedom, has a new ad to make sure people know what she did, along with educating the people of North Dakota about the benefits of this tax overhaul. Suffice it to say that the first salvo for the 2018 season in North Dakota has been fired.