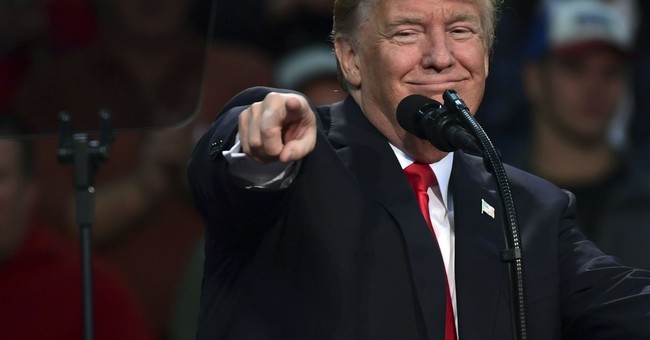 This morning, I ran through the reasons Roy Moore managed to fail as a Republican nominee for federal office in a statewide race in Alabama -- which is truly difficult to pull off.  If you'd prefer not to read the full, brutal analysis, here's the gist: Thousands upon thousands of Republicans in the state decided they couldn't vote for him.  Yes, the Democrats did what they needed to do to make Doug Jones competitive, but as I said on Fox earlier, nothing happens in Alabama politics without GOP voters deciding it should.  And a lot of GOP voters decided that Roy Moore was not worth it:

Let me underscore two things: First, it's impossible to overstate Moore's toxicity with women; his crushing loss to Jones (by 34 points) among mothers is extraordinary and self-explanatory.  Married women with kids generally and reliably vote for Republicans; Roy Moore was a bridge way too far for them.  And second, the stat anchor Bill Hemmer brought up in our discussion about younger voters is also important. This is anecdotal, but there more to it than that:

Deluge of texts & messages from YOUNG conservatives tonight: Deep, near-universal relief that Roy Moore was repudiated with a loss (which should not be confused with support for Jones' views).

Moore-like figures cannot be the future of the party.

In 2012, the last election in which public exit polls were gathered in Alabama, Mitt Romney won young voters (18-29) over Barack Obama by four points.  The youth vote always tends to skew to the left, but Alabama is a very conservative place. As an aside, I'd bet Donald Trump outperformed Romney with young Alabamians, especially because his competition was Hillary Clinton.  Last night, more than 60 percent of voters under the age of 45 sided with Jones over Moore.  Young people saw Moore as a kook and a bigot, and right-leaning young voters recoiled at the thought of Mooreism as the future of the Republican Party.  This resulting repudiation was unmistakable.  And by the way, one more point: Moore's unpalatability to the general electorate was entirely foreseeable.  Sure, the prospect of him actually losing was fairly remote (he was nominated before the sexual molestation allegations arose), but the public record made clear that was not a beloved character in the state.  When Moore ran for chief justice of the state supreme court in 2012 after having been removed from the bench for refusing to respect the rule of law (which then happened again), Moore barely squeaked through in his statewide race; he carried just 52 percent of the vote.  On the same day, the same voters chose Mitt Romney over Barack Obama by 23 points.  That hap was not accidental.

Moore was not a unifying or popular figure among Republicans even before a bunch of women told everyone that he pursued them sexually and romantically when they were in high school and he was in his early to mid-thirties.  Nominating him was a very foolish move, and conservative voters should be very suspicious of the national figures who championed that outcome.  Moving forward, it now appears as though the GOP will face major headwinds in the midterm elections, and that the president's unpopularity isn't just a figment of the 'fake news' imagination.  Trump's approval rating was dead even among last night's electorate in a state he won by nearly 30 points just over a year ago.  Focusing specifically on the Senate, Republicans will now have just a one-vote cushion for the next year, which is a scary prospect.  With the outgoing Bob Corker being spiteful toward the president and liberal Republican Susan Collins potentially going wobbly, Republican leaders will likely try to get tax reform out of conference committee as soon as possible (see update).  The goal is to vote on it prior to Christmas, which would be before Doug Jones is seated (for those calling this illegitimate, the GOP was always shooting to get a tax bill passed before Christmas, and Alabama's official timeline always called for seating the special election winner after the holiday).

As for the Republican Senate majority, it was always going to be quite challenging for Democrats to seize control of the upper chamber in 2018 because the map is slanted so heavily in the GOP's direction.  But Doug Jones' win in Alabama (a seat he'll occupy through the 2020 election) makes the path more plausible.  If Democrats can hold serve in all of the seats they're defending -- still a tall task -- they'll need to net two seats to win back the majority.  The lowest hanging fruit appear to be in Arizona and Nevada, although if Democratic turnout keeps swamping Republican turnout (as we saw not just in 'Bama, but also Virginia), other "safe" seats might be in play.  On the other hand, Democratic incumbents remain very vulnerable in a half-dozen red states carried comfortably by Trump.  And the "moderates" seeking re-election are voting with Chuck Schumer on big ticket items, including against middle class tax cuts, and against extremely well-qualified judicial nominees:

Republicans need to on aggressive offense over these votes, and they need to start early.  Voters in West Virginia and Missouri and North Dakota and Montana and Indiana need to hear about what their "bipartisan" Senators are up to.  Picking off a couple Senate Democrats may be the difference between clinging to a majority (which will at least confirm crucial judicial appointments) and Chuck Schumer grinding the entire GOP agenda to a standstill while blockading all judges. As for Alabama, I'll leave you with this, which made me laugh out loud, then cringe:

Share this on Facebook
Tweet
After Falling Behind at the G7, Biden Calls an Early Lid Back Home
Katie Pavlich
McCarthy: This Is How We Can Hold the CCP Accountable for COVID-19 Pandemic
Julio Rosas