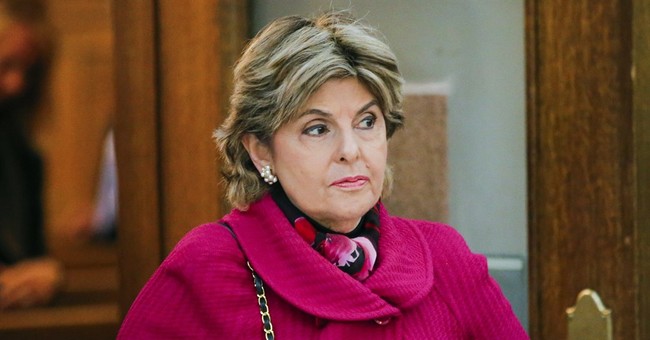 As he contends with falling poll numbers, Republican endorsers jumping ship, and questions about his oddly-worded and incomplete denials, the last thing Roy Moore needs right now is a new accuser stepping forward.  But that is exactly what's about to happen, according to reports.  This development comes with a double shot of bad news, leavened by faint piece of good news.  The bad news for Moore, obviously, is that a fifth woman is entering the fray -- and she'll apparently be the second one to directly allege some form of overtly sexual misconduct at the hands of an adult Moore when she was a teenager:

NEW: Gloria Allred will hold presser today with Alabama woman who alleges Roy Moore sexually assaulted her when she was a minor.

That press conference is scheduled for 2:30pm ET today.  At first, I thought the above tweet was reference to Leigh Corfman, the Alabama woman and self-described Trump voter who told the Washington Post that Moore -- then a 32-year-old prosecutor -- molested her when she was 14.  I found it odd that she'd be lawyering up, with Allred of all people, considering her prior avowals that she never sought the spotlight and only told the truth when journalists came knocking.  It turns out that, no, this is a brand new person we haven't heard from yet.  In no way can that be construed as good news for Moore, but I do suspect that Allred's involvement will reinforce many of his supporters' conviction that this is all a partisan witch hunt cooked up by coastal elitists.  She's a California lawyer known for sidling up to clients who make dramatic allegations against prominent people, including a bevy of Republicans, sometimes shortly before elections.  I cannot imagine she'll resonate as a trustworthy or sympathetic figure in a place like Alabama, so the arrival of the Allred Circus may cause Moore supporters to circle the wagons even tighter.  Then again, despite her reputation for showboating opportunism, she's pretty ruthless and effective; just follow the last few hyperlinks and consider how her targets fared.

Ultimately, the impact of this latest claim will come down to the credibility of the alleged victim.   Is she believable?  Does her story align with the other women's, and does she offer any outside corroboration?  Stay tuned. Meanwhile, I continue to weight the "why now?" counter-argument from Moore and his backers.  It is perhaps his strongest point: I've been a high-profile, hyper-controversial political figure in this state for decades, yet all of this is just dropping on me right now, a few weeks before voters will decide if I join the US Senate?  It's understandable why this timing makes a lot of people awfully suspicious and skeptical, even if it's true that other powerful people achieved big things with heinous, unexposed deeds lurking in their past.  As I've said before, it's impossible to know for certain who is telling the truth, but one important factor about the women quoted by WaPo is that none of them stepped forward on their own volition.  Only after persistent local whispers resulted in journalistic digging which led to reporters knocking on their doors did they decide to share their alleged experiences with Moore.  Another piece of the 'why now, and not sooner?' puzzle involves feared backlash.  Here's how Ms. Corfman anticipated and 'pre-butted' that criticism, explaining why she opted against speaking up in the past:

Corfman, 53, who works as a customer service representative at a payday loan business, says she has voted for Republicans in the past three presidential elections, including for Donald Trump in 2016. She says she thought of confronting Moore personally for years, and almost came forward publicly during his first campaign for state Supreme Court in 2000, but decided against it. Her two children were still in school then and she worried about how it would affect them. She also was concerned that her background — three divorces and a messy financial history — might undermine her credibility. “There is no one here that doesn’t know that I’m not an angel,” Corfman says, referring to her home town of Gadsden. Corfman described her story consistently in six interviews with The Post. The Post confirmed that her mother attended a hearing at the courthouse in February 1979through divorce records. Moore’s office was down the hall from the courtroom. Neither Corfman nor any of the other women sought out The Post.

Some of Moore's defenders have vindicated those worries, almost down to the exact detail.  This widely-shared tweet, for example, was 'liked' by (cough) Donald Trump's eldest son:

Purportedly Moore’s main accuser Leigh Corfman has had three divorces, filed for bankruptcy three times, and has been charged with multiple misdemeanors.

Posts on Moore's FB page indicate that Corfman, has claimed several pastors at various churches made sexual advances at her.

She didn't think she'd be believed, and figured her checkered past would be used as a cudgel against her.  She was right.  One person who does believe her, however, is Senate Majority Leader Mitch McConnell, who said today that Moore should exit the race, and that Republicans are "looking at" a write-in campaign.  In some ways, that plays directly into Moore's hands; he got lots of mileage by portraying his primary opponent as a McConnell puppet, and is already framing his current scandal as the work of a McConnell-aided conspiracy:

The state's Republican governor is swatting down reports that he's angling to delay the special election, but I'd guess he's biding his time.  You'd better believe both parties now have top pollsters in the state assessing the damage and new shifting landscape.  If Moore looks like he's weathering the storm, the panic button will be un-pushed.  If he's collapsing, behind-the-scenes machinations will heat up.  And since we're discussing trusting women who say they've been sexually abused by men (granting that false allegations are a real phenomenon, too, of course), I'll leave you with Bill Clinton's rape accuser demanding that liberals explain why she's never benefitted from the same template afforded to Moore's alleged victims and others:

MSNBC anchor Chris Hayes made an interesting point on that front over the weekend:

Read this account, in light of all we've been hearing and reading this last month, and ask yourself if it's credible. https://t.co/8jymWjFpiF

He couches his critique with requisite signaling of contempt for cynical Republican blame-shift or whatever, but the whole idea behind raising Clinton in the context of the Moore scandal is to highlight to coruscating hypocrisy of liberals who are evincing horror that their partisan opponents would even partially defend a politician accused of serious sexual misconduct.  'What a disgusting thing to do, especially out of tribalistic instinct and political self-interest,' they exclaim.  But Bill Clinton has been the subject of numerous credible accusations from women, including rape.  At every turn, Democrats have rallied around their man, ridiculing the women as crackpots and trailer park trash, while he remains a celebrated star of the party.  It is neither irrelevant nor cynical to genuinely flag and condemn double standards -- so long as one doesn't reflexively adopt the opposite double standard.