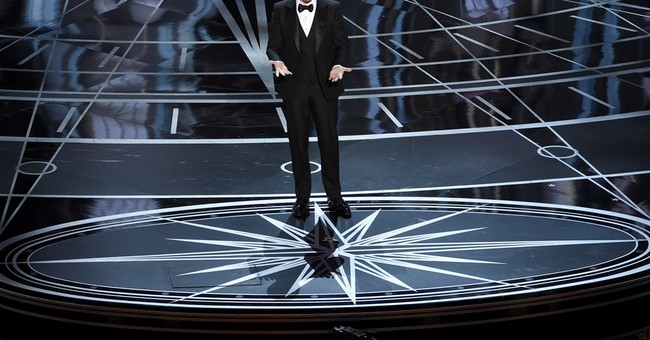 Well, you could have fooled us, Jim.  It really seemed like you were supremely comfortable with serving as the country's self-appointed moral conscience as you agitated against Obamacare repeal (having admitted to never meeting any of the millions who've been harmed by the law) by literally reading Democratic talking points -- all to great media acclaim.  And you appeared mighty fine with scolding Republicans on gun control, smearing Second Amendment advocates as somehow complicit in the Las Vegas massacre.  Given this sobering, complicating reality check from Dianne Feinstein, I was half expecting you to primary her from the left out there in California.  But what's this?  Are you suddenly surrendering your mantle as High Priest of Moral Rectitude and Wokeness all because you're hesitant to go nuclear on your buddy whose grubby fingerprints are all over the industry in which you make your lavish living (and also unwilling women's bodies)?

Kimmel had to be dragged, kicking and screaming into targeting Weinstein by Donald Trump, Jr. -- following two full shows of silence.  Why is this professional comedian (and others) still soft-pedaling the topic?  Is there no ridicule-worthy content in a man whose employment contract basically allowed for sexual harassment, so long as he paid fines to the board, whose members are now feigning terrible shock over his long history predatory abuses?  And who's reportedly planning to challenge his termination as wrongful?  Nothing to skewer here, amirite, Jimmer?

Kate Beckinsale: I avoided Harvey Weinstein come ons when I was 17 by saying I 'had school in the morning' https://t.co/xXpWEO4G7T

Got it.  The whole "truth to power" thing is only exhilarating when the "right" sort of people are in your crosshairs.  The other angle here is perhaps Kimmel knows there more where this came from:

More gems from #Kimmel.
Here he has women feel his crotch to guess what he stuffed in his pants.
KIMMEL: "You should put your mouth on it" pic.twitter.com/Yv0MVN9vPw

Daniel Foster jokes (I think?), "when will the Juggies speak out?"  I'll leave you with one of Kimmel's actually amusing bits -- slightly funnier than "call your Senator!" hectoring -- in which his crew adds needless but entertaining censorship to media clips.  This installment features yours truly:

In which I'm bleeped in one of Pope Kimmel's actually funny bits, 'This Week in Unnecessary Censorship:' https://t.co/KXx5uDuJDn pic.twitter.com/Gf0OyZulzs