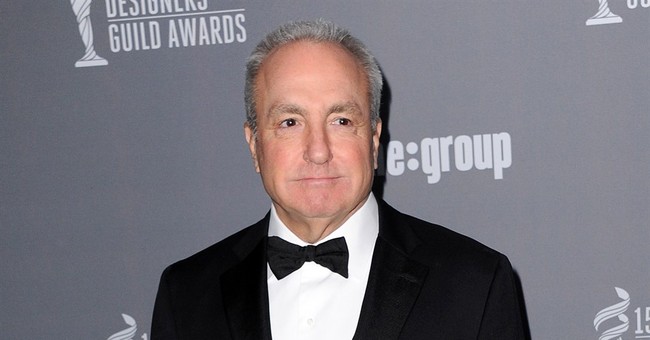 According to a report in the New York Times, producers at Saturday Night Live nixed jokes aimed at Hollywood giant Harvey Weinstein, who was fired by his own company in the midst of a sexual harassment scandal.  Most late night talk show hosts scrupulously avoided this joke-rich subject for two nights last week, as revelations of Weinsten's decades-long pattern of conduct spilled into the public eye.  Critics noted that these programs showed no such hesitancy to utterly skewer right-leaning figures over similar behavior.  Would NBC's iconic weekend comedy program take aim at an exceptionally powerful and influential figure in the entertainment world, who also shares the show's overall political bent?  Evidently not.  And thus, a great deal of, er, fertile ground for public ridicule went untilled on Saturday's broadcast:

The downfall of Harvey Weinstein would seem like obvious grist for TV’s late-night comedy shows. Mr. Weinstein was facing three decades’ worth of allegations that he sexually harassed women; on Sunday, his own film studio fired him. The story seemed to parallel those of other powerful men who were confronted with numerous accounts of sexual misdeeds, including Bill O’Reilly, Roger Ailes and President Trump — all of whom were widely pilloried in the monologues of the late-night hosts and on shows like “Saturday Night Live.” Yet since Thursday, when The New York Times published an investigation into the history of complaints against Mr. Weinstein, most of the late-night shows have avoided the matter altogether...

The omission of Mr. Weinstein seemed especially glaring on this weekend’s installment of “Saturday Night Live,” a show with a history of responding rapidly to news events and which, in a 90-minute broadcast, has multiple opportunities to address a range of topics. As it turns out, the show did have jokes about Mr. Weinstein ready — they just weren’t used, according to a person familiar with how Saturday’s episode was prepared...[conservative] criticism was hardly alleviated by remarks made early Sunday morning by Lorne Michaels, the creator and executive producer of “S.N.L.” Speaking to a videographer for The Daily Mail who noted that the show had made no mention of Mr. Weinstein, Mr. Michaels said, “It’s a New York thing.”

You know who else is from New York? Bill O'Reilly. Oh, and someone else:

Out of curiosity where is @realdonaldtrump from??? Seems like there could be more to that pass than this nonsense. https://t.co/N01MLZA0Wa

Strangely, those New Yorkers weren't granted a reprieve from SNL's unsparing treatment thanks to "the New York thing."  Gosh, I wonder why.  Could it be that this calculation had everything to do with the intersection of self preservation and politics, and nothing to do with geographic solidarity?  Just spitballing here.  It very much looks like Weinstein's bubble of protection is still at least partially intact.  He's been counting on the media's fear, sympathy and intimidation for years:

New York magazine had the Harvey Weinstein story a year ago — but "Harvey had it killed," a source tells @PageSix https://t.co/TgQOasxoum

This is how someone gets away with so much, for so long:

Of course people knew about Harvey Weinstein. Like the New York Times, for instance. Sharon Waxman, a former reporter at the Times, writes in The Wrap how she had the story on Weinstein in 2004—and then he bullied the Times into dropping it. Matt Damon and Russell Crowe even called her directly to get her to back off the story. And Miramax was a major advertiser. Her editor at the Times, Jonathan Landman, asked her why it mattered. After all, he told Waxman, “he’s not a publicly elected official.” Manhattan’s district attorney knew, too. In 2015, Weinstein’s lawyer donated $10,000 to the campaign of Manhattan district attorney Cyrus Vance after he declined to file sexual assault charges against the producer. Given the number of stories that have circulated for so long, Weinstein must have spread millions around New York, Los Angeles, and Europe to pay off lawyers and buy silence, including the silence of his victims.

Nothing to see here, folks -- and certainly nothing to mock or joke about.  Meanwhile, SNL did manage join its comedy brethren in pushing for gun control, although they stopped well short of embracing Pope Kimmel's smeary declaration that gun rights advocates share responsibility for the shooter's heinous, premeditated acts -- which even Dianne Feinstein admits could not have been prevented by the passage of a law.  I'll leave you with the best part of the latest episode of SNL: The show's post-Vegas 'cold open.'  It featured country music star Jason Aldean, whose concert was marred by unspeakable violence the previous weekend.  Aldean delivered an apolitical monologue on unity and the American spirit, then performed Tom Petty's "Won't Back Down," a fitting tribute to the rock legend who died last week.  Well done: