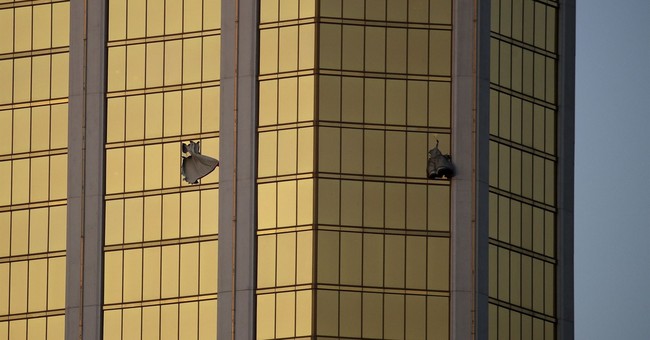 In the aftermath of any mass shooting -- and, grotesquely, there are many from which to choose -- our national conversation is almost immediately polluted by all-consuming political demagoguery, often before the facts of the case are established.  We've developed a post-shooting playbook, under which millions of Americans rush to ideological battle stations to rage at each other, long before they've completed the human process of grappling with heartsickness.  It should go without saying that citizens of all political stripes and backgrounds are horrified by the senseless and tragic loss of life -- yet it must be said, because the Left's portion of the playbook involves questioning, denigrating, or even denying the authenticity of others' grief.  In sane, normal, wonderful America, people channel their shock and grief by queuing up to give blood, offering up prayers for the wounded and the grieving, or contributing to GoFundMe accounts earmarked for the families of the slain and survivors.  In hyper-partisan America, combatants funnel their anger at each other.

We are still learning the horrific (and, quite frankly, extremely bizarre) details of what happened in Las Vegas, the site of the deadliest shooting massacre in modern American history.  Funeral arrangements are being attended to.  Gunshot wounds are being treated.  Loved ones are grappling with their shattered new realities.  And, sure enough, some on the Left are back to their shrill, shameless moral bullying, under which people who do not embrace their policy preferences as an efficacious response to the horror are cast as self-interested cynics, unfeeling and brainwashed right-wing droids, or even accessories to murder.  Connecticut Senator Chris Murphy, whose genuine and natural outrage over the murder of innocents often leads him to say ugly things about those who disagree with his political prescriptions, quickly revisited the well-worn trope that his Congressional colleagues who hold differing views are "cowardly:"

To my colleagues: your cowardice to act cannot be whitewashed by thoughts and prayers.

None of this ends unless we do something to stop it.

It couldn't possibly be that they simply hold their own deeply-held principles and views of the constitution that don't align with Murphy's.  Or that they campaigned as Second Amendment defenders, and feel an obligation to honor fundamental promises to the people who elected them.  No, they must be "scared" of crossing the NRA and its (relatively paltry) "blood money."  This is the worst kind of motive-impugning nastiness that directly harms our ability to debate important challenges, let alone resolve them.  But cheap intellectual shortcuts (our opponents secretly agree with us, but are cowering to special interests) are simpler to rationalize than harder truths (our opponents' firmly-rooted convictions about this issue are largely irreconcilable with our own firmly-rooted convictions).  After he was literally shot at by a radical leftist at a Congressional baseball practice several months ago, Republican Congressman Mo Brooks was asked by reporters whether the attempted mass assassination had changed his mind on gun rights.  The creepy premise of this question, asked shortly after the shooting, was essentially, did this deranged nut's efforts to murder you persuade you to adopt his views?  Brooks' response:

"The Second Amendment right to bear arms is to ensure that we always have a republic. And as with any other constitutional provision in the Bill of Rights, there are adverse aspects to each of those rights that we enjoy as people. And what we just saw here is one of the bad side effects of someone not exercising those rights properly...We're not going to get rid of freedom of speech because some people say some really ugly things that hurt other people's feelings. We're not going to get rid of Fourth Amendment search and seizure rights because it allows some criminals to go free who should be behind bars. These rights are there to protect Americans, and while each of them has a negative aspect to them, they are fundamental to our being the greatest nation in world history."

Is Mo Brooks a "coward," Senator? How about Steve Scalise, who remains a steadfast supporter of the Second Amendment as he re-learns how to walk?  Or the pro-gun combat medic who saved Scalise's life by slowing the bleeding before first responders arrived that morning?  If that's really what you think of them, feel free to smear them to their faces, rather than blasting out preening missives via smart phone, signaling your indignation and exquisite virtue to masses of head-nodding followers.  If conservatives wanted to use Murphy's shabby approach against him, we might question whether he privately relishes mass shootings because they offer exploitable opportunities to raise his political profile and ingratiate himself to his party's national grassroots.  We should resist the temptation toward in-kind slander, however, because jumping into an arms race of motive-impugning is debasing and soulless.  Murphy's overwhelming reaction to news of a homicidal slaughter is one of revulsion -- just as ours is.  We all share that.  Not to be outdone by Murphy, the Speaker of California's left-wing legislative assembly flat-out accused gun rights advocates and pro-gun Republican political figures of complicity:

California Assembly speaker says shooter didn't act alone: "Every gun lobbyist and the politicians who do their bidding were all in that room with him." https://t.co/qHxxtpvl5E

This is disgusting.  Bernie Sanders did not help his former campaign volunteer pull the trigger as he mowed down Congressional Republicans at a public park (long gone are the Left's calls for unity and restraint after that harrowing episode).  MSNBC's Rachel Maddow didn't drive the getaway car after a fan of hers murdered young Muslims in North Carolina.  And the next time ISIS strikes in a Western city, liberal politicians criticized by some conservatives as "soft" on radical Islamism will not have served as de facto 'co-conspirators' in the vicious plot.  Shame on Anthony Rendon. His rhetoric isn't merely mean-spirited; it deliberately tears the nation apart in emotionally fraught moments that call for collective solemnity and sadness (this sentence too often applies to our president, as well).  And for what?  For politics.  This brand of despicable finger-pointing is not meant to persuade; just the opposite.  It's meant to deepen our increasingly-intractable cultural feuds that further foreclose our capacity for rationality and compromise.  That might make for effective politics from the perspective of a very liberal politician from a very liberal area, but to the rest of us -- including those of us who aren't reflexively "gun people" -- it sounds a lot like an equally-poisonous strain of Roy Moore-ism.  A form of knee-jerk, intolerant Leftist theocracy.  I'll leave you with a reminder of why conservatives are so often justified in their mistrust of the media, especially on hot button issues on which the overwhelming majority of journalists side with Democrats:

Been a journo for a while now. It has become impossible to report just, "facts" about gun violence. The fact is America needs gun control.

That's not how 'facts' work.  And it's not how journalism is supposed to work, either.  In this toxic political environment, and in the face of such inexplicable suffering and anguish, it's difficult to guard against demoralization.  My inclination is to say 'Lord help us,' but that would risk touching off a cascade of 'your prayers aren't enough, coward' sneering and scolding.  So, Lord help us.  We need it.