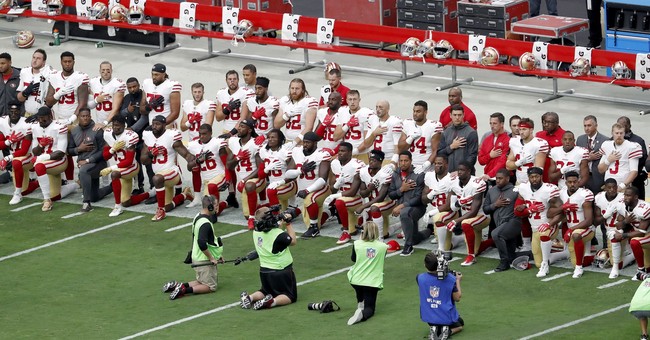 The anger many fans feel toward football players protesting the national anthem will probably not subside as quickly as the NFL hopes.

As Katie reported last week, the NFL’s favorability took a huge hit, dropping by 13 percent in just one week. And now, a new poll found that a majority of fans plan to watch less pro football as a result of the anthem controversy.

According to a Yahoo Finance survey, nearly 62 percent of respondents said they plan to tune in to fewer NFL games because of the protests. But that’s not all—36 percent said they will buy less NFL merchandise, and 32 percent said they’ve chosen not to go to a game that they normally would have attended. The findings show that fans are hitting the league's bottom line.

In our survey, we wanted to suss out whether the anthem flap could deal a lasting financial hit to the NFL. The answers suggest it could. When we asked fans if the controversy would make them more or less supportive of the NFL, 71% said less and only 15% said more. Of those who said they are now less supportive, 74% said their change of heart was permanent, and only 3% said they felt it was temporary. Public attitudes are fickle, and it’s entirely possible boredom with the issue — or terrifically exciting football — could make people forget before long. The NFL, after all, has faced other disturbing issues that didn’t seem to dent its popularity. (Yahoo Finance)

The survey of 9,056 NFL fans was conducted online through SurveyMonkey from Sept. 28-29. Yahoo only counted responses from people who watched one or more games per week and described themselves as pro football fans.