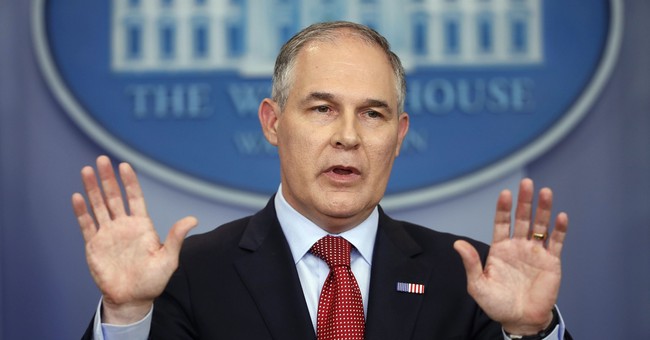 I've been pretty tough on Health and Human Services Secretary Tom Price in light of revelations surrounding his extremely costly, unnecessary, and unjustifiable use of private jets for official business.  Conservatives who believe in government thrift and respecting taxpayer dollars shouldn't defend Price's glaring error in judgment; the president certainly isn't, publicly rebuking his cabinet secretary yesterday and declining to foreclose the possibility of firing him.  Real Clear Politics' Tom Bevan speculated on Bret Baier's panel last night that even if Trump were inclined to sack Price, he probably wouldn't want to do it amid his administration's major rollout of tax reform, so perhaps Price will be quietly shown the door somewhere down the road.  For his part, Price says he believes he maintains the president's full confidence.  As Trump himself said to reporters yesterday, "we'll see."  But some on the Left and in the press are piggybacking off of this controversy to target other senior Trump administrations official over supposedly questionable use of private jets.  We explained why tweets and headlines like this about Education Secretary Betsy DeVos were misleading:

Sec. DeVos -- who is independently wealthy and who should be commended for tackling a thorny issue to address injustice -- pays for that travel out of her own pocket.  There is nothing ethically problematic about that whatsoever.  Then there's the kerfuffle over flights taken by EPA administrator and liberal bete noir Scott Pruitt.  Did he 'do the same thing' as Price?  Nope.  Fox News' John Roberts explains the relevant details and distinctions.  Specifics matter:

All of this started with HHH Secretary Tom Price and if the revelation that he spent $400,000 on private flights. Now people are talking about the EPA Administrator Scott Pruitt taking a number of noncommercial flights. A source tells me it was four flights in total. The only charter flight was one between Denver, Colorado and Duragno. This was after the commercial flight on United Airlines that the Administrator was booked on, was delayed for eight hours and he would have missed this event in a mine had they not chartered the flight.  They also asked the Governor of Colorado if they could jump on his plane. They were initially told there was no room. And then after they chartered the aircraft, the Governor said well we've got one seat, which still wouldn’t have been any good.  The Administrator could’ve flown but his staff wouldn’t have.  The other flights were government flights. One was a military flight from Cincinnati to JFK so the Administrator could jump a commercial flight to Italy … so that he attend the G7 Summit...All of that was cleared by the EPA office of ethics. So they're saying this is not a Tom Price situation, this is completely different.

If this explanation checks out, the Pruitt stuff is a non-story. Public officials hopping on government or military planes is a commonplace and bipartisan practice. And the only private charter was a last-minute booking resulting from a lengthy commercial airline delay that would have prevented the EPA administrator from attending an event.  So, apples and oranges from the Price situation.  Speaking of which, I'll leave you with a Republican Senator notably refusing to offer any spin on the HHS Secretary's behalf: