Ouch: Trump is Not Happy With One of His Top Appointees 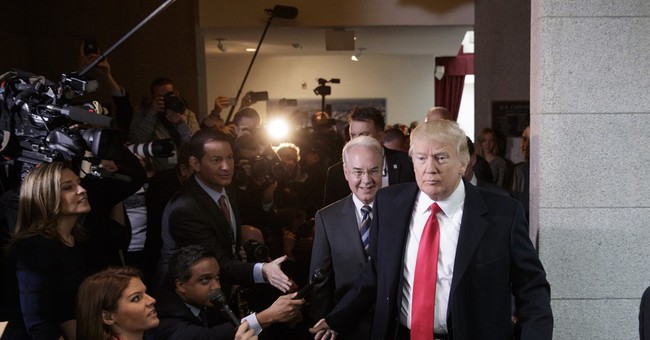 Last week, I argued that conservatives shouldn't attempt to defend HHS Secretary Tom Price's habitual and unjustifiable use of expensive private jets to attend events around the country.  It was a painful piece to write, in light of my respect for Price as a member of Congress, whose inclusion in the Trump administration I praised to the hilt.  But if we'd have raised holy hell over an Obama administration official's precedent-breaking abuse of public dollars (and we would have), we must hold "our" side accountable, too -- especially because fiscal conservatives like Price purport to respect taxpayers and shun government waste.  (Cough).  Well, the story appears to have gotten uglier, at least in terms of optics:

Health and Human Services Secretary Tom Price took a government-funded private jet in August to get to St. Simons Island, an exclusive Georgia resort where he and his wife own land, a day and a half before he addressed a group of local doctors at a medical conference that he and his wife have long attended. The St. Simons Island trip was one of two taxpayer-funded flights on private jets in which Price traveled to places where he owns property, and paired official visits with meetings with longtime colleagues and family members...The plane arrived in Brunswick at 4:02 p.m. the afternoon before the start of the two-day Medical Association of Georgia retreat and roughly 40 hours before Price addressed the group, according to airport records and people familiar with the event. At about the same time, there were connecting commercial flights from Raleigh to Brunswick via Atlanta that would have gotten Price to St. Simons Island that evening...On June 6, HHS chartered a jet to fly Price to Nashville, Tennessee, where he owns a condominium and where his son resides. Price toured a medicine dispensary and spoke to a local health summit organized by a longtime friend. He also had lunch with his son, an HHS official confirmed.

I don't have a huge problem with government officials doubling-up to visit with friends or family while on official business -- who among us hasn't mixed a little pleasure into a work trip from time to time? -- but Price's foolish, unforced error makes it all look worse.  These trips were on our dime, and Price needlessly used an exorbitantly expensive mode of travel as he hopped from spot to spot, dining with family members and checking in on property he owns along the way.  It just doesn't sit right.  Now that he's been called out on it, Price has suspended his private jet travel, pending "a review."  The boss isn't pleased:

When you campaign on a populist "drain the swamp" message, these sorts of headlines aren't particularly helpful to the cause.  And on the heels of another giant whiff on Obamacare repeal, might Price suddenly look a lot more dispensable these days?  Yikes:

Price had been seen in WH as weathering this till now, but admin officials tell me it's not clear how much longer https://t.co/1qMZvcOikg

In the clip above, Trump is asked if he's considering cutting Price loose.  No denial.  Who might hypothetically replace a potentially-outgoing HHS Secretary?  Allahpundit has an interesting thought.