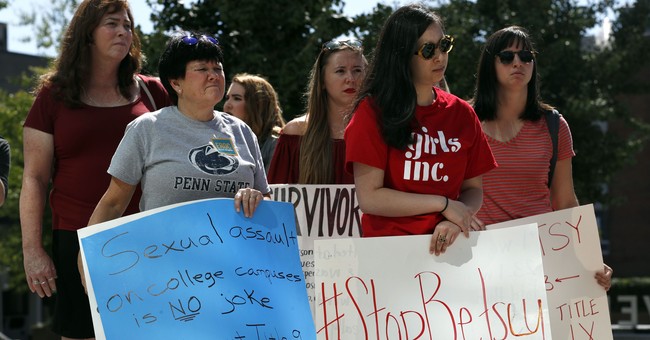 Matt wrote about this controversy yesterday, but given the sheer volume of hysterical outrage generated by the Trump administration's potential policy shift, it merits additional scrutiny.  To hear critics tell it, Education Secretary Betsy DeVos practically legalized rape on college campuses last week.  She did nothing of the sort, of course.  One of the loudest voices in the chorus of ignorant or manipulative opprobrium was rumored presidential hopeful, California Senator Kamala Harris.  In spite of her background as a prosecutor, and her former role as her state's Attorney General, Harris evinces an extremely politicized view of the law  -- especially on hot button issues like illegal immigration, religious freedom, and this one:

Survivors of sexual assault deserve to be believed, not blamed.https://t.co/zC0cdm1EbJ

Restoring core due process protections to sexual assault investigations does not constitute "blaming" victims.  It constitutes the pursuit of justice.  It's alarming that fundamental, bedrock elements of our criminal justice system need to be explained to so many people -- including sitting Senators -- but Charles C.W. Cooke takes a crack at it here:

“Kamala Harris killed someone. She needs punishing.”
“Shouldn’t we find out if that’s true first?”
“Why are you defending a murderer?”

This is the brand of demagoguery that anti-authoritarians are up against.  Why are some people so allergic to these sentiments, which should be easily understood and appreciated?

Accuser does not necessarily equal survivor. How is this such a difficult concept to grasp? https://t.co/BBGfmwaEUY

This is elementary-level stuff, yet those who favor a fair, robust and careful legal process for adjudicating sexual crimes on campus are routinely accused of "siding with rapists."  David French's excellent recent essay addresses this mentality -- which betrays core tenets of the US criminal justice system, embraces profoundly misleading statistics (George Will has done yeoman's work on this subject), and ignores other relevant factors:

Why do some activists seemingly come unglued at the mere mention of “due process”? To put it simply, it’s because many of them believe and propagate a pile of junk science seasoned with a heaping helping of far-left ideology. This toxic combination causes them to believe the following fantastical story: That one in five women on campus will be sexually assaulted at some point in their college careers, that virtually no woman would lie or be mistaken in alleging a sexual assault, and that even the absence of evidence is somehow evidence of rape. In these circumstances, due process is at best a mere formality. At worst, it’s the rapist’s friend. But that story is wrong — terribly wrong — and it’s facilitating injustice on a national scale...

The one-in-five statistic is based on seriously flawed studies that, among other things, improperly define sexual assault or base their findings on a low-response survey of two colleges. In fact, the authors of arguably the most influential source for the one-in-five statistic have explicitly said that it was “inappropriate” to use their survey as a “baseline” for campus rape. In 2014, the Department of Justice’s Bureau of Justice Statistics released its own, more rigorous survey, and its results were far, far different. It found that the rate of rape and sexual assault was “higher for nonstudents than for students.” The annual rate of sexual assault for young women enrolled in college was 6.1 per 1,000, or less than 1 percent. Too high, but far from the extraordinary and shocking crisis of one-in-five, even when tallied over multiple years.

Read the entire thing.  It should go without saying that no amount of sexual assault is acceptable, but if we're talking about "epidemics" and using that hyperbole to justify end-runs around the constitution, actual facts should matter. Matt linked to some of Robby Soave's important work at Reason exposing a number of the very worst abuses of the Obama-affirmed era of Kangaroo Courts.  These aren't fictional hypotheticals; they're outrageous accounts of genuine injustices.  This instance is especially appalling:

"The couple [an athlete and his girlfriend] was described as 'playfully roughhousing,' but a witness thought otherwise and the incident was reported to the university's Title IX coordinator. The young woman repeatedly assured campus officials she had not been abused nor had any misconduct occurred. But because of the failed system, university administrators told her they knew better. They dismissed the young man, her boyfriend, from the football team and expelled him from school. 'When I told the truth,' the young woman said, 'I was stereotyped and was told I must be a 'battered' woman, and that made me feel demeaned and absurdly profiled.'"

The DeVos approach to revamping the status quo requires citizens to be able to hold several thoughts in their heads at the same time: (1) Sexual assault is an evil abomination that must be prevented, actively discouraged, and harshly punished.  Granted, it can be difficult to prove, and survivors are sometimes traumatized or reluctant to come forward, complicating the important work of holding perpetrators accountable.  (2) Due process for the accused party is a central and essential part of the "innocent until proven guilty" assumption upon which our system rests.  This is true even when, or especially when, the accused party is heinous.  (3) Allegations from victims are often true and ought to be taken extremely seriously by authorities.  But sometimes they are untrue, and can ruin innocent people's lives, another grave injustice.  Fortunately, reason has not been abandoned in all center-left quarters, as it relates to these matters:

Even the WaPo ed board praises DeVos, calling her speech "right on target" https://t.co/89WiHG0s31

Legitimate questions have been raised about whether there was an overreach by the Obama administration in its prescriptions that resulted in imbalances and injustices. Ms. DeVos, while crediting the Obama administration for bringing the issue of campus sexual assaults “into the light of day,” blasted the current system as failing both victims and the accused and being too onerous for administrators...Advocates for survivors of sexual violence seized on her criticism — in particular her concern about the need for due process for the accused — as a betrayal that backtracks on protections for victims. But Ms. DeVos was unequivocal in stating that there must be no tolerance for sexual misconduct and that universities and colleges have a responsibility to combat it. She is not alone in seeing some problems with how the guidelines have been implemented, as she illustrated with stories from students — both survivors and those accused — about how the system failed them. In a detailed examination, the Atlantic’s Emily Yoffe argued that many remedies pushed on campuses “are unjust to men, infantilize women, and ultimately undermine the legitimacy of the fight against sexual violence.” Groups such as the American Association of University Professors and the American College of Trial Lawyers have called for changes in the standard of proof used in campus disciplinary proceedings.

Here's the strong Atlantic piece to which the Washington Post's editors refer. These are complex, difficult issues, for reasons that should be obvious. Public policy should reflect the seriousness of the crimes involved without undermining the rule of law. It's vital that policymakers are able to examine and address inadequacies or over-corrections vis-a-vis sexual crimes on college campuses without being mindlessly demonized. As we've argued repeatedly (including in End of Discussion) the outrage mob often prevents thoughtful public discourse -- which makes solving real, tough problems that much harder.  Victims and the wrongfully-accused deserve better.