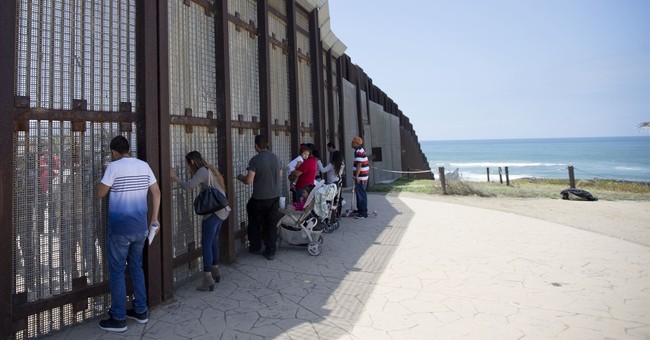 When President Trump canceled his predecessor's legally-dubious 'DACA' amnesty-by-fiat, he charged Congress with the task of resolving the issue within six months.  We know that Democrats, and some hardcore activists, would prefer a "clean" bill that granted permanent deportation relief to eligible DREAMers -- with no immigration enforcement provisions attached.  But Republican leaders have made clear that any DREAM Act-style legislation must entail upgraded security elements, with some key Democrats signaling that they might be open to a compromise.  Democrats' line in the sand is funding for "the wall," and the White House appears prepared to accommodate that demand.  In light of those facts, the proposal I've floated involves drawing from the failed, Democrat-led 2013 'Gang of Eight' bill to identify immigration enforcement proposals that have already gotten unanimous stamps of approval from Senate Democrats.  Among them are the hiring of thousands of new border agents, the construction of 700 miles of new fencing, and upgrading the e-verify system for hiring new employees.

The idea, therefore, would be pretty straightforward: Law-abiding DREAMers' non-deportable status would be formalized and stabilized, while Americans concerned about border and internal immigration enforcement would see tangible progress on the security front.  I argued that would be a fair deal, and would be broadly popular.  A new Washington Post/ABC News poll confirms the latter piece of my analysis:

Americans overwhelmingly support an equitable resolution for DREAMers, and by nearly a 40-point margin, they're willing to couple that legislative goal with "more border security."  Stepping up efforts to require employers to verify a potential hire's immigration status is roughly an 80/20 issue.  As you can see, Trump's proposals to "build the wall" and to slash legal immigration in half (easily the least popular component of the RAISE Act, other parts of which enjoy wide support) are underwater.  Trump's smartest play would be to pick the most popular bits of the 'Gang of Eight's' enforcement provisions and make those his demands.  If he gets a combination of increased border surveillance, new agents, hundreds of miles of fencing, and plus enhanced e-verify "in exchange for" treating the DREAMers "with heart," he could easily claim victory all around.  He'd notch wins on improved security, and on building a border barrier (he could even call it "the wall") -- plus, he could frame any upgrades to the uber-popular e-verify system as protecting American workers.  Those changes would reflect multiple commitments he repeatedly made on the campaign trail.  Meanwhile, two Senate conservatives have introduced their version of the DREAM Act, which would offer an extended path to citizenship for up to 2.5 million potential DACA recipients:

[U]nlike other merit-based immigration proposals that limit new immigrants from entering the country based on their job skills, this proposal would limit who can remain in the country based on their years of American education, work experience or military service…All applicants will have to pass a medical examination and be “extreme vetted.” The vetting will include three separate rounds of security and background checks to ensure they have no criminal history and pose no national security threat. The first check would happen when the immigrant enters the program followed by a second check after five years. The third check comes after 15 years, if and when the immigrant applies to become a citizen…The proposal would grant high school graduates without a serious criminal record conditional immigration status for a five-year period. During that time, if they earn a higher-education degree, serve in the military or stay employed, they could apply for permanent residency and, eventually, citizenship.

Allahpundit summarizes the proposed vetting process: "You get five years of legal status to prove that you can hold down a job, get your college degree, or enlist. Do one of the three and you’re eligible for permanent residency. Keep your nose clean and, 10 years after that, you can become a citizen. That’s the Tillis/Lankford timeframe, anyway; Democrats will insist on something more accelerated. I assume we’ll end up with an eight- to 10-year citizenship path if this were to become law,"  he writes.   One thing that's nowhere to be found in the Tillis/Lankford plan?  New border security measures, though its co-sponsors say those are essential:

Tillis said it was clear that the Dream Act did not have enough support to pass the Senate and the House. Lankford said the Succeed Act is not a standalone bill and would require companion legislation, particularly around border security. Lankford said Trump “was very supportive of the concept” of the legislation. That’s a non-starter for some immigration activists. “We demand that Paul Ryan and Mitch McConnell immediately allow for a vote on a clean Dream Act, without trying to use us as bargaining chips for more money for out-of-control border control and immigration enforcement,” said Make the Road New York.

Well, "immigration activists" don't control the US Congress, do they?  Their so-called 'demands' should be ignored.  For conservatives to even consider a plan like the one put forth by Tillis and Lankford, simultaneous enforcement is a pre-requisite.  A failure to address and mitigate the problem of illegal immigration would and should be the true "non-starter" in this negotiation.