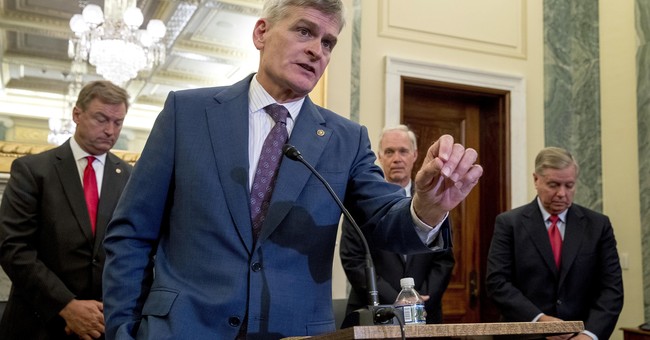 A follow-up to Leah's post on the Graham-Cassidy bill we've been telling you about over the last week or so: As we noted earlier, Mitch McConnell reportedly told the co-sponsors of this last-ditch legislative push to whip the votes themselves and get back to him if and when they get to 50.  If they're able to meet or surpass that elusive threshold, McConnell said he'd call a vote, and under reconciliation rules, Vice President Pence could break the tie and pass the bill.  But as GOP leaders know all too well, it only takes three dissenting members of the majority caucus to defect and join united Democrats in killing off the legislation.  The Washington Examiner reports that as things stand today, despite the odds and the challenging time crunch, Graham-Cassidy faces a "non zero" chance of passage:

While still an uphill climb, there’s now a non-zero chance of something passing. Cassidy said Friday that more senators have told him they support his proposal to overhaul Obamacare, bringing the total to as many as 49 votes. Whether this is true or a typical lawmaker exaggeration in the midst of boosting his legislation, a spokesman for conservative Sen. Mike Lee told Daily on Healthcare he was “encouraged” by the latest Obamacare bill because it provided flexibility to states to get around several key Obamacare regulations. Though Lee isn’t fully a “yes” yet, he is at least receptive and is working on some tweaks to the language about state regulatory waivers. The spokesman described the tweaks as “technical” in nature, and not substantive changes that could broaden the waivers in such a way that it would be more likely to scare off centrists. Getting Lee on board would be a huge coup for supporters of the bill, because it was the Utah senator’s opposition that helped kill an earlier proposed healthcare compromise.

Lee would be a good get of course, but if Rand Paul is a hard no, the potential margin for error remains paper thin. Let's say John McCain decides to back his pal Lindsey Graham's proposal, to which he's apparently open. Unless Lisa Murkowski and/or Susan Collins also sign on, supporters would simply replace McCain's "no" with Paul's. That math doesn't work. But Cassidy's camp must believe that there's at least a path to getting there, based on this comment:

Asked whether the path to 50 still existed without his support, a senior aide for Cassidy replied, "We believe so based on the conversations we've had." Cassidy told reporters that Graham is in conversations with the administration about supporting the bill. "We think the president will be on board," he said.

Does Collins' previous work with Cassidy on a somewhat similar plan put her realistically in play?  Stay tuned.  Despite adopting a hands-off approach on this bill, McConnell has requested an expedited CBO score of the legislation, which could prove critical.  Meanwhile, Ed Morrissey examines Sen. Paul's stated opposition to Graham-Cassidy and comes away asking some questions:

Wouldn’t a devolution of ObamaCare to the states, as Graham-Cassidy supposedly accomplishes, still be an improvement over the current status quo? ...There are two problems with [Paul's suggestion of] clean repeal. One, Republicans from Donald Trump down promised a replacement along with a repeal. That by the way includes one Republican named Rand Paul. Second, Paul got the vote he wanted on clean repeal, and lost 45/54. It’s not going to happen, as much as it should happen, and perhaps his time might be better spent trying to work on a compromise.

Instead, he's taking potshots at Graham-Cassidy with at least one Democrat-assisting talking point -- effectively aiding and abetting the party that whose leading Senate lights have just actively embraced a disastrous and comprehensively unaffordable single-payer healthcare regime. If Republicans are serious about improving the failing status quo and preventing a total government takeover, they'd be well-served to pursue the art of the possible. Time is running out.  I'll leave you with, um, this:

Share this on Facebook
Tweet
This Is How Minnesota's Democratic Governor Responded to New Round of Riots In the State
Julio Rosas
Lax Border Policies Mean the Return of Violent Rip Crews, Environmental Damage in Arizona
Katie Pavlich
After Report on BLM Co-founder's 'Real-estate Buying Binge,' Fellow Activist Calls For Investigation
Leah Barkoukis