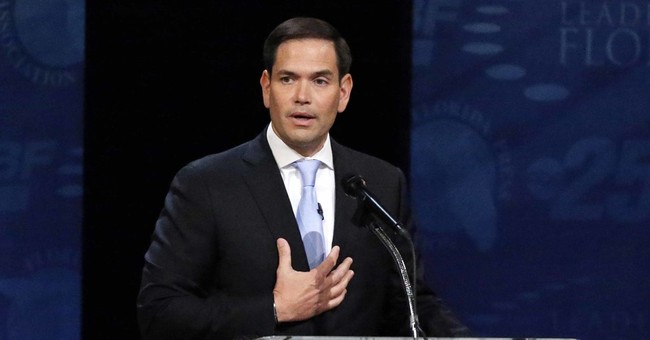 Last evening on Fox News Radio, Marie Harf and I interviewed Florida Senator Marco Rubio.  Our discussion began with the massive hurricane barreling down on the Sunshine State, which is expected to make landfall this weekend.  Experts estimate that the extremely powerful storm could inflict hundreds of billions in damage, with some communities facing mandatory evacuation orders.  Rubio described the magnitude of the hurricane and told us about emergency preparations being made by officials and agencies at the local, state and federal levels.  He also urged residents of South Florida and elsewhere to take warnings seriously, to pay attention to instructions from authorities, and to complete preparations by tomorrow afternoon -- after which, being outdoors will likely be hazardous.  Rubio recommended that families stock up with provisions for at least three days.

After covering Irma's looming impact, we shifted the conversation to political topics, including the possibility of passing a 'DREAM Act' to resolve the DACA situation.  Earlier in the week, Rubio called for guidance from the White House regarding what sort of bill President Trump would be willing to sign.  He reiterated that point again in this segment; when pressed on whether he'd either rule out, or actively consider, voting for a "clean" DREAM Act (as demanded by Chuck Schumer) with no immigration enforcement measures attached (though some Democrats are reportedly open to this), Rubio suggested it is too early for him to announce any definitive conclusion on that point.  Listen:

Fresh off of his commanding re-election victory, Florida's junior Senator was also noncommital on the President's surprise fiscal deal with Schumer and Nancy Pelosi, which stunned Republican leaders in the meeting.  Media accounts are calling it an 'early Christmas gift' to Democrats, wherein they further gummed up what is expected to be a challenging legislative calendar for the GOP to manage this fall, and inserted another concession-extracting leverage point for themselves right before Christmas.  GOP sources familiar with the meeting were astonished by the president simply handing Democrats exactly what they asked for, caving to their first ask -- while cutting off his own Treasury Secretary mid-sentence:

"We came to a happy ending here," Schumer

Rubio said he's never supported a debt ceiling hike without offsetting 'fiscal discipline,' and sounded wary of the president's giveaway -- but stopped well short of opposing it outright, speculating that Trump may have jumped at the chance to temporarily buy more time (but not nearly enough time, according to Republicans) out of a sense of perceived 'pragmatism.'  Other theories regarding Trump's motivations abound.  Finally, Rubio sounded off on the spate of attacks directed at US diplomats in Cuba, for which he said the Communist regime in Havana is entirely responsible, regardless of whether they directly carried them out.  Cuba is such a tightly-controlled society that it's inconceivable such sophisticated targeting could have been carried out without the government's blessing or assistance, he reasoned.  Rubio said these hostile actions in the wake of President Obama's restoration of relations with the island dictatorship further expose the fundamental nature of the regime.