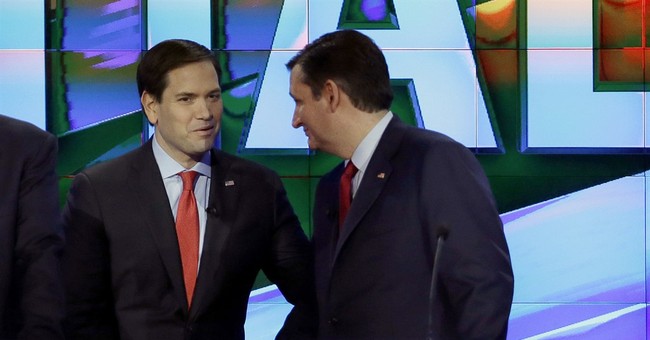 A common refrain from trenchant critics of the mainstream media is that Twitter is a particularly useful tool in unmasking the biases and prejudices harbored (and often indignantly denied) by journalists.  It's a medium through which reporters are liberated to broadcast their relatively unfiltered, unedited thoughts to the world in real time, occasionally opening revealing windows into their own political preferences.  Through social media, reporters who officially operate under the pretense of impartiality routinely expose their slanted ideological predilections, which can be quite instructive.  One such example emerged last night, when a New York Times journalist offered an assessment of two prominent Republicans' forceful denunciations of white supremacy and racism.  Here is what Senators Marco Rubio and Ted Cruz had to say in the wake of the disturbing Charlottesville melee:

Nothing patriotic about #Nazis,the #KKK or #WhiteSupremacists It's the direct opposite of what #America seeks to be. #Charlotesville

Very important for the nation to hear @potus describe events in #Charlottesville for what they are, a terror attack by #whitesupremacists

And here's what a Times investigative reporter -- whose bio claims that he covers the Trump presidency "without fear or favor" -- tweeted about these robust statements of moral clarity:

Sorry to be cynical, but most of all Rubio and Ted Cruz to me seem mostly to be doing a tremendous job of posturing for 2020.

Here we have a supposedly objective journalist struggling to fathom how or why two people of color might genuinely abhor, um, white supremacy, instead linking their stances to rank ambition.  "Sorry to be cynical," he writes, but he doesn't seem very sorry.  In fact, he seems rather eager to smear two elected officials for doing exactly the right thing.  Question: Is Lipton equally "cynical" about liberal lawmakers of color aggressively condemning flagrant racism?  Stephen Hayes cited the tweet as a perfect illustration of why conservatives place virtually zero trust in the media's capacity to cover them fairly.  This slime job was so gross that I'm not sure even the DNC would have ventured down this path.  But a no-fear-or-favor 'reporter' felt totally comfortable going there.  Lipton's bio also includes this line: "Transparency is a powerful tool."  Indeed.  Cruz fired back:

Gosh, you're right. Because Nazis & the Klan have such love for Cuban-Americans. If only we worked for a paper that shilled for Stalin.... https://t.co/PBsFqauXq2

Regarding that last jab, the Times does seem to be striving for self-parody lately, publishing a puff piece on Lenin's love of nature (aside from the millions of people he butchered, naturally), and extolling the wonders of women's sexual gratification under socialism.  I'll leave you with this disgusting slander from the Left's Alex Jones, who runs an influential fever swamp blog:

NRA and American conservatives/Nazis are one and the same. https://t.co/Jl0cnkimoZ

Given the amount of money Daily Kos funnels to Democratic candidates, will national Democrats be forced to play "will you denounce?" over this revolting attack against half the country?  Don't count on it.  Oh, and one more more stray thought: I've seen some liberals trying to delegitimize strong anti-white supremacy declarations from Republican officials who endorsed or voted for Trump (or have voted with "Trump's agenda").  This is lazy, stupid thinking.  There is zero contradiction in choosing to support the Republican nominee for president -- and/or pursuing a host of conservative legislative priorities and appointments -- and also speaking out against despicable racism.  None.  Pretending otherwise does the nation a grave disservice, and suggests that those soulless hacks pushing that line of argument aren't terribly interested in standing firm and united against bigotry; they'd rather score cheap political points.  Shame on them.