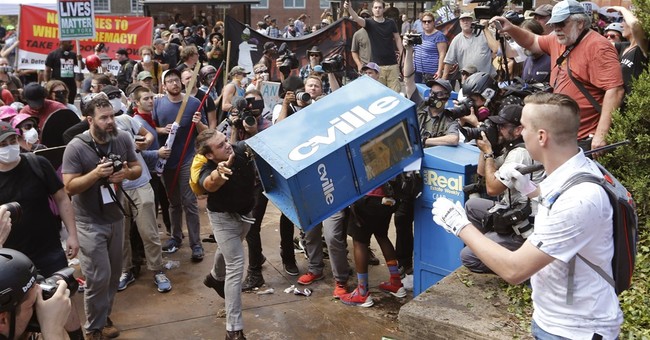 The New York Times is out with a story today addressing the firestorm over President Trump's initial, vague condemnation of "many sides" in Charlotte, exploring the angle of conservative frustration over media double standards on political violence.  Since I'm cited in the article, I thought I'd clarify a few things.  Here's how Times reporter Jeremy Peters quotes me:

There is also a new political term to describe the circular firing squad in which right and left have blamed the other for the country’s degenerating political debate — “whataboutism.”  Guy Benson, a conservative writer and an author of the book “End of Discussion,” which argues that the left has tried to shut down political debate by declaring certain topics off the table, said he sees a “whataboutism overreach” among some conservatives. But on the other hand, he said, “Are we allowed to point out that left-wing violence is a problem and did probably contribute to what happened in Charlottesville and not be compared to Hitler?” He said that conservatives would be better served by finding other ways to make points of media bias and political double standards. “Round and round we go with this one-upsmanship of who’s worse,” Mr. Benson added, “and that’s a really terrible way to argue.”

Peters read this piece yesterday, then reached out for additional comment, and I was happy to oblige.  As I've written, 'whataboutism' definitely can be a problem on the Right, as partisans justify or defend controversial actions from Trump, for example, by raising tendentious "but what about...?" points to deflect from the substance of the criticism at hand.  An endless merry-go-round of, 'oh yeah, well your side did this other bad thing' finger-pointing has the effect of excusing bad behavior, and does little to improve anyone's conduct.   But in my conversation with Peters, my reference to "whataboutism overreach" was actually directed at the Left.  Because Trump loyalists go to the 'whataboutism' well far too often, many liberals' reflexive instinct has become to over-apply that term as a means of delegitimizing any and all reasonable arguments that apply to their "side," regardless of relevance or context.  Also, my quote invoking Hitler was not a weird non-sequitur.  I was specifically talking about observations like this, which I called out in my commentary yesterday:

When you read history of Nazi Germany, one of the chief arguments Hitler made was he was standing up to "violent leftists"

Sorry, but if we are going to have a national conversation about ugly racial politics and violence, we cannot ignore half -- or at least a large portion -- of the mutually-fueling equation, as Ben Shapiro lays out:

On the one side, a racist, identity-politics Left dedicated to the proposition that white people are innate beneficiaries of privilege and therefore must be excised from political power; on the other side, a reactionary, racist, identity-politics alt-right dedicated to the proposition that white people are innate victims of the social-justice class and therefore must regain political power through race-group solidarity…[these factions] are largely growing in opposition to one another. In fact, the growth of each side reinforces the growth of the other: The mainstream Left, convinced that the enemies of social-justice warriors are all alt-right Nazis, winks and nods at left-wing violence; the right, convinced that its SJW enemies are focused on racial polarization, embraces the alt-right as a form of resistance.

A national discussion about political violence must include the obviously relevant fascistic thuggery of Antifa Leftists.  Noting that Charlottesville police said the clashes were engaged by 'mutual combatants' does not diminish the evil of white supremacy or neo-Nazism.  At all.  It states a fact about the nature of the violent upheaval on the ground.  President Trump's error over the weekend was failing to call out and reject specific hate groups by name; it was not accurately condemning grave criminality on both sides of the armed conflict (in this case, the immorality of one side's aggression dwarfed the other's, due to the heinous, lethal car attack).  Antifa's brutality and violence hasn't merely been limited to the horrible spectacle in Virginia.  They've assaulted Trump supporters at political events, they've rioted to prevent others' exercise of free speech rights, and they've used threats and intimidation to cancel civic events in which Republicans planned to participate.  If we are serious about putting a stop to escalating political violence in America, acknowledging the far-Left's significant contribution to the problem is not "whataboutism."  It's aboutism.

I'll also add that the other element of the Times story that irked me was its passing reference to the Scalise shooting, which was name-checked only through the prism of conservatives "seizing on" the incident to make a point.  This is an echo of the tiresome "Republicans pounce" trope, in which journalists frame coverage by focusing on the Right's response to an incident, rather than the incident itself.  If we're talking about the hate and bloodshed that does exist "on many sides" a recent, politically-motivated attempted massacre of Republican Congressmen by an avowed leftist is a giant, glaring data point.  And yes, conservatives did notice that the tone, breadth and duration of the resulting media coverage was markedly different than what we witnessed in the aftermath of the Gabrielle Giffords shooting -- which turned out not to have been political in nature, in spite of the Left's collective rush to judgment.  None of this excuses the White House's grossly insufficient immediate response to the grotesque hatred and deadly chaos in Charlottesville, but it absolutely pertains to the wider debate.

Incidentally, Peters includes statistics about the culprits in nearly 400 domestic terrorism-related murders over the last decade, most of which were are attributed by right-wing extremists.  Fair enough, but what are conservatives to make of the FBI's totally confounding decision not to categorize the Scalise shooting as domestic terrorism?  It's a macabre question, but if any of the victims on that ball field had died (thank God none of them did), would those deaths not have been included the body count tallies?  If we're going to talk about political violence -- while avoiding the unfair apportionment of blame for individuals' terrible acts -- we need to talk about the totality of the problem.  If one side of the conversation is exempt from criticism, then it's not a conversation.  It's another slanted lecture.