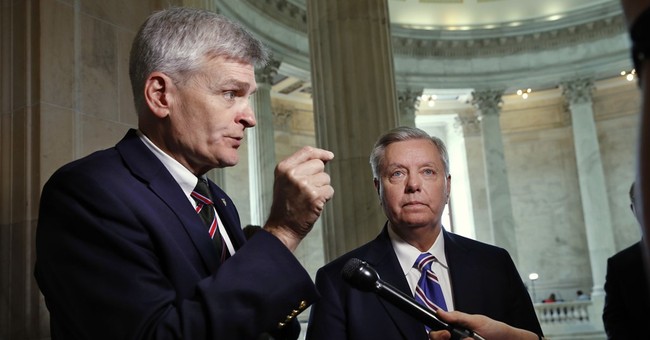 Yes, we've arrived at the stage in this slog wherein members of the Senate are apparently poised to pass a bill that many of them vehemently believe should never become law, as-written.  Wait, what?  Bear with me, it's a bit complicated.  As you know, Senators are preparing to vote on "skinny" repeal legislation, the contents of which are still being hashed out.  Mitch McConnell is trying to write a bare-bones bill featuring provisions that enjoy broad support across the entire GOP conference, with the immediate goal of attracting 50-plus-one votes.  If he's able to do so, one of two things would happen:

Either  the House and Senate would sit down to reconcile their respective AHCA and "skinny" plans under the auspices of a conference committee (designed to produce a substantively-sound bill that can garner majority support in each chamber), or  the House would take up the Senate-passed document and vote on it.  If the latter were to occur (my initial theory), and the House voted in the affirmative, it would go to the White House and be signed into law by President Trump.  But a group of Senators are warning that they can only support a pared-down "skinny" bill if the House promises not to pass it; they want solid assurances from Speaker Ryan that the next step is a conference committee:

Republican senators are openly warning that the House better not pass the Senate's skinny repeal bill.

Lindsey Graham says skinny repeal is a "political cop-out" and a "disaster" and he'd only vote for it so it can go to conference.

Graham's sentiment has been echoed by several colleagues -- including John McCain, for whom a pinky swear from Ryan may not be sufficient.  One particularly recalcitrant Republican Senator says Ryan has given his word:

Susan Collins says there's been a commitment from Speaker Paul Ryan to go to conference. So what happens if they can't find agreement?

Question, though: What happens if a conference committee is convened, but eventually ends up snagged in an insurmountable impasse?  Might the House just accept the low-hanging fruit of the Senate's bill, just to pass something and call it a "win"?  That is possible, but determining whether that would be a remotely responsible action really depends on what's in the Senate legislation, which is still taking shape.  If it's truly skinny as can be, just eliminating the individual mandate effectively in isolation, without an replacement anti-free-riding mechanism, would destabilize the individual market even more.  That, in turn, would quite likely reduce access and raise premiums -- also known as the fundamental flaws of Obamacare. No wonder some Senators are stating outright that the skinny bill cannot be the final law.

Democrats are passing around a CBO score showing that the "skinny" bill would increase individual market monthly rates by 20 percent, but a senior GOP aide tells me that even the CBO concedes this analysis is based on cherry-picked elements of a yet-unannounced bill, as provided to them by Democrats.  In other words, it's not a complete or accurate picture.  Republicans are working on legislative patches to address certain elements of the bill that have raised red flags with the Senate parliamentarian, who is cautioning that some important pieces of the puzzle may violate reconciliation rules.  If those can be reworked and attached to the bill -- especially an item making it easier for states to seek waivers to some Obamacare coverage mandates -- that might mitigate premium increase projections.  Again, we don't know what this thing is going to actually look like until it arrives.

All of which raises another question: Why would anyone believe that a conference committee would make any discernable difference at this point?  If, after weeks of intense negotiations, McConnell couldn't craft a palatable plan for a majority of his members, how could a conference possibly change that dynamic?  Supporters of the idea offer a few explanations: First, old-fashioned legislative inertia.  The closer the process gets to a final "yes," the harder it is for hesitant members to just discard it.  Second, it buys time for key CBO scores to arrive.  One of the reasons the BCRA went down as hard as it did this week is that a 60-vote threshold was required under the rules.  Why?  Because the effects of the Cruz amendment (which would allow state based insurers to offer cheaper, less comprehensive plans so long as they also offered at least one or two Obamacare-compliant ones) and the Portman amendment (adding $100 billion to help transition Medicaid enrollees into private plans) had not been calculated by CBO.  Therefore, it was unclear how they would affect the budgetary impact of the overall bill, without which it could not be passed with a simple majority under reconciliation.  Once members have more information of those provisions, they can reconsider how and why they should or should not be included in a final deal.

Third, after multiple votes in both chambers on a host of provisions (including from tonight's vote-a-rama), leaders will have much more data to work with in terms of assembling a policy puzzle capable of passing both houses.  It's probably also the case that members who were once wedded to "their plan" may be more open to non-ideal compromises after their own proposals were aired and defeated.  My hunch is that a hypothetical ultimate bill would be fatter than the "skinny" plan, but skinnier than the BCRA or AHCA.  In order to make the resulting product more appealing to conservatives and also relatively sound from a policy standpoint (that matters a lot!), a conference-adopted bill would likely need to rescind more of Obamacare's taxes, and pump more "stabilization" funds into insurers' coffers.  But those elements cost money on paper; remember, anything that passes within the relevant reconciliation guardrails must reduce deficits by $100-plus billion (this also applies to a "skinny" bill).  To make that math work, there will need to be spending reductions, which is where Medicaid might come in.

But have moderates extracted a guarantee of no changes to Medicaid from leaders?  This isn't defensible in terms of fiscal prudence and policy fairness, but it's a real, live political consideration.  If Obamcare's Medicaid expansion becomes sacrosanct, how will they get from point A to point B mathematically, coming out of a conference committee?  My guess is that they'll attempt to cross that bridge if and when the Senate passes something late tonight. I'll leave you with Chuck Schumer ripping Republicans for this bizarre and sordid legislative process.  He's right, although conservative activist Phil Kerpen reminded the Democratic leader of another time shady shortcuts were taken in service of protecting a controversial healthcare push:

Obamacare was an unfinished mess meant to be fixed in conference that the House swallowed because Scott Brown won. pic.twitter.com/ANVxojSL8s

Democratic hypocrisy aside, there's sausage-making, then there's whatever this is.