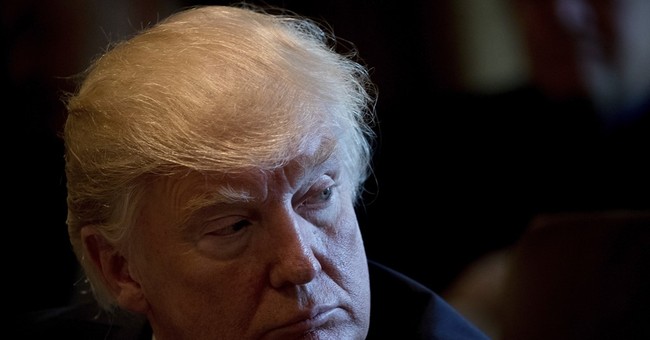 When this rumor started floating around yesterday -- not based on public statements from a 'fake' or anonymous source, by the way -- it sounded too crazy to be true, even by this president's standards.  Sure, Trump had made his displeasure with the existence of a special counsel clear.  Sure, some of his top allies have started questioning Robert Mueller's credibility and decrying a "witch hunt" in the making (this was quite a reversal for some).  And sure, a close friend and ally of the president went on PBS News Hour and said this:

But Ruddy himself calls it a bad idea, and many, many people reportedly agree -- including a host of presidential advisors.  In my exclusive interview with House Speaker Paul Ryan on Hugh Hewitt's radio program this morning, he poured cold water on the idea of angling to dismiss Mueller, following up with an expression of full confidence in the special counsel's professionalism and integrity in a gaggle with reporters later in the morning:

For his part, the Deputy Attorney General who made the call on appointing a special counsel (after Jeff Sessions recused himself from the Russia matter) told Senators today that he saw absolutely no reason to terminate Mueller.  And Sessions, asked about Mueller, also said that he has confidence in the former FBI chief now helming the Russia probe:

Sen. @LindseyGrahamSC: "Do you know of any reason for cause to fire Mr. Mueller?"
Deputy AG Rod Rosenstein: "No I do not Senator." pic.twitter.com/hsUh3LkIn1
— CSPAN (@cspan) June 13, 2017

The White House has also pushed back on the 'fire Mueller' speculation.  All of which is to say, if this was a trial balloon, it was quickly shot to pieces.  Let's also recall that despite the media's tunnel vision on Trump, the wider Russia investigation is examining a much wider array of issues and questions pertaining to our geopolitical adversary's malicious meddling efforts in the 2016 election.  Bloomberg reported new, disturbing details about that cyber campaign today, including facts not previously known by the public:

Russia’s cyberattack on the U.S. electoral system before Donald Trump’s election was far more widespread than has been publicly revealed, including incursions into voter databases and software systems in almost twice as many states as previously reported. In Illinois, investigators found evidence that cyber intruders tried to delete or alter voter data. The hackers accessed software designed to be used by poll workers on Election Day, and in at least one state accessed a campaign finance database. Details of the wave of attacks, in the summer and fall of 2016, were provided by three people with direct knowledge of the U.S. investigation into the matter. In all, the Russian hackers hit systems in a total of 39 states, one of them said.

No votes were changed (sorry, Democrats), but it's clear that the Russians were scouring our system for weaknesses.  And James Comey was certainly correct last week when he declared that Moscow "will be back" to tamper in future elections.  That should be wholly unacceptable to every American.  The Senate is right to be pursuing new, bipartisan sanctions targeting the Kremlin.  As for the 24-hour Mueller panic, it appears to be dead and buried after today's events.  Unless the president unwisely decides to revive the story, that is. Which he shouldn't.  Firing Mueller, even if you believe asking about his soft spot for Comey and his Democrat-heavy hires thus far are legitimate concerns (I think they're fair questions), would be astonishingly self-destructive.  It would indicate that Trump is either so willing to follow his egotistical impulses as to look extremely guilty, or he is extremely guilty.  Neither one is a positive for the White House, to put things mildly.  And the last thing Trump needs now is more bad press.  Yikes: