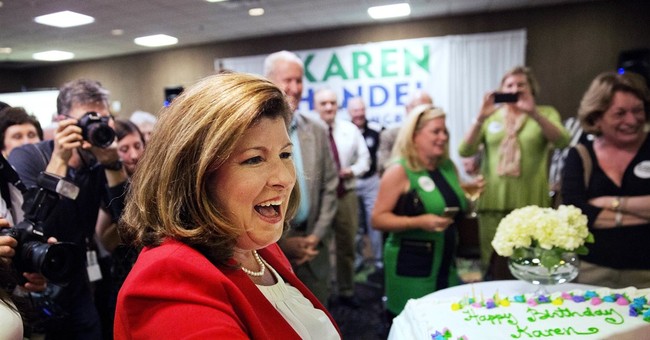 In late May and early June, two surveys of Georgia's special Congressional runoff election showed liberal Jon Ossoff opening up a seven-point lead over conservative Karen Handel.  Those were outliers, Republicans insisted; the race was much closer.  Sure enough, four of the next five public polls showed Ossoff ahead by three points, three points, one point and two points, respectively.  The other showed an exact tie.  Then a pair of election eve surveys dropped yesterday.  The first produced a 49-49 tie, with Handel gaining momentum (she was down two in the last WSB poll):

The next?  Handel's first lead in any public poll since the first week of May:

This is the first legit poll that has Handel ahead in over a month. Has her up 2. https://t.co/9Hr3QwzLGX

Georgia 6 now looking more like a pure 50/50 toss-up, instead of a slight Ossoff edge. https://t.co/kNWHYCADWc


It's going to be awfully close, folks:

Final RCP average in #GA06 has Handel ahead of Ossoff by *two tenths of one percent:* pic.twitter.com/aRFD1SxNqt


If you live in Georgia's Sixth Congressional District, you have until 7pm to go vote.  Someone who cannot do so in this election is Jon Ossoff, the Democrat running for the seat.  As has been well established, he doesn't live in the district -- although his campaign has instructed volunteers to tell skeptical voters that he resides "three blocks" away; he's repeatedly said that he lives just "down the street."  Is that true?  The Washington Free Beacon's Brent Scher traveled on foot from Ossoff's home to the border of GA-06 and documented the process on video.  It took him two hours to walk from point A to point B, which Team Ossoff claims is a journey "down the street" of "three blocks."  Nope:


In retaliation for exposing Ossoff's residency spin as disingenuous and misleading, Scher was barred from covering an Ossoff event last evening:

I was escorted out of an @Ossoff event tonight. The event was about a 6.5 hour walk north from @Ossoff's home.https://t.co/jcXQ2O9SxI

Inside the rally from which an inconvenient reporter was thrown out, supporters chanted "this is what democracy looks like." Ossoff may have a strong following among urban hipsters, but even for them, that's laying on the irony pretty thick.  Though a conservative journalist was not permitted inside the event, no word on whether any Ossoff's fellow non GA-06 resident donors were welcome.  One would imagine they would be; after all, less than four percent of all Ossoff donations came from within the state of Georgia.  As we highlighted yesterday, these numbers are pretty stark:


Overall, Ossoff has out-spent Handel by a hefty margin, with outside groups joining the fray with millions in ad spending.  The supposed "anti-money-in-politics" party is awash in cash, as is so often the case:

Ossoff -- boosted by non-Georgians -- has outspent Handel by 6-to-1 margin. All in, the Left has outspent the Right by millions in #GA06


I'll leave you with this testy exchange between Handel and the same liberal reporter who was assaulted by Republican Greg Gianforte in Montana last month.