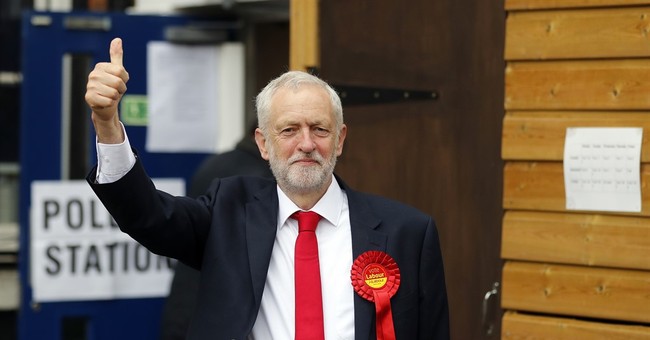 At the end of April, Theresa May's Tories held jaw-dropping leads over the Labour Party in public polling.  The conservatives were hovering in the mid-40's (one headline-grabbing survey had them hitting 50 percent), with Labour languishing in the mid-20's.  The UK's major left-wing party appeared to be teetering on the brink of a historic wipeout, validating the Prime Minister's decision to call surprise elections.  Then, near-catastrophe struck, in stunningly short order.  Riding a potent (and somewhat misleading) attack line about Tory cuts to public safety services leading up to several terrorist attacks (and partially blaming Britain's involvement in recent wars for Islamist violence), Labour leader Jeremy Corbyn convinced Labour partisans to 'come home,' as minor-party support collapsed.  And May -- whose bloodless, robotic repetition of her "strong and stable" slogan appeared to grate on many Britons -- essentially played prevent-defense as her party's lead plummeted.  This evinced an entitled attitude: The polls say I'm going to win, and you don't really have an alternative, because the other guy is a nut.  Sound familiar?

In the end, the conservatives won a historically-high percentage of the vote (actually increasing their 2015 victory margin by more than five points) and carried nearly 60 more seats than their closest competitors.  But due to a big late surge in support for Labour, and the large-scale abandonment of third parties, they merely outpaced Labour's popular vote total by a little over two percentage points, losing 13 seats while Labour gained 30.  The Prime Minister's snap election gamble blew up in her face, weakening both her own leadership and her party's standing.  The silver lining is that a conservative government will endure; the Tories will have enough seats to join together with a (fringe) party from Northern Ireland to form a bare majority coalition.  Radical zealot Jeremy Corbyn will not be the next Prime Minister.  The frightening news is that he came awfully close to attaining that title, with young voters overwhelmingly backing his party.  I'd spend some time explaining why Corbyn has spent a lifetime earning the title of 'radical zealot,' but George Will has already done the heavy lifting on that task.  Think of it:  This man had a legitimate chance of being the next leader of the United Kingdom:

In the 1983 election, the last time Labour flirted with serious socialism, its manifesto (platform) was described as “the longest suicide note in history,” and a party activist advocated “no compromise with the electorate.” The electorate was not amused, and Prime Minister Margaret Thatcher continued residing at 10 Downing Street. That year, Corbyn was elected to the House of Commons. He spent his next 32 years opposing the monarchy; writing columns for a communist newspaper; expressing admiration for Hugo Chávez, whose socialism propelled Venezuela toward today’s chaos; proposing that taxpayers should be permitted to opt out of paying for Britain’s army; advocating that Britain leave NATO and unilaterally scrap its nuclear deterrent; blaming NATO, meaning the United States, for Vladimir Putin’s war against Ukraine; calling the terrorist groups Hamas and Hezbollah “friends”; appearing with and funding Holocaust deniers and other anti-Semites; criticizing China’s Communist regime for deviationism in accepting some free markets; demanding that Tony Blair, the only Labour leader since 1976 to win a general election (three of them), be tried as a war criminal (for supporting the Iraq War); praising Iraqi insurgents killing Americans; and calling the killing of Osama bin Laden a “tragedy.” Along the way, Corbyn got divorced because his wife insisted on sending their eldest son to a selective school whose admissions policy recognized merit.

Last September, in a Labour Party process in which an intense fraction of 1 percent of the British electorate participated — a cohort intensely interested in things other than winning the next election — Corbyn was elected party leader with 59.5 percent of the vote in a four-way contest. He promptly named as shadow chancellor of the exchequer a former union official who lists in “Who’s Who” his hobby as “fomenting the overthrow of capitalism,” who says he was joking when he said that if he could relive the 1980s he would have assassinated Thatcher but who was serious when he praised IRA terrorist bombers. Corbyn’s shadow farming minister, a vegan, says, “Meat should be treated in exactly the same way as tobacco, with public campaigns to stop people eating it.” Corbyn, appearing with unmatched jacket and trousers and with his tie loosened at a St. Paul’s Cathedral service commemorating the Royal Air Force’s heroism in the Battle of Britain, refused to sing the national anthem.

That divorce detail is really quite something.  Oh, and this woman was Corbyn's would-be Home Secretary:

These people won 40 percent of the popular vote, Labour's best performance since 2001 -- the year the twin towers were knocked down by followers of Osama bin Laden, whose execution during a Navy SEAL raid a decade hence was decried by Corbyn as an "assassination" and a "tragedy." Really.  But despite glad-handing IRA terrorists, cozying up to vile anti-Semites, and embracing Hamas and Hezbollah terrorists as his "friends" (which he was later forced to renounce), there's at least one person Jeremy Corbyn simply cannot abide:


It's not a cancellation, by the way, but Mr. Corbyn prefers not to get bogged down in such details.  Even if you're put-off by Trump's untimely and unseemly criticism of London's mayor in the immediate aftermath of a deadly terrorist attack (I am), and even if you're horrified by Trump's decision to exit the non-binding Paris Accord (I am not), Trump is the duly-elected leader of Britain's closest ally.  Corbyn has tolerated and embraced some of the worst elements on planet earth over his multi-decade career as an anti-Western crusader, yet he pretends to draw a line over Donald Trump?  What a pitiful, self-serving bit of political preening from a small, morally-obtuse man.  As you ruminate on his opportunistic slap-down of Trump, I'll leave you with this love letter:

Thanks Hugo Chavez for showing that the poor matter and wealth can be shared. He made massive contributions to Venezuela & a very wide world
— Jeremy Corbyn (@jeremycorbyn) March 5, 2013

Ah yes, Chavez's Venezuela, where Socialism's ruinous effects are on daily display, and where international terrorists were afforded safe haven by the deceased strongman to operate and train.  Corbyn and Chavez were kindred spirits.  By the way, why were global elites across the West unified in panic over the prospect of a Le Pen victory in France, but barely whispered a word about the rise of Corbyn's wild-eyed fanaticism?  Ross Douthat has a good examination of that question.  My abbreviated take: 'Communist chic' is real.