Analysis: For Trump, Comey's Prepared Testimony is Unflattering, But At Least Partially Exculpatory 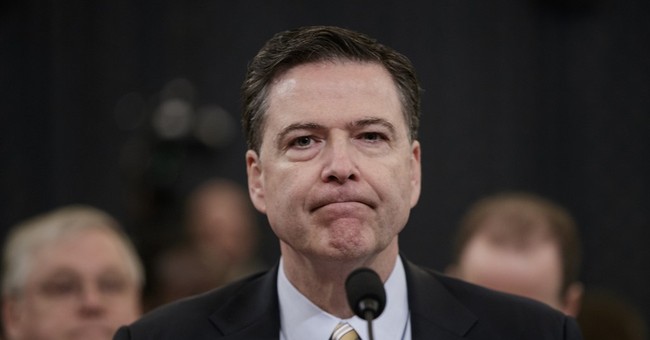 On Tuesday, I posed a series of questions for fired FBI Director James Comey ahead of his scheduled testimony.  Yesterday, the Senate Intelligence Committee posted Comey's opening statement online, as prepared for delivery.  It proactively addresses a number of the queries I suggested.  Its contents are a mixed bag for the White House, but do not include any new earth-shaking revelations.  Here's what you need to know as Comey prepares to be sworn in later this morning:

(1) THE FLYNN REQUEST.  As Katie mentioned, Comey will confirm that yes, President Trump asked him to "let go" of an investigation into former National Security Adviser Michael Flynn.  Comey says this request was "very concerning, given the FBI’s role as an independent investigative agency," prodding him to document the meeting immediately after it concluded, as he did every interaction with the president after he took office. Nevertheless, this detail seems important:

I had understood the President to be requesting that we drop any investigation of Flynn in connection with false statements about his conversations with the Russian ambassador in December. I did not understand the President to be talking about the broader investigation into Russia or possible links to his campaign. I could be wrong, but I took him to be focusing on what had just happened with Flynn’s departure and the controversy around his account of his phone calls.

Trump asking for any sort of special legal dispensation for a political friend and ally is at least ethically questionable, but this clarification delivers a blow to the Left's collusion/cover-up narrative. Trump was trying to help his buddy out on a tangential matter (this was inappropriate and foolish); he was not trying to uproot, derail, or weaken the larger Russia investigation, in Comey's mind.  That matters.

(2) THREE ASSURANCES TRUMP WASN'T AN FBI TARGET.  One of the assertions the president has made repeatedly, and that has been met with skepticism and ridicule in many quarters, is that Comey told him on three different occasions that he was not a subject of the FBI's Russia investigation -- which Trump understandably viewed as a "cloud" over his early presidency.  Comey will affirm that Trump has been telling the truth on this point, enumerating each of the three relevant instances:

Here are the three (3) times Comey told Trump he was not target of investigation. pic.twitter.com/A3OQseoh4R
— Andrew Clark (@AndrewHClark) June 7, 2017

The picture that emerges here, in my view, is that of an exasperated president who believed his presidency was being stymied by unfounded innuendo, and who wanted the country to know what the FBI Director had told him privately on multiple occasions.  Comey was reluctant to do so because if that status were to change (i.e., if Trump did become a target as new evidence was uncovered) after he'd publicly gone on-record about the question, he would be compelled to disclose that update (just ask Hillary Clinton about this).  Such a hypothetical pronouncement alone could do grave damage to Trump's administration, even if that strand of the probe ultimately ended up leading nowhere.

(3) TRUMP DEMANDED 'LOYALTY.'  At a private dinner in January, Comey says Trump pressed him twice about the need for "loyalty."  The resulting back-and-forth reads as excruciatingly awkward, with Comey also concluding that the president was angling to create an improper "patronage" dynamic that troubled him:

Comey describes a tense and awkward atmosphere after Trump asked him for his "loyalty" pic.twitter.com/6mMijZQ6jt
— Lachlan Markay (@lachlan) June 7, 2017

If Comey's perceived lack of "loyalty" (in service of the president's 'requests') resulted in his retributive firing, that could well be considered obstruction of justice, or an impeachable offense. But proving that will likely be difficult in light of the many complicating factors at play with Comey and his controversial tenure. The White House did not help its own cause on this front by offering multiple contradictory accounts of why Comey was dismissed, and how that determination was reached.  The truth could really be this simple in the end, especially now that we know Trump was correct in insisting that Comey had told him three times that he was not under investigation:

It seems Comey did assure Trump that he was not personally under investigation and Comey's reluctance to make that public infuriated Trump.
— Ryan Lizza (@RyanLizza) June 7, 2017

(4) TRUMP APPEARED TO SUPPORT THE RUSSIA PROBE.  Trump consistently and adamantly told Comey that he was not involved with the Russians in any unsavory or problematic way, a point he desperately wanted relayed to the American people.  But the notion that he wanted to kill off ongoing investigations into members of his team or campaign is undermined by this statement:

Trump to Comey: If any of my associates *were* improperly involved w/ Russia (stressing he was not), "it would be good to find that out." pic.twitter.com/dwXmtCXxZ0
— Guy Benson (@guypbenson) June 7, 2017

(5) COMEY WANTED NO FURTHER PRIVATE MEETINGS. Trump's combination of private cajoling, ethically-questionable requests, and implicit pressure (how is the President of the United States stating his clear preference and asking you to do something not pressure?) bothered Comey greatly, who felt the president was disrespecting the Bureau's independence.  After the now-infamous March exchange about Flynn, Comey asked Attorney General Jeff Sessions to ensure that he would never be cornered into additional one-on-one meetings or conversation with the president in the future:

Comey: "I took the opportunity to implore the Attorney General to prevent any future direct communication between the President and me." pic.twitter.com/j8JfyxJs2E
— Zeke Miller (@ZekeJMiller) June 7, 2017

Today's question-and-answer session may be illuminating and uncover more important information, but what Comey's opening statement indicates to me, especially when coupled with various news reports, is this: President Trump was incensed that (what he sees as) a totally bogus Russia storyline was hijacking his presidency and was therefore extremely eager for exculpatory details be shared with the American people by credible law enforcement and intelligence officials.  This reasonable desire led him to basically beg Comey  -- and likely DNI Coats and NSA chief Rodgers -- to state on-the-record that he was not under investigation for anything related to collusion with Moscow during the campaign.  He also obviously believed that Michael Flynn was innocent of deeper nefariousness vis-a-vis Russia, and that any ancillary prosecution related to his inaccurate statements would therefore be over-the-top and unfair (hence his problematic "let it go" ask).  It should also be noted that both Coats and Rogers refused to answer whether Trump asked them to intervene with Comey yesterday, but Comey's upcoming testimony strongly suggests that Trump probably did.  Both men also denied that they were ever ordered or pressured to do anything improper or unlawful.

And thus we have more nuggets in an emerging portrait of a mercurial, impulsive president who routinely failed to recognize or adhere to boundaries of ethics and propriety in the realm of intra-executive branch dynamics. It feels reasonable to conclude that when Trump's fury boiled over after members of "his team," as he viewed them, declined to back him up, he sacked Comey.  Whether his overall actions amount to illegal conduct is open for interpretation, but that case still feels thin to me.  Alternate explanations for his behavior -- some rooted in Trump's unattractive (but not necessarily criminal) qualities of emotionality, ignorance and arrogance -- abound.  The single most damning piece of evidence against the president is his call to fire Comey after the FBI's probe into Flynn did not close up shop in accordance with his wishes, amid murky and shifting justifications from the White House.  A plausible case can be made that Trump resented Comey's commitment to the FBI's independence and canned him for refusing to do his bidding on behalf of a political ally.  That would reek of obstruction.

But an equally plausible scenario is that Trump was fed up with Comey's unwillingness to simply repeat private assurances in the open, which he thought would help lift a distortionary and distracting cloud hanging over his administration.  Hell, both parties seem to hate this guy anyway, and he's playing games on this Russia stuff, so I'll replace him, Trump may have thought, in a fit of pique.  I'll let others come up with the "official" reason, but he deserves to go, and no one from either party will shed many tears for him anyway.  An obvious and gigantic miscalculation in retrospect, if that indeed was his thought process.  But it's at least believable.

BOTTOM LINE: Comey's prepared testimony is unflattering toward the president in several significant ways, but it also helps fortify several pro-Trump narratives, as well.  It contains neither a previously-unknown bombshell, nor a 'smoking gun.'  Expect Democrats to home in on Comey's firing, and the reasons behind it, as a key Trump vulnerability.  But absent big unforeseen developments during the former FBI Director's exchanges with Senators today, New York Times columnist Ross Douthat -- who is right-leaning, but Trump-hostile -- appears to sum up the basic gist of Comey's upcoming sworn account rather well:

Trump's weird behavior re: Comey seems to reflect a man accustomed to being a boss, unprepared to be a president.
— Ross Douthat (@DouthatNYT) June 7, 2017

Before you go, may I remind you that Comey's interim successor, believed to be a Democrat, again confirmed under oath on Wednesday that the Russia probe is continuing unabated, free from political pressure, and equipped with adequate resources: