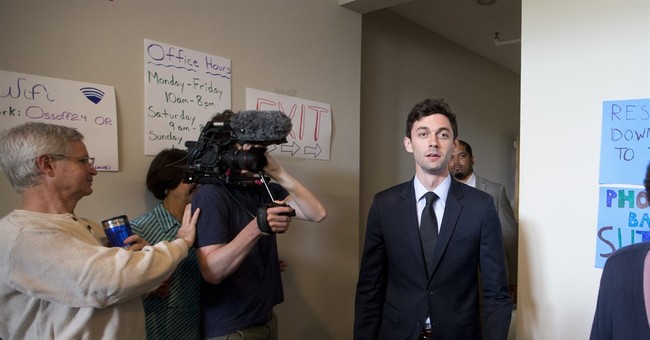 Early in the evening, signs looked strong for Democrat Jon Ossoff as he hoped to attract a simple majority of the votes cast in today's GA-06 special election. If he'd done so, he'd have landed a major blow against President Trump and the GOP by avoiding a run-off in which most analysts believe Democrats have a steeper hill to climb. He did not. With a critical mass of the vote counted, Ossoff is projected to finish in the mid-to-high 40's, setting up a June 20 runoff against Republican Karen Handel. Overall turnout was robust and Ossoff performed well in the early voting, but a strong GOP showing on election day overtook that advantage -- setting up a familiar dynamic:


Republicans are by no means guaranteed to win the June follow-up election between the two remaining candidates, but the GOP electorate will no longer be diced up 11 different ways. And for all the talk of Democratic intensity -- and let's be clear: there was a massive and expensive get-out-the-vote push for Ossoff -- enough Republicans rallied to deny Ossoff a victory tonight. The 30-year-old (who doesn't live in the district) appears to be hovering right around Hillary Clinton's vote percentage from November, which is rather strong for a Democrat, compared to previous cycles. That's the good news for the goalpost-shifting 'Resistance' coming out of the night. But there's another side to that coin:

True. Also true that if this goes to a runoff, the opponent will be Karen Handel, who is better suited to the district than Trump. https://t.co/PnPCAAB3lv


Exactly.  Trump ran historically poorly for a Republican in this district. As I mentioned earlier today, he lost GA-06 to Marco Rubio by double digits in the presidential primary, and only beat Clinton by a lone point there. Then-Congressman Tom Price, by contrast, carried roughly 62 percent of the vote in November. Karen Handel is a lot closer to a traditional Republican than Trump is, which could prove to be an important advantage in two months. Make no mistake about it: The battle over this seat is not over, but this one stings for the Left. They sunk millions of dollars and enormous energy into the race, and they weren't able to win. Will they double down and focus on the run-off with equal passion, or will they shift to the next chance to score a symbolic victory? We shall see. But for now, Republicans have dodged yet another bullet, and Democrats are still seeking their first legislative gain since Trump was elected. Thus far, six special elections in, only one seat has flipped...to the GOP.  Republicans shouldn't gloat, but Democrats have yet to see real evidence of a big blue wave building.  I'll leave you with this fair-minded admonition: