Pelosi: Everyone Knows That 'Shameful' James Comey Tipped This Election to Trump, Or Something 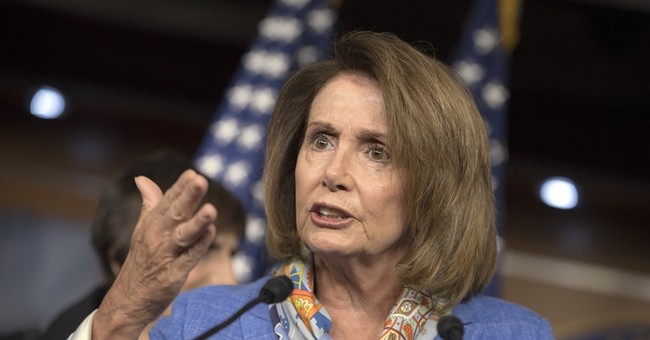 Why blame your godawful, widely-disliked nominee, or her disastrous campaign strategy when it requires so much less uncomfortable introspection to fault the Russians, or the FBI, or some other bogeyman for your across-the-board woes?  Scapegoating is certainly easier than grappling with one's own failed and rejected statist project, one's relentless and exhausting reliance on identity politics, or one's attempt to assert cultural dominance through stifling political correctness. Believe whatever you need to believe, Nance:

Pelosi on things which tilted the election: Comey..was devastating and shameful for our country

We've already run through the reasons why James Comey is not the culprit behind Hillary's loss to the least popular major party nominee in the entire modern era of American polling.  It was Hillary's own actions that proved "devastating" and "shameful."  She, not Comey, set up an improper and unsecure private email server that compromised thousands of classified communications -- some at the very highest levels of sensitivity.  She, not Comey, ignored specific warnings that her bootleg, improper email system was placing important secrets at risk.  She, not Comey, lied habitually to the American people about virtually every element of her conduct.  And it was her top aide, not Comey, who failed to turn over potentially relevant evidence that was later discovered just prior to the election.  It was a direct result of the decisions of Hillary Rodham Clinton that the FBI was even a factor in this election at all.  And the Democratic Party rigged their primary system to ensure that only a woman under (multiple, we now know) federal investigations could prevail.  In fairness to Pelosi, she may still be overwhelmed by the thrill of victory, having fought off a challenge to her stale, unpopular leadership that has witnessed her triumphant ascension to the House Speakership in 2006 to the yammering, intellectually-bereft Queen Bee of an historically-enervated House minority, decimated by her decision to march her caucus right off the plank known as Obamacare.  Either that, or her memory is back on the fritz.  Via the Free Beacon:

“He [Trump] returned with, ‘well, people told us that Saddam Hussein had—Iraq had weapons of mass destruction,'” Pelosi said. “It did not. The intelligence community never said that.” Pelosi blamed the “Bush-Cheney administration” for spreading the claim that Iraq had WMDs with “no intelligence to support that claim.” “It was a massive misrepresentation to the American people. But there’s nothing in the intelligence to support the threat that Bush-Cheney was presenting,” Pelosi claimed.

This is preposterously false, as several people noted -- including this Senior Fellow at the Council on Foreign Relations, who cited this 2002 assessment produced by US intelligence:

It's literally the first thing the Oct. 2002 NIE says. "We judge that Iraq has continued its WMD programs." https://t.co/PPjU848qAl https://t.co/R0PhSsO7LW

The CIA director famously told President Bush that Iraqi WMD's were a "slam dunk," and other Western foreign intelligence services also believed the Hussein regime had maintained an active and illegal WMD program at the time. Pelosi apparently remembers none of this, instead inventing the fairly tale that Bush and Cheney pulled the whole thing out of their posteriors, with no basis whatsoever.  And House Democrats have seen fit to re-elect this sharp-minded, universally-beloved woman to guide their party for at least two more years. She is, after all, a central figure in Democrats' exciting new youth movement, featuring a cast of fresh, forward-looking characters. Via Allahpundit: