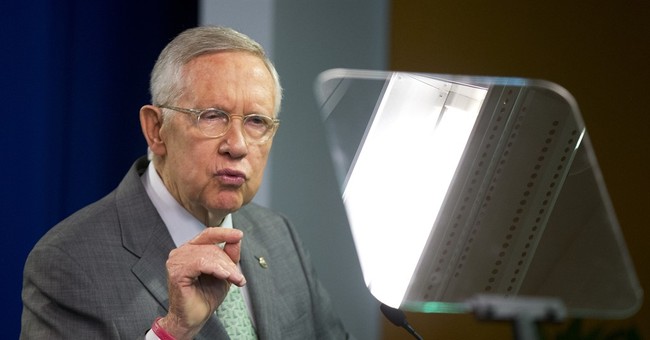 Right out of the gate, let's pause and savor the fact that the US Senate will be rid of its most miserable member -- a widely-detested serial smear merchant, sleazy character assassin, and creepy obsessive -- in a few short months. Harry Reid's poisonous reign is nearly over, and there's a decent chance Nevada's voters will replace him with a Republican. But for the moment, he's still around, doing his thing. Having taken a victory lap over his admitted slander of Mitt Romney four years ago, here's Dingy Harry insisting that informed Americans are deeply grateful for the turd sandwich of broken promises that is Obamacare:

Reid also declared that Hillary Clinton will win the White House and that Democrats will regain the Senate. As several people on Twitter pointed out, Reid's history of Obamacare-related political predictions is...a wee bit spotty.  Seriously, click that link for a quick laugh.  In fact, if someone truly spent a minute each day flipping through the newspapers about healthcare, he or she would understand that it has changed America for the worse.  Much higher rates, ballooning out-of-pocket costs, more federal debt accrual, decreased options for consumers, more uncompensated care, constricting networks, major insurers pulling the plug, imploding co-ops, collapsing marketplaces, and enduring unpopularity, as more Americans are directly harmed than helped by the $2 trillion law that was marketed with no downsides for anyone.

Reid, like many Democrats, is in deep denial of reality -- a reality that Republicans will once again use as an electoral cudgel.  Freshly increased premiums (many jumping by double digits) will be officially announced just before the November election, and GOP candidates are setting the table to exploit that looming bad news at the ballot box.  Missouri Republicans are blasting the Democratic Senate nominee in that state, Jason Kander, for his continued support for Obamacare's expansion.  The GOP and conservative groups are slamming Indiana Senator-turned-DC lobbyist Evan Bayh, who cast the decisive vote for Obamacare, for promoting bailouts for insurance companies who've lost money on the program.  In Arizona, John McCain is targeting his opponent with a tough new ad showcasing her pro-Obamacare vote, which she calls her "proudest" moment.  How's that working out for the people of her state?

Earlier in the week, we also brought you a pro-Kelly Ayotte spot running in New Hampshire, which highlighted her left-wing opponent's Obamacare cheerleading. In the wake of several terrorist attacks on the US homeland last weekend, Democrat Maggie Hassan is also bizarrely refusing to say whether she believes other would-be jihadist attackers might exist anywhere in the country. This is not a difficult or trick question, but Hassan is hemming and hawing as if she's being asked about Hillary Clinton's honesty:

WMUR, the state’s largest television station, pressed the Democratic governor on whether she thinks other terrorists may be living in the United States after suspected New York City bomber Ahmad Khan Rahami was apprehended following a shootout with police. “As this situation evolves I think we’ll learn more,” she said. “Given two chances Gov Hassan declined to say definitively whether she thought there were other potential attackers in the U.S.,” WMUR reporter Adam Sexton said. Hassan’s opponent Sen. Kelly Ayotte (R., N.H.) told the station that the FBI’s caseload demonstrates that there are potential terrorists living in America...Ayotte has challenged Hassan, who has never held federal office, to a foreign policy debate sponsored by the World Affairs Council of New Hampshire. Gov. Hassan declined the organization’s invitation after agreeing to three television and two statewide radio debates.

Given her apparent cluelessness, stiff-arming a foreign policy debate is probably a smart move. By the way, another poll shows Ayotte surging back into the lead in this race. Monmouth's respected pollster (earning an A+ rating from FiveThirtyEight) has the Republican incumbent up by two points, outperforming Donald Trump in the state by a wide margin:

Ayotte has now led in three straight polls and has retaken the RCP average lead by 2.5 points.  If she can hold on to her seat and Joe Heck can succeed Reid in Nevada, Democratic hopes for a Senate takeover are likely doomed.  You'll note that the GOP's gubernatorial nominee is doing even better. Winning that race would be a pick-up for Republicans. I'll leave you with another Obamacare note, which would be amusing if not for its stark illustration of the real financial hardships this failing law is inflicting on average people:

For the first time in her life, 26-year-old freelance designer Susannah Lohr had to shop for health insurance this year. She called up a major insurer in the St. Louis area where she lives, and it offered her a plan with a hefty $6,000 deductible — that’s the amount she would have to cover herself before the insurance kicks in. When she balked, the salesman on the phone suggested that she could buy a “gap plan,” a separate policy for $50 a month to cover her deductible. “After I got off the phone with him, I realized: That’s actually just insurance for my insurance,” she said, laughing. Gap plans, used to cover out-of-pocket expenses like high deductibles, are becoming increasingly popular among consumers and businesses. The rising price of insurance is driving the trend...Now, there’s renewed interest in gap plans. With monthly premiums on health insurance going up, more people are choosing cheaper, high-deductible options. In 2016, more than 90 percent of people buying insurance under the ACA chose plans with an average deductible of $3,000 or higher. Next year, the cost of one of the most popular plans available under the Affordable Care Act could increase by 10 percent on average across the country. That comes on top of a 5 percent jump the year before. When consumers see those prices, Hillenbrand said, “they get sticker shock.”

"Insurance for my insurance." According to Harry Reid, that young woman just needs to flip through a few more newspapers, or something.  Hillary's advice isn't any better.  The only "solution" Democrats can muster is more failed government, and more failed spending.