Dems Warn GOP on Obamacare Repeal: 'They Break It, They Buy It' 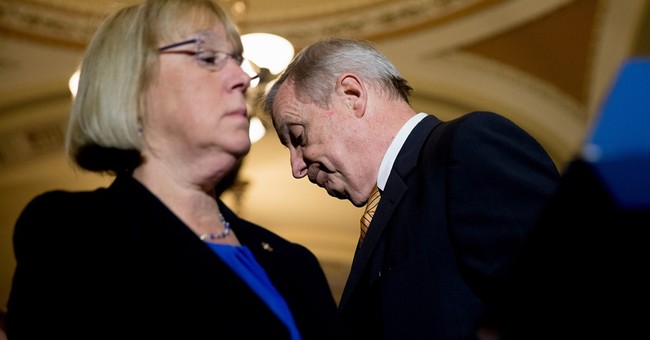 As we've already discussed at some length, the triumph of Donald Trump in the presidential election -- coupled with the GOP maintaining majorities in both the House and Senate --means that there is finally a realistic legislative avenue to repealing and replacing almost all of Obamacare. Congressional Republicans say this will be an immediate priority starting in January, Democrats' potential clogging of the Senate calendar notwithstanding. On '60 Minutes' Sunday evening, House Speaker Paul Ryan affirmed that beginning the process of uprooting Democrats' empirically failing and disproportionately harmful law will be at the top of his agenda:

He makes a few good points here: First, when challenged about whether ram-rodding through a repeal bill without bipartisan consensus would simply replicate the very same mistake Democrats made in 2009 and 2010, Ryan notes that the circumstances are quite different because (a) the damaging effects of the law are now undeniable, and (b) unlike the Democrats' power play at the onset of the Obama administration, Republicans have actively campaigned on repeal for years -- winning three of the last four elections while riding that central plank. Even in 2012's status quo election resulting in another Obama term, a plurality of that year's heavily-Democratic electorate believed the law should be eliminated. President Obama won re-election despite public opinion on his central legislative accomplishment. In short, nobody will be able to credibly claim they were blindsided by GOP efforts to roll back the law. They've been explicitly promising to do precisely that since 2010. It's now time to keep the promise made to the American people, which is logistically feasible thanks to November's outcomes.

Second, Ryan previews his approach to the politically-dicey two-step of repeal and replace: Start teeing up the pieces for "reconciliation" right out of the gate, which sets the stage for extirpating core sections of Obamacare with a simple Senate majority -- a de facto repeal.  Next comes the more challenging step of passing a replacement law.  Ryan suggests that key provisions of Obamacare will be set up to expire over a period of a few years, so that people's coverage wouldn't be abruptly ripped away, which is what happened to millions of consumers under the law in 2013.  The New York Times has more details on the "emerging repeal and delay" strategy:

Republicans in Congress plan to move almost immediately next month to repeal the Affordable Care Act, as President-elect Donald J. Trump promised. But they also are likely to delay the effective date so that they have several years to phase out President Obama’s signature achievement. This emerging “repeal and delay” strategy, which Speaker Paul D. Ryan discussed this week with Vice President-elect Mike Pence, underscores a growing recognition that replacing the health care law will be technically complicated and could be politically explosive...Unwinding it could be as difficult for Republicans as it was for Democrats to pass it in the first place and could lead Republicans into a dangerous cul-de-sac, where the existing law is in shambles but no replacement can pass the narrowly divided Senate. Democrats would face political pressure in that case as well...“We are not going to rip health care away from Americans,” said Representative Kevin Brady, Republican of Texas and chairman of the Ways and Means Committee, which shares jurisdiction over health care. “We will have a transition period so Congress can develop the right policies and the American people can have time to look for better health care options.” Senator Lamar Alexander, Republican of Tennessee and chairman of the Senate health committee, said: “I imagine this will take several years to completely make that sort of transition — to make sure we do no harm, create a good health care system that everyone has access to, and that we repeal the parts of Obamacare that need to be repealed.”

Those quotes from Brady and Alexander underscore the "orderly transition" Ryan mentioned to CBS News, which is a smart talking point.  Voters hate uncertainty perhaps just as much as they hate Obamacare.  The prospect of even more sudden and open-ended chaos would not play well politically.  But the Times piece also quotes healthcare experts who say "repeal and delay" would be logistically very messy, and could wreak some havoc upon an already-jittery and unstable industry.  Some conservatives have also cautioned against the possible pitfalls of this game plan as well, warning that hollowing out much of Obamacare while necessarily (due to reconciliation constraints) leaving some major lose strings twisting in the wind could hasten the meltdown of the individual market.  Plus, some say, Democrats have a built-in political incentive to refuse to cooperate with any replacement legislation.  If Obamacare phases out, then worse dysfunction ensues because there's no new plan in place to address myriad concerns and dynamics, Democrats will point the finger of blame at Republicans.  Sen. Patty Murray, a member of Chuck Schumer's leadership team, expresses this sentiment rather bluntly here:

Gathering those 60 votes will prove difficult, so the GOP hopes the transition period and end-date on Obamacare will also give Republican lawmakers leverage with Democrats by forcing them to come off the sidelines and participate in rebuilding the health care system, even after opposing GOP efforts to tear it apart. "The blame will fall on the people who didn’t want to do anything,” McCarthy said, foreshadowing a likely GOP talking point should Democrats block a replacement plan. But Democrats said the GOP plan to put the onus on the minority party won’t work. “They break it, they buy it,” said Sen. Patty Murray (D-Wash.), a Democratic leader.

And there you have the likely fault lines of the coming debate.  Yes, there's certainly inherent risk here for Republicans (although whiffing on their number one pledge to their voters is the bigger risk), but that's no less true for Democrats.  The fact is that they already broke Obamacare, concocting a shambolic mess of a healthcare experiment that has vindicated almost every single major prediction from critics, then jamming it down the throats of an unwilling public -- and sticking taxpayers with the $2 trillion tab.  They broke it and forced us to buy it.  Republicans would advance the accurate case that not only is Obamacare not working -- even citing the Obama administration's own numbers to buttress the point -- but that it will continue to get worse as the individual market spirals downward, due to enrollment shortcomings and demographic problems.  Something must be done to fix the Democrats' mess, starting with the promised and essential repeal of most of the law.  Any replacement plan must make coverage more affordable for more people, accommodate those with pre-existing conditions, and will probably keep certain popular provisions like allowing adult children to stay on their parents' plan through age 26.  Here is a clear, basic outline for how to get there, which largely aligns with what Republicans are proposing.

If Democrats make the system worse with Obamacare, then stubbornly refuse to even allow votes on a new system once their currently-crumbling regime is dislodged, that won't be easy to defend.  They will have broken healthcare again, for purely political reasons.  One wonders: How would that mindless obstructionism play with voters in the nine Trump-won states where Democratic Senators are up for a vote in 2018?  I'll leave you with yet another broken Obamacare promise.  Remember how the law was supposed to bend the healthcare cost curve down -- not slow the rate of increase, which has become the Left's go-to misleading spin, but actually bend it down?  Yeah, about that: